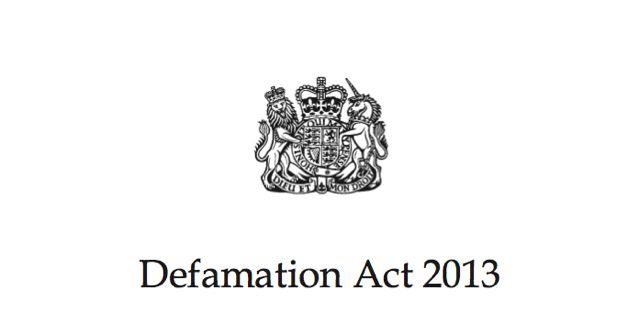 On January 1 2014 the Defamation Act 2013 came into effect in England and Wales.

Northern Ireland retains the old law. A law described by the UK as a “national embarrassment” and by the US as “repugnant” to their Constitution. A law slated by Geoffrey Bindman QC in 1994 as “seriously unbalanced and fundamentally flawed”. In fact, the US enacted the SPEECH Act in 2010 whose very purpose was to nullify and negate the chilling effect of our speech law on their US-based journalists.

Background to the Defamation Act 2013

The campaign for the new law began in 2008 when the scientist Simon Singh (@SLSingh) was subjected to a misinformed and illiberal libel action by the British Chiropractic Association. The action came after Singh wrote in the Guardian that the claims of chiropractors were “bogus”. Their claims were that they could treat the many ailments of the child by manipulation of the spine.

The action against Singh represented a serious incursion into the freedom that scientists enjoy to debate, make inquiry and freely investigate. This triggered a backlash from freedom of speech advocates and gave birth to the vocal and formidable Libel Reform Campaign. The three largest parties also backed reform in their 2010 general election manifestos.

In mid-June 2012 Sammy Wilson took a single and unchecked decision to halt the extension of the Defamation Act 2013 to Northern Ireland. The decision was made away from the executive and away from the other parties, and no explanation was given to the public. Libel law is a reserved matter and therefore a matter for the devolved Stormont Assembly; however the Executive could have directly implemented the new law by way of a legislative consent motion.

Sammy Wilson vetoed the new law with a single, unchecked decision that people, the media and academics in Northern Ireland should enjoy weaker speech protections than people in England and Wales. The decision remained private for almost a year. A full explanation remains outstanding.

In June 2012 Scotland also decided against the new law. However where in Northern Ireland the law of defamation is in all respects identical, the law in Scotland has never been the same as in England and Wales. Furthermore, before Scotland rejected the new law, it held a consultation exercise and published a public explanation in June 2012.

In March 2013 it became public that Stormont’s Department of Finance and Personnel had declined to implement the new law. The reason for this remained unknown.  In April 2013 claims were made that the decision to veto the new law was taken by the Office of First and Deputy First Minister.

In May 2013 it became public that it wasn’t the DFP or the OFMDFM, but the Finance Minister who took a single, unchecked decision to block the new law. As Lord Lexden said, “It was only through the persistence of journalists that it emerged that a single minister had rejected the Defamation Act 2013.” (An earlier FOI request had been declined on ‘public interest’ grounds.)

In the same month Mike Nesbitt and a team of lawyers drafted fresh legislation by means of a Private Member’s Bill (the Defamation (Northern Ireland) Bill) whose effect would bring Northern Ireland into line with England and Wales. On the decision to veto the London law, Mike Nesbitt said that there had been a “shocking lack of consultation within the Executive… never mind with interested bodies and the public.”

In June 2013 Mike Nesbitt announced that he was introducing fresh libel legislation.

In July 2013 Mike Nesbitt wrote an op-ed in the Belfast Telegraph explaining his decision to table new legislation and said, of all his years in journalism, all libel suits had been served by local DUP politicians – the same party which took the decision to decline the reformist libel legislation.

In July 2013 the House of Lords moved into the debate when Lord Lexden tabled an amendment at the Committee stage of the Northern Ireland Miscellaneous Provisions) Bill . The amendment would have inserted “Northern Ireland” into the Defamation Act 2013. However, after months of debate, the amendment failed on 26 February 2014 when it was concluded that Stormont had primacy on the matter.

In September 2013 the newly installed Finance Minister Simon Hamilton asked the Northern Ireland Law Commission to “cast a fresh pair of eyes” on the defamation Act.

In December 2013 the Law Commission’s chief executive Judena Goldring returned to Simon Hamilton with the conclusion that “there ought to be a full public consultation on the issues here so that the people of Northern Ireland have a good opportunity to contribute to that discussion.” At that moment the Law Commission was required to await formal clearance from the Justice Minister before it could begins work on the project in 2014, whereupon it would submit a report to Executive ministers.

On January 28 2014 the public consultation into Mike Nesbitt’s libel bill closed with “overwhelming” public support for reform. The BBC, Belfast Telegraph and News Letter responded to the development here, asking why an issue of such consensus was blocked from entering Northern Ireland.

We should however be cautious of the Simon Hamilton review. There is reason to see it as procedural and perfunctory. As Lord Empey said:

In other words the Simon Hamilton review could be used as a tool to frustrate and derail the Nesbitt bill and to prevent libel reform altogether. These suspicions stand alongside compelling evidence. And here’s the evidence:

The DUP’s Sammy Wilson said that concerns about free speech were “just a lot of nonsense”. The DUP’s Ian Paisley Jnr made no less than 10 interventions criticising the Defamation Bill in its second reading debate in the House of Commons. The DUP said in March 2013 that libel reform is “not a matter of concern”. The leader of the DUP, Peter Robinson, said in November 2013 that he was “bemused” by concerns and said worries were “absurd”.  Ruth Dudley Edwards and many other journalists have spoken of the DUP’S “enthusiasm” for restrictive libel laws.

How do you reconcile these DUP assertions on libel law with a DUP-led review into libel reform? You can’t. The DUP has shown itself to be flagrantly opposed to libel reform. You can’t but draw the conclusion that the Simon Hamilton review is a mere act and formality to placate, divert and silence those view voices who are working to guarantee the people of Northern Ireland the same freedoms of speech that the rest of the UK enjoys.