You are at:Home»News & Current Affairs»Opinion»‘Finish the job’ says former President Bill Clinton – Do our politicians know what the ‘job’ is? – Asks Terry Wright.
Social share: 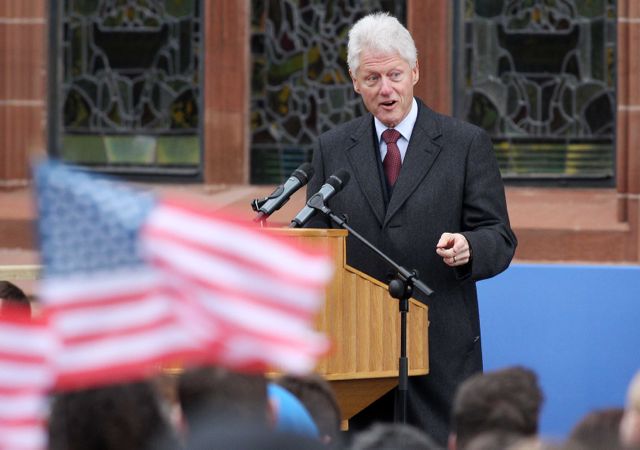 If it is true as J K Galbraith suggested that ‘ politics consists of choosing between the disastrous and the unpalatable’ then the call of former US president Bill Clinton that our politicians should finish the job is, in the current climate, unlikely to find a favourable response. Can it, in the context of Northern Ireland politics, be taken for granted how each perceives the job to be done?

The failure to find agreement on the Haass proposals, the outbreak of hostility, brinkmanship and anger over the handling of the OTR issue, the persistent disputes over flags, parades, the past and victims added to the failed choreography of Obama’s visit and the G8 summit followed now by the Clinton visit lend considerable support to the view that in the continuing conflict embedding the peace process and politics, the main protagonists are always opposed and operate from competing and uncompromising agendas.

Contentious and unresolved issues are always guided by the need to force the unpalatable on the other side in order to avoid what might be seen as disastrous by the perceived constituency from which support is sought. There is a failure to mediate one to the other.

Any new attempt at resolution is born trapped within this dynamic and mind-set. Instead of sustainable solutions, progress is achieved only through fudge and ambiguity. This lies beneath the radar as part of the problem until ignited by a new revelation or confrontation fuelled by the blight of sectarianism and bigotry.

The Westminster double-speak of past governments that survives as a living legacy of institutionalised half-truths and behind the door deals is an additional ingredient. The combined attempt by London, Washington and Dublin to bring a neat solution to a complex situation has succeeded merely in producing a flawed and untidy containment.

Espousing peace and renouncing violence, political leaders continue to contribute to an environment where violence can flourish not least within territorial, communal and hard-edged identities. Seemingly more comfortable with old problems than solutions and of long memory and limited grace, they continue to act as a monument to the past instead of providing footprints to the future.

This produces within a mandatory coalition that which can only work well through embracing diversity, mediation and inclusivity, shared ethics, aims and commitment to make the state work for all, a diminishing electorate which, for the most part, continues to vote for who they do not want.

In the absence of a viable alternative many are left disenfranchised and doubting the value and potential of politics. This produces a democratic deficit and the tyranny of a political elite whose opposing politics and individual strategies are counter-productive to change and progress. There is now a risk that, with the onset of RPA this will be further reinforced within the new more powerful councils. If wearing a football scarf can produce unbridled animosity this is a risk to stability, such as it is.

There is an argument for amending the political structures to provide for official opposition, reduction in MLAs and a slimmer Executive. Review is overdue but does the greater problem not lie within the essence of the politics?

It is this which indicates that the Assembly has reached the limitation of its capacity to change.

Within its structures politics seem to have abandoned the vision of reaching inter-party and inter-community consensus for the politics of incremental victory. Any unsavoury disclosure or incident, past or present, and unquestioning narratives are added to the tactical armoury and deployed. Such was a feature of the Haass process, at the time and since.

In the case of nationalism and more so republicanism, politics aspire to the narrowest of cultural and intellectual horizons. A sanitised narrative and mythology and as evidenced by the OTRs, an unscrupulous manipulation that never allows principle to hinder advancement of the agenda, characterises strategy and tactics.

Working at the end of the day towards the ending of the state whose name it dare not use, it survives on a sense of insularity and victimhood. It works to achieve through a political process what it failed to achieve through violence.

Unionism mistrusts everyone outside the family. Looking at issues through a set of experiences and a history that does not go away it reacts to rather than leads events. In spite of the reluctant manner in which it had to accept political change and a resulting feeling of defeat that remains within its psyche, it retains a belief that it is better than it actually is.

From time to time leaders within unionism talk of the need for change and an end to the social and sectarian obstacles that prohibit change but then retreat to policies and politics which reinforce them.

It is against this background that the desire and words of President Bill Clinton may be frustrated for you can never attain that which you fail to understand and you are unwilling to pursue.

The first necessity may not be getting people to finish the job but to agree what the job is.

Social share:
Assembly Bill Clinton Haass Northern Ireland
Previous ArticleWhy government is not taken seriously by Eamonn Mallie
Next Article Only “radical leadership and vision” of the young can save us argues Brian John Spencer