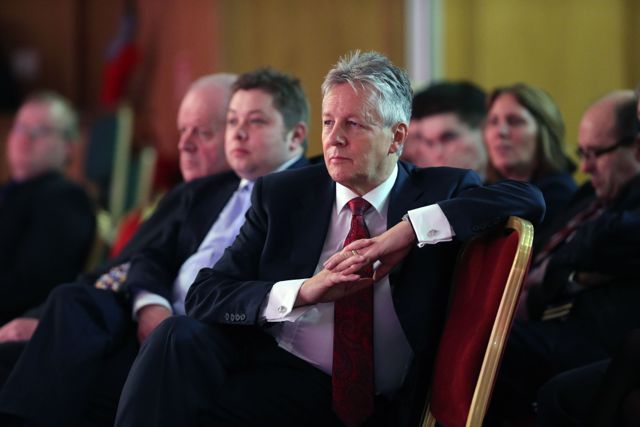 At the end of a week of a lot of huffing and puffing at Stormont with First Minister Peter Robinson threatening to ‘blow the house down’ what has changed? – Very little.

Mr Robinson took to the stage acting out a bout of outrage against perfidious Albion which did a secret little deal with Sinn Fein on the so called OTRs. These were people who had fled Northern Ireland believing the police might have an interest in them over 30 years but wanted to return when the Troubles ended.

The Blair administration in order to keep the political bicycle upright during the evolving peace process engineered a so-called  ‘Administrative Scheme’ to obviate the difficulty with the OTRs.  In the first instance the police set down benchmarks against which any application for an ‘on the run person’ to return home had to be measured. Sinn Fein processed the applications. A solicitor forwarded them to the police. The Director of Public Prosecutions in Northern Ireland and the British Attorney General were across all developments.

An attempt to bring in legislation to formalise all this at Westminster collapsed. Despite the fact that royal pardons and ‘letters of comfort’ had been currency in government circles for years going back to 2000 and earlier, the clamor for IRA decommissioning served to escalate republican demands with ever increasing numbers of names of people applying for permission to return to Northern Ireland.

The Blair government took no chances, as has the current Coalition Government to make sure the charge for ultimately delivering the ‘letters of comfort’ rested with civil servants on ‘the British side.’ As in the case of the so-called back channel involving secret talks between the British government and the IRA in 1993 only civil servants on the English side of the Northern Ireland Office were involved.

One Direct Rule Minister told me “knowledge of such in the hands of local civil servants would have tested their Unionism to the point of destruction.” Plus ça change in case of OTRs. Perfidious Albion.

So who was not afraid of the DUP’s Big Bad Wolf howling at his door? Prime Minister David Cameron certainly wasn’t.

He gathered around him in double quick time some of his finest civil servants who cleverly crafted a minimalist response to Mr Robinson’s tantrum pledging to appoint a judge to look at the inheritance of that bold and ‘constructive ambiguity’ left by his predecessor Tony Blair.

Peter Robinson promised he would resign as First Minister if certain conditions were not met by Mr Cameron: the government would have to rescind the letters of comfort, resile from the Administrative Scheme and put a judicial inquiry in place to investigate the whole background to the process.

David Cameron didn’t even meet one of the FM’s demands apart from a phone call to him and the confirmation that he was appointing a judge to examine the modus operandi of the Administrative Scheme pertinent to each of the ‘letters of comfort’ afforded to the OTRs.

He said he accepted calls for a “full, independent examination” of the process, adding:  “We will appoint an independent judge to produce a full public account of the operation of this administrative scheme to determine whether any other letters were sent in error.” This was a reference to the collapse of the case of Donegal man John Downey  who had asked the police in Northern Ireland if his name was on a wanted list. His London appearance in a court hearing in connection with the Hyde Park bombing from which he walked free armed with an OTR letter, triggered a minor earthquake with the molten lava pouring over a DUP landscape obsessing with imminent elections.

In the wake of a call from the Prime Minister Peter Robinson immediately declared with his European candidate Diane Dodds by his side he would not resign and excitedly added  “if you get what you want why on earth would you resign.” He fooled nobody.  It is simple: you would resign if you didn’t get what you wanted.

One wonders what elixir Mr Robinson swallowed overnight to lower his high blood pressure. Suddenly the smile switch was turned on and the scowl had vaporised.

Thinking journalists and Jim Allister QC (the bad wolf of the Assembly) who had clearly read the Downey judgement unlike many of his colleagues, immediately recognised the sop David Cameron gave to Mr Robinson.

The judge led ‘review,’ not ‘inquiry’ has very limited powers: no capacity to subpoena witnesses, to command papers, to compel witnesses to go on oath, or hear evidence in public etc.

If Peter Robinson had a bad week SOS Theresa Villiers left poor David Ford holding a very difficult child. She revealed OTRs is now a devolved matter. Mr Ford hadn’t a clue about this as Justice Minister. The SOS’s English civil servants in the NIO were taking care of these matters. Worse was to follow from where Peter Robinson and David Ford stood: The Justice Minister was eventually told the NIO is currently addressing six more OTRs cases.

This was proof positive that David Cameron had not resiled from the Blair necessities of the Peace Process and added to the facts that in 2012 the Coalition government had addressed thirty-eight OTR casess. Even Jim Allister the most unadulterated loyal royalist was now talking about “the perfidious British government.”

Insult was added to injury when Theresa Villiers revealed that she was now writing to all OTRs what they already knew: The cold soup was being reheated.

“The letters did not amount to immunity, exemption or amnesty from arrest. The letters made this clear. That remains the case. No recipient of such a letter should be in any doubt that if evidence emerges in the future in connection with terrorist offences committed before the Belfast Agreement they will be liable for arrest and prosecution” She wrote.

It is absolutely disingenuous of Republicans to go on stating that this OTRs ‘invisible process’ enabled me or others to see these letters of comforts for the OTRs.

There will be further fallouts from this OTRs saga. Secret documents may well surface. I am keeping an eye on the post and I won’t be alone.