You are at:Home»News & Current Affairs»Opinion»‘The Politics of Frustration’ by David McKittrick
Social share: 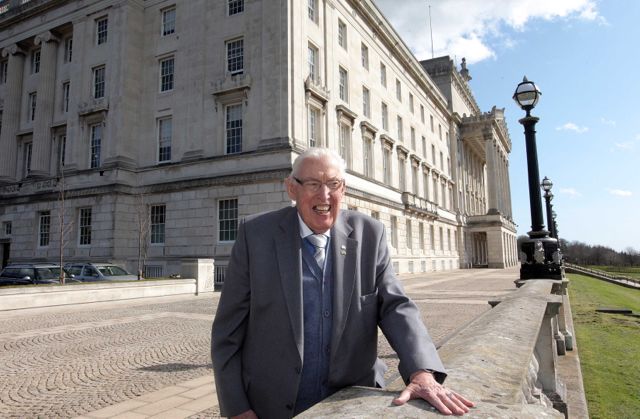 Harry Midgley was a now largely forgotten politician who was active in Belfast from the 1920s until the 1950s. Midgley’s political journey took him from his early days – when loyalists called him a Bolshevik – to a ministry in a unionist government.

Although more than half a century has passed since his death, the title of Graham Walker’s biography, The Politics of Frustration, seems to sum up the current state of play in Belfast.

Frustration hangs heavy in the air. The Haass talks kindled a little flutter of hope of a breakthrough but it didn’t happen, and it seems unrealistic to expect progress in the lead-up to the May elections.

Next will come the lead-up to the Twelfth, when much of the middle classes fly out to the holiday sun while a small but raucous section of the working classes takes to the streets. On past experience real politics is unlikely to make a re-appearance before September.

The last fifteen months or so were pretty tragic for Team Northern Ireland, for politics and for the general atmosphere. They were tragic too for the scores of loyalists who took to the streets with such abandon, exhibiting a fusion of righteous rage and recreational rioting. The dismal legal sequels for some of them have been criminal charges, convictions, prison sentences and diminished prospects for future employment.

Loyalists often have difficulty defining their heritage, but sadly time spent behind bars for rioting has become incorporated into the working class culture of some parts of the inner city.

And all that disruption and disorder has not worked for them, for it has yet to produce any real movement towards what they want on marching and flag-flying. Nor has it produced any lessening of their sense of alienation from the political mainstream.

Richard Haass, meanwhile, must be one of the most frustrated figures of all, since hammering out those seven drafts intruded so much into his Christmas. Even a partial breakthrough could have made it all seem worthwhile, but he left empty-handed.

Nobody thinks the failure was his own fault: most commentators blame the fractured state of unionism, since it was the only section of opinion to reject his seventh draft.

But whoever is held to blame, the residual effect in London and Dublin will probably be to park the issue for some other time since nobody can be found in either capital who thinks that one more push will solve Belfast’s problems.

Nationalism and unionism are both in a state of exasperation, though the former tend more towards irritation than downright anger. They object to what they view as the spectacle of the DUP indulging in the politics of the lowest common denominator and exhibiting timidity in the face of DUP hardliners, street protesters and sections of the UVF.

They think that a few years ago unionist politicians and activists momentarily and commendably emerged from the traditional trenches but have now clambered back into them.

In becoming First Minister Ian Paisley raised his head above the parapet and, as at Christmas-time during world war one, figuratively joined in a game of football with republicans in no-man’s land. But then the old guy fell victim to snipers from his own lines, the DUP concluding that its natural habitat was back in the trenches.

In the 1970s John Hume used to characterise the unionist mindset as one of insisting on holding all power in their hands, and refusing to cede any element of control.

Today that is not an option. Stormont, once the massive sandstone symbol of unionist mastery, is now a symbol of shared government, for without a Sinn Fein presence it would shut. And while the institution is regarded with something close to disdain by most of the populace, hardly a single voice advocates boarding it up. Few think it does things well, but hardly anyone thinks it should be scrapped.

Its continuing survival is fine by nationalists, both Sinn Fein and the SDLP, who from their very different perspectives value it. Both complain of unionist foot-dragging; and both of course retain their aspiration for Irish unity. Yet both appreciate the Assembly, both note that the unionist majority is dwindling and both note that the sense of inequality which once characterised nationalism is today greatly reduced.

So while there is certainly a measure of nationalist frustration, it is not nearly as marked as within the unionist psyche. Its political leaders have the major say in the administration, but there are few signs of self-confidence among them, and few signs that their grassroots have strong confidence in them.

The retreat to the trenches has bought no new sense of security. It is difficult to know how the garden-centre Protestants would have reacted if Peter Robinson had signed up for the Haass deal. But the fact that he did not brought no new surge of support for the DUP; rather it produced something closer to resignation rather than relief.

One of the inbuilt flaws of unionist political leaderships is their innovation deficiency. Very little in the way of new ideas or bold moves has originated in that quarter, which helps explain why many unionists lack a sense of ownership in the peace process.

There is too the lack of a sense of mission. Nationalists and republicans often display more of a sense of purpose, even if things very often move more slowly than they would like. The lack of direction on the unionist side is one reason why they are more prone to frustration and underlying anxiety.