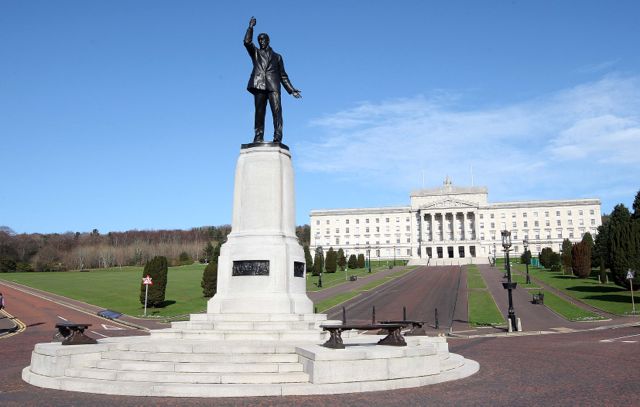 When the Hyde Park bomb news broke I was horrified.

On the rule of law and due process, immunising and exempting credible suspects who face credible evidence from justice – by way of unchecked, secret letters – represents a serious blow to western democracy. We are all bound on equal terms by a common code known as the rule of law. Upon that equality we share a sense of shared society. Exempt a few from the standards you impose on the many and you risk serious societal breakdown.

On the actual politics, I felt utterly dejected. I wanted to join the so many in Northern Ireland who have exempted and absolved themselves from the whole process.

On the debate I felt unable to comment. It was before my time. It was a matter for victims. Frighteningly complicated, too deranged a political quarrel, a forever cycle of claim and counter-claim.

On the future, I feared for our ability to move the political economy forward and for our “normalisation”.

Then I thought of the counter-narrative: Of the “other Northern Ireland”. That world which has liberated itself from sectarian debate and from unionism and nationalism (the world Heaney and others said). Those people – young and old, victim and non-victim – who know nothing of the past and want nothing to do with the past. The world we hear little or no word of.

“Get yourself educated and get out of here… We are going to have to leave it to another generation.”

These words then fixed my mind; spoken by the son of a woman murdered by a loyalist death squad. When I heard them, I felt it imperative to say something.

For every relative of a victim who wants the truth, there’s a relative who wants to move on. Like the South African Kader Asmal. Like Kevin Skelton of Time To Move On.

For every fanatic, there are hundreds of moderates.

For every Jamie Bryson, there are 1000s of pro-agreement, pro-compromise unionists who recognise that Sinn Fein did not land in office by some dreadful accident, but by the good faith of a very many people who gave the party their vote.

For every belligerent politician who stood at the Haass talks and held out on a deal, there were thousands of unionists who wanted a deal, a deal they did not get and an explanation for which are yet to receive. For every Sinn Fein call for justice there is a duplicitous support for amnesty.

The victim, fundamentalist and the fanatic dominate the agenda. What of those like Hannah Nelson who have utterly divorced themselves from the squabble?

Hyde Park is not the only affront to justice; giving a hearing only to one half of Northern Ireland is unpardonable, an affront to a free and fair society. (Excuse the cliche but…) Democracy does not start and end at the ballot box – we need to hear from other persuaded, passionate voices. Believe it or not, it’s not just the victim, fundamentalist, loyalist, Orangeman and fanatic who has unalterable convictions, cherished traditions and unshakeable values.

Secondly (looking more specifically at the unionist half of the “other normal Northern Ireland”) the DUP should give careful thought to those many Protestant unionists not installed at Twaddell, protesting or waving a flag, or those not talking about a “holy war” and the “extermination” of Protestants.

Here’s my point. If the DUP allows its reaction to the Hyde Park opacity – which needs enlightened – to be one dictated by these forces, they risk further alienating moderate unionists. Unionists who look at Twaddell and claims of “holy war” with a fathomless and unspeakable disbelief.

To reiterate, I condemn the sending of secret letters; the sending of which should be fully investigated. I quite agree with Colonel Tim Collins here. Sunlight is the only remedy and only way to regain the trust and accountability of the public.

Within the “other Northern Ireland” there is a huge body of Protestant unionism that is utterly at odds and variance with the current trajectory of political Unionism. As it’s been said:

“Loyalists are doing a grand job of demonising Unionism and encouraging educated Protestants to leave NI.”

“If we absolutely must speak of “exterminating” certain communities and “eroding” a culture, it is moderate and middle class Protestants who are being “exterminated”.

Look at this young man who’s resolved on his intent to leave Northern Ireland to escape the madness.

“When I’m finished with my degree I’m probably going to get the hell out of Northern Ireland, I’m sick of the same old bull**** sectarian arguments peddled over and over again.”

Look at this young woman studying in the US who said Americans have an incredibly negative perception of Northern Ireland because of a delinquent minority:

“Why do those people always behave like such freaks? That tiny minority makes them all look like a bunch of losers dude.”

Look at this young man, born in Northern Ireland, now living in Australia:

Or this Protestant taxi driver who said that politicians do too much to appease the “nutters”:

This is the whole history of moderate, middle class unionist in two lines. And of course, Irish senator and protestant, David Norris, spoke for so many Protestants when he called last summer’s loyalist rioting an “appalling embarrassment”.

Violent loyalists, hardliners in the OO and political fundamentalists habitually, serially and routinely bring Northern Ireland into disgrace and incur the contempt of the world. In doing so, they create a cold house that alienate moderate Protestants and forces them to opt-out of the civic process. This has given rise to two phenomenona:

One, we have what Brian Feeney called the internal émigré  and what Alex Kane suggests could be called, “Opt -out-couldn’t-care-less-about-the-whole-thing-anymore unionism.” As Feeney said:

“None of these internal émigrés participates in or endorses the antics of the yahoos waving flags or hammering big drums outside Catholic Churches… [the Haass talks]failure will simply reinforce the majority of unionists in their opinion that, in the words of Alex Kane, they prefer to go to the garden centre that bother voting.”

Two, we have what we could call the external émigré. The same as the internal émigré, entirely divorced from Northern Ireland life, but living, often forced by political and economic circumstances, abroad.

People have long spoken of middle class Protestants being raised and schooled in Northern Ireland, then exported to university or to work abroad, never to return. In April 1982 Sir Peter Frogatt, vice-Chancellor of QUB said there was “a considerable exodus to British universities especially on the part of the Protestant community.” In May 2008 a study found that two-thirds of students from Northern Ireland do not return to the province in the short to medium term. It also found that Protestant school leavers (34%) were more likely than Catholic school leavers (23%) to migrate to study in Britain.

In 2011 Stephen Farrey revealed that a third of the 35,000 students attending university in Northern Ireland are Protestant. Only a fifth at Magee are Protestant.

It leans towards Protestants, but ultimately it cuts both ways. The bottom line is, we’re sacrificing our best and brightest on the altar of mindless sectarian squabbling. As David McCann said, ‘Northern Ireland’s greatest challenge is the loss of the best of our next generation.”  This – not flags, parades and the past – should be animating minds.

The protestant brain-drain is not only a detriment to our local economy, but it also condemns and exacerbates “brain-dead” unionism and loyalism. (Perhaps some of our protestant émigré friends could come back and give loyalists the political education that veteran loyalist Raymond Lavery said they so desperately need. Certainly they would surely be keen to extinguish loyalism’s terrifically damaging “phantom fears”.)

The Hyde Park Bomb case needs addressed, and in full. However there are broader issues that must be faced. We cannot allow fringe unionism to dictate events. We must hear from the “other Northern Ireland”: those who don’t want Sinn Fein playing the sore thumb policy for a United Ireland, or the DUP playing bogey-man politics with impressionable loyalism. Moderate unionism needs to reclaim that cause, only they can offer an open, welcoming, persuasive, Catholic-friendly and ‘unremittingly positive’ case for the Union.

The Union needs to be saved from unionist extremists who say they’re British but operate by Ulster nationalism, a code opposite, antithetical and hostile to Britishness. All they do is give an unremittingly negative case for the Union and in doing so make the argument for secession.