You are at:Home»News & Current Affairs»Someone pulled the trigger – but others pulled the strings – by Brian Rowan
Social share: 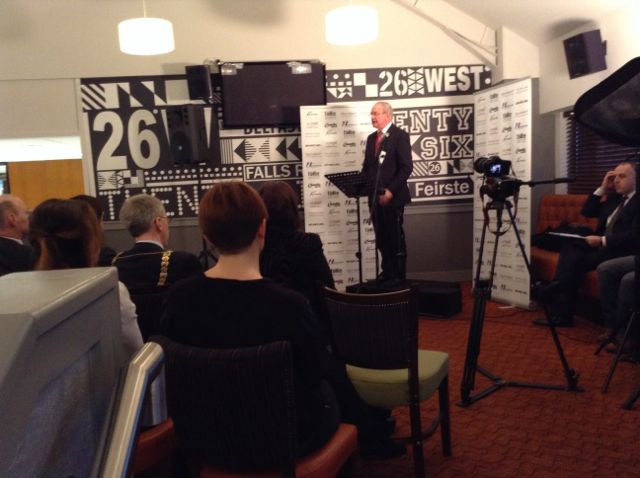 Sometimes we get little reminders of just how far we have travelled in the peace process.

I thought about it as I made my way to west Belfast this morning with colleague Eamonn Mallie; thought about it because the road and route we took was the same one we journeyed almost twenty years ago back in August 1994.

That day we were met by a woman who read to us the words of the IRA ceasefire statement – declaring the “complete cessation of military operations”.

Much has changed since then and, this morning, you could see and feel it.

Nobody  blinked an eye. There was no protest outside – no need for the police.

This was the normal/routine stuff of peace building after the abnormal years of conflict characterised in the hundreds and thousands of Bloody Days.

The organisation of which  McDonald is part –  the UDA – killed solicitor Pat Finucane on one of those Bloody Days, exactly 25 years ago on this date.

Someone pulled the trigger, but others pulled the strings, and the search for that information continues. 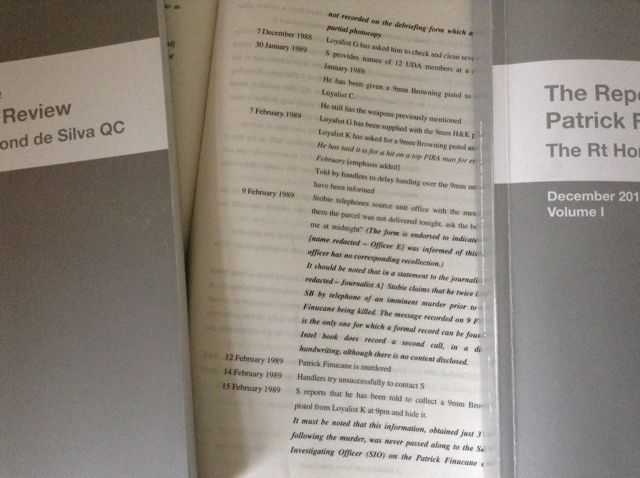 It is but one chapter from the conflict years.

Others will have their questions for McGuinness and McDonald and for the organisations of which they were part and finding the process and place within which that can be done is part of what still has to be achieved.

In west Belfast this morning, McGuinness said he was involved in further talks yesterday trying to advance the proposals that are part of the Richard Haass and Meghan O’Sullivan text written and left here weeks ago at the end of a long consultation and negotiation.

The political brakes have since been applied by the Unionist parties, either unable or unwilling to build the structure that was suggested – the Historical Investigations Unit, the Independent Commission for Information Retrieval, an Implementation and Reconciliation Group in a monitoring/oversight role, an Archive for all stories and agreed statements of acknowledgement.

Those are the Haass/O’Sullivan jigsaw pieces when it comes to the past, but what is not clear is whether the picture will ever be made.

This is the unfinished business of the peace process, but what we got this morning was a glimpse of the progress so far.

It was coloured in that breakfast picture of tea and coffee cups and bacon and sausage baps – seen in who was mingling and talking and heard in the words of McGuinness when he very clearly and deliberately acknowledged McDonald’s contribution to the peace process.

The political message in this setting was about the need to do things together and the importance of political stability to allow businesses to grow.

It wasn’t a morning of ‘whataboutery’ – but more, what about the next steps?

There is still a political play to small street crowds.

We still hear the dissidents through their bombs and bullets, and we watch elements of loyalism – particularly the UVF in east Belfast – fall into deeper criminality.

Their guns are no longer about defending Ulster, but about protecting money-making turf from intruders.

To describe their activities as breaches of ceasefire would be to suggest some cause when, in truth, the motivation is self interest and self gain.

The republican dissidents know they are in ‘wars’ that cannot be won, and all of these armed factions – loyalist and republican – need to be challenged to explain their actions.

This is all part of what still needs to be done but, this morning, we watched what has been achieved and what is being achieved.

We have come a long way since 1994, and the question is how much further we want to go?