You are at:Home»News & Current Affairs»There are those who will never forgive the ‘No’ man of Ulster politics – by Brian Rowan
Social share: 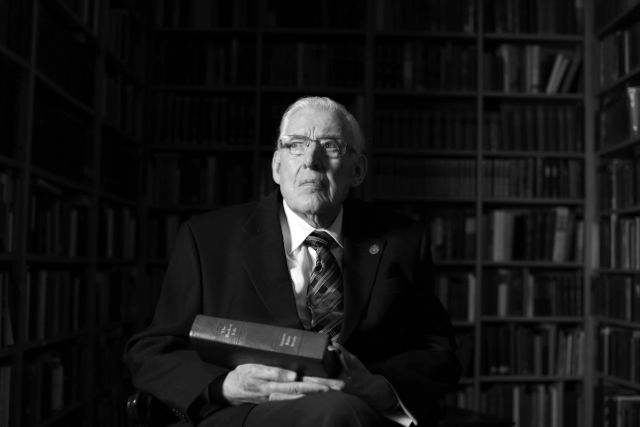 Six years ago the writing was on the wall.

With his son Ian’s resignation as junior minister at Stormont, the counting of the days began.

The question – how long could an ageing Ian Paisley senior survive as DUP leader and First Minister?

In the Belfast Telegraph in February 2008, I wrote: “Paisley senior has grown more and more dependent on his son – especially in the work of complex and detailed negotiations.

“The son’s resignation as junior minister will, it is expected, make shorter his father’s reign as First Minister.

“The only question now is when to go – and some believe it could be sooner rather than later.”

The announcement came within days – clearing a path for Peter Robinson and, in part 2 of his documentary Paisley: Genesis to Revelation, the editor of this website Eamonn Mallie will shovel to the surface more of the deep background detail of that period.

Back then, Paisley left with a smile on his face, but in this in-depth and exclusive interview with Mallie, we see a different man, and we also hear a scathing criticism of one-time party friends and colleagues delivered in the words of Eileen Paisley.

Six years ago, I wrote that it was the right time for Paisley to go.

This was after the battles over decommissioning, and twelve months after he had made his agreements with Sinn Fein – a deal that delivered a once unthinkable partnership at the top of the Stormont Executive.

It was widely accepted, that only Paisley could take things to that point.

“He had the courage to take the process across that line knowing that it would not be favoured by so many of his own followers,” one of the church witnesses to IRA decommissioning Rev Harold Good told this website.

“But he knew it was the right thing to do and that must be recognised and acknowledged,” the former Methodist President said.

That new political arrangement put the man of ‘Never’ and ‘No’ into partnership government with Martin McGuinness, with the republican who had a key role in directing the IRA’s ‘long war’.

That was in 2007 and, a year later, as Paisley announced his exit from the stage, republicans were concerned.

They believed, that for all his waiting, this moment of leadership had arrived too soon for Peter Robinson.

Their argument was that the process and the new political arrangements at Stormont needed more time under Paisley’s leadership – more time to bed in.

Inside the DUP, however, that leadership change happened – and it happened with still more battles to be fought.

As Paisley stepped aside for Robinson, there was another issue to be resolved – the continuing existence of an IRA ‘Army Council’ blocking the route to the devolution of policing and justice powers.

Again, the politics of demand had to give way to compromise.

The IRA dismissed the idea of photographic proof of decommissioning and rejected calls for a public standing down of its leadership.

Now, six years into the Robinson reign, we see another standoff involving the DUP and Sinn Fein.

Some months ago, it was the row over the First Minister’s unilateral decision to shelve the Maze Peace Centre project and, now, it is a very public and bitter  battle over the implementation or non-implementation of the Haass/O’Sullivan proposals on flags, parades and the past.

In recent days, Robinson accused McGuinness of speaking “as if he is not one of the parties but rather the controller and dictator of how the process will operate”.

It brought this response from the deputy First Minister: “Suffice to say this.

“There has been a leadership deficit within some sections of political unionism for a long time.”

So, we see and hear the strains within this partnership.

McGuinness and Paisley came to be known as “The Chuckle Brothers” – Robinson and McGuinness as “The Brothers Grim”.

Sinn Fein and the DUP are a political odd couple – and under the leaderships both of Paisley and Robinson there have been those within their party who have struggled and who still struggle to come to terms with being in government with republicans – in the same political place as the enemy.

Earlier this year this website reported how the relationship between Robinson and McGuinness came close to breaking point.

So, how can it be characterised today – six years after the political events of 2008?

Still strained, still terse on occasions and still with a distance to travel to complete the unfinished business of politics and peace.

Should we be surprised?

After all this place has been through in a decades-long conflict, the answer to that question is no.

Today – almost seven years after that once unthinkable agreement was confirmed in May 2007 – we still have times when politics falters and flaps and fails.

What we don’t know is how far the elastic band can be stretched before it eventually snaps.

(Part Two of Paisley: Genesis to Revelation – face to face with Eamonn Mallie can be seen Monday January 20 10.35pm BBC1)

(Brian Rowan is author of Paisley and the Provos)