You are at:Home»News & Current Affairs»Marking Time in the Homeland of the Dead
Social share: 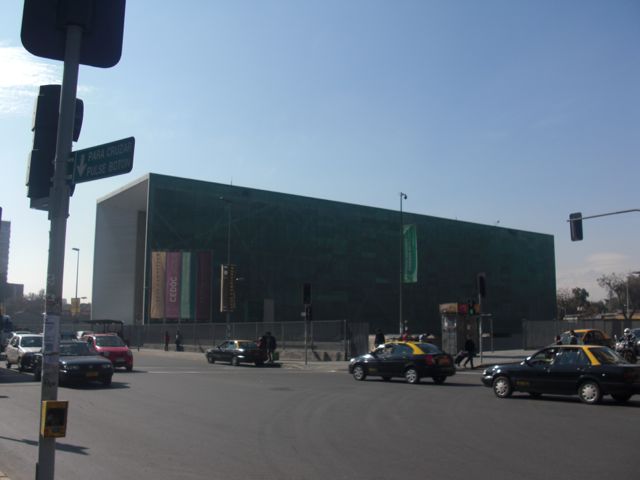 On a recent visit to Santiago in Chile I toured the incredibly moving Museo de laMemoria y los Derechos Humanos (Museum of Memory and Human Rights) on the 40th anniversary of the bloody coup d’état led by General Augusto Pinochet against the Marxist President Salvador Allende on 11 September 1973. The military dictatorship lasted until 1990 when a democratic political transition came into play, which has been steadily embedding itself in Chile over the past quarter century.

The museum is striking architecturally; its copper and glass frame juts out onto Catedral Street, opposite the large Quinta Normal Metro station and park, which maximises its visibility to visitors and passers-by. The closer you get to the building the easier it is to see inside it, a welcoming and formidable open-plan construction with an adjoining piazza used for open air concerts and events.

This transparency is central to the museum’s purpose: ‘To make known the systematic human rights violations by the Chilean state between 1973 and 1990 so that ethical reflection about memory, solidarity and importance of human rights nationally will be strengthened and that Never Again will these events that attack human dignity be repeated’.

When the museum was opened on 11 January 2010, the Chilean President Michelle Bachelet (herself a Pinochet era political prisoner, who has recently returned to power in the December 2013 Presidential elections) reaffirmed the museum’s purpose when she said that ‘we cannot change our past, we can only learn from it’.

Visitors can see in chronological order how the hopes and dreams of many people were shattered when the Allende government failed in its bid to deal with the economic crisis. It was the unbridled political populism of the dogmatically leftist government that paved the way for a coup by a conspiracy of senior military leaders led by General Pinochet.

The museum’s exhibits are organised so that visitors set off on a journey that encourages personal reflection on the enormity of the human rights abuses perpetrated by Chile’s dictatorship – with killings, tortures and forced disappearances coming to the fore as visitors move up through the museum’s three floors.

Each exhibit is forensically constructed, with documents, oral testimonies of victims, survivors and even the perpetrators themselves telling the story of the overweening bureaucratic process of population control built up by the ruling military junta.

The centrepiece of the Memoria y los Derechos Humanos is an emotionally powerful photographic montage on one wall depicting the 3,185 people subjected to execution or forced disappearance. On a viewing platform opposite, visitors can search an interactive database for information on all of those killed between 1973 and 1990.

Chile has come a long way in its democratic transition and is now a reputed model for how other divided societies have come to terms with a traumatic past. However, what struck me most about the museum was the commitment to pluralism in a way that emphasises the need to acknowledge the mistakes of the past, in a responsible manner, so that space can be created to build a positive future based on truth, reparation, justice and remembrance.

As the museum’s brochure makes clear, it has been vital for Chileans to ensure that the human rights abuses of the Pinochet era (approximately 40,000 people were imprisoned by the regime, many of them tortured) are never repeated and that the story of 11 September 1973 is used as a warning for future generations.

It is a sign of Chile’s political maturity – and a practical measure taken to heal the rifts between those supporters and opponents of the Pinochet regime – that the brochure also carries a foreword by renowned Chilean poet Raul Zurita highlighting the context in which human rights abuses were perpetrated. Zurita admits that those responsible were, ultimately, ordinary Chileans:

They don’t come from an unknown planet, nor were they born on another galaxy, but in our own country, in our own cities and towns, they moved through the same streets, attended our same schools, shared our same limitations and accomplishments, suffered our same disappointments. To grasp, if just for an instant, that not only could we have been one of the assassins, is perhaps the most painful lesson our recent history obliges us to learn.

For Zurita, Chileans ought to recognise that they are ‘alive in a homeland of the dead’.

There are echoes of the pervasiveness of dead generations elsewhere in Chile’s cultural milieu. The country’s most celebrated poet Pablo Neruda (1904-1973), no stranger to the brutal excesses of fascist dictatorships, wrote convincingly about the need to resist the haunting of life by absent friends, however painful it might be. In his poem The Dead Woman, written at the time of the Spanish Civil War (1936-39),the Nobel Prize winning poet observed how, ‘If suddenly you do not exist, / if suddenly you are not alive, / I shall go on living’. Neruda’s words certainly resonate in light of the events and terrible consequences of 11 September 1973.

My visit was an education in how one divided society has sought to deal with its troubled past in a sensitive and inclusive way. This was brought home to me when I interacted with Chileans themselves, many of whom were prepared to talk to me about the democratic transition with a huge degree of honesty and modesty.

It has since caused me to reflect on how people in Northern Ireland might learn from Chile’s transition in a cathartic and meaningful way that could, perhaps, provide inspiration for a more sustainable peace and reconciliation process closer to home.

People in Northern Ireland will readily recognise the contrasts, rather than the comparisons, between Chile’s troubled past and their own.

Whatever happened in Northern Ireland between the late 1960s and 1990s cannot be said to have resembled the long years of military dictatorship in Chile.

From the creation of the state in the early 1920s to the outbreak of the ‘Troubles’ in the late 1960s, the one-party unionist state represented a triumph for social and political stasis. The insistence by the main unionist and nationalist parties to live apart also solidified cultural apartheid, smothering the transformative potential of the labour movement, which was side-lined by the onset of sectarian armed conflict in the 1970s. The post-war Northern Ireland state was a political entity that failed both working class Protestants and Catholics.

Even though much of the discriminatory policies had been removed by the British government when it introduced direct rule in 1972, the genie was already out of the bottle. Loyalist and republican paramilitary death squads unleashed their violent campaigns of assassination and put down firm roots in working class communities.

Society, meanwhile, became much more securitised and the presence of over 20,000 British soldiers and police officers on the streets, huge military installations dominating the landscape, and vehicle checkpoints all gave Northern Ireland an international reputation as a militarised society.

However, there was at least some semblance of democracy. Elections were held regularly and the security forces were obligated to operate according to the rule of law, even if, on occasion, human rights norms were contravened by lapses into a disproportionate use of force. In any event, by the late 1970s the security forces were firmly subordinated and accountable to a civilian-led, liberal democratic government based in London. But the conflict persisted and, as we now know,claimed the lives of almost 4,000 people, with ten times as many injured.

It was the Good Friday Agreement of 1998 that recognised how the ‘tragedies of the past have left a deep and profoundly regrettable legacy of suffering’, but beyond recommending honouring those who died or were injured – and their families – with a fresh start, the practicalities of how to ‘deal with the past’ were left on the back burner. The legacy of violent conflict has been allowed to fester, with the direct consequence of slowly eroding trust between the parties in conflict, to say nothing of the huge political gains that have been made for the benefit of all sections of society.

Unfortunately, we know only too well that today’s political parties have continued to use and abuse the past in a perverse game of one-upmanship.

This is unfortunate, though hardly surprising.

In what political scientists call a ‘dual-party ethnic system’, local politics continue to reflect the nature of the society in which they are practised. The fusion of ethnicity, religion, culture and national identity make this conflict deeply debilitating.

However, this does not have to dictate all aspects of life.

As Chile has shown, there is an alternative way to reconcile our inability to change the past with our pressing need to learn from it.

In considering how to do this practically we might look to another Nobel Prizewinning writer, Alexander Solzhenitsyn, for guidance. As Russia’s quintessential advocate of human rights and an irrepressible critic of the Soviet Union, Solzhenitsyn posed the following conundrum in his prose poem We Will Never Die: ‘If you stop and think about the dead, who is to build the new world? In three wars we have lost so many husbands, sons and lovers – yet to think of them repels us. They’re dead, buried under painted wooden posts – why should they interfere with our lives? Forwe will never die!’

The import of Solzhenitsyn’s observation is obvious.

After all, was it not the promise of the 1998 Agreement that we would make the transition towards a civic vision for Northern Ireland?

Having worked shoulder-to-shoulder with people from all communities who are tirelessly committed to facilitating positive, transformative, change I know that this is a challenge that we can rise to as a society.

The Agreement and the recent talks provide a blueprint for the building of a shared future, but the political maturity and will to succeed must be there before embarking on this difficult task.

Until we allow ourselves to accept the fundamental principle that the ‘troubles’ must never be allowed to happen again, Northern Ireland will continue to mark time in the homeland of the dead.