You are at:Home»News & Current Affairs»Opinion»The Truth of a False Dawn
Social share: 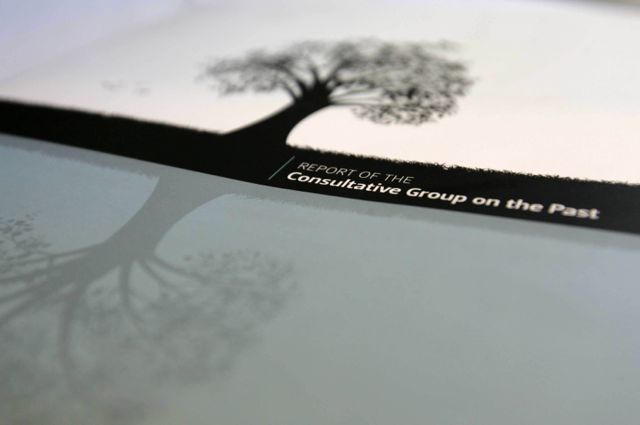 As the Hass Circus gains momentum leading up to Christmas the politicians, Peace Building Industry, Facebook Warriors and Phone in Show Neanderthals jump around the ring performing their well-rehearsed repetitive acts.

Nineteen years after the Ceasefires, 15 years after the Belfast Agreement it has finally dawned on some people that we needed to deal with the past. That is where it becomes difficult and especially in the current atmosphere impossible.

The politicians shuffle about looking forward to 2014 with nothing on their minds except the New Year elections and their coveted seats in Councils, Stormont and Westminster. They will go to the electorate worried only about what percentage of the vote their party’s will get and not in what state the country is.

The Peace Building Industry and experts will trawl out pieces of other truth recovery programmes from the four corners of the world and they will construct their own academic masterpiece of how we will get to the truth. The Victims Groups are diversely split as to how to deal with the past and these politicians, the peace building industry  and the Hass Talks give them a false dawn that they will somehow see years of a process that will see ex combatants queue up in some “dock” to give the truth, the whole truth and nothing but the truth. No matter how much one may sympathise with their position it is not going to happen. Buzz phrases like “limited” immunity etc . . . are phrases from Fantasy Island.

The Truth! Whose truth is it anyway? Will the Paramilitaries from either side tell the truth? Will security forces, politicians  British and Irish Government’s tell the truth? Will individuals participate in any process that exposes them to prosecution, persecution or even “limited immunity”? I cannot see any former combatants from either side queuing up to take part in any process that leaves them as individuals and their families exposed to persecution or prosecution. Victims themselves have no collective strategy for dealing with the past. They even disagree on who is a victim and who is not thus creating a hierarchy of victimhood. If hanging was still possible some would want people hanged and I can understand that.

I believe that ex-combatants would in many cases contribute to a collective response to victims coming from the RHC, UVF and UDA organisations but with the passage of time, change of leadership, feuds and many past leaders and combatants dead I don’t think there could be a collective response that would satisfy many victims. Therefore the creation of this imaginary ‘Dealing with the Past’ process only deceives victims and creates hope, expectation which will be more painful and hurtful when it falls short of the mark.

What of the future, our children and grandchildren? Are they to be constantly held hostage to a past for which they had no responsibility? Even the remote prospect of an elementary process would involve a decade of recrimination and persecution that would be of no benefit to victims, wider society and certainly not to future generations. In any negotiations it is not what you want but what is achievable.

William 'Plum' Smith is a former Red Hand Commando prisoner. He chaired the 1994 Loyalist ceasefire press conference and is currently writing a book on the life of Loyalists in prison .