You are at:Home»News & Current Affairs»Opinion»Why I wear a poppy – by Alex. Kane
Social share: 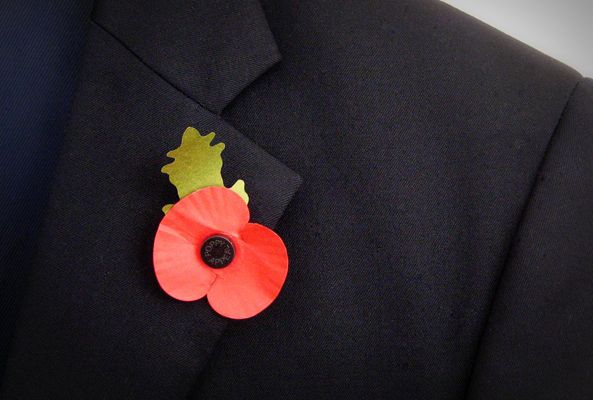 My earliest memory of Remembrance Sunday is of trooping out from Sunday School to stand around the Cenotaph in Armagh and then shivering with cold while very old people, wrapped in black and with what looked like Christmas tree trinkets pinned to their coats, laid red wreaths and wiped reddened eyes. Later, along with my class, I followed those shuffling, snuffling ranks to church and then drifted into my own world as the minister droned on and on and on about ‘sacrifice and the not forgotten.’ I was twelve years old. I was cold. I was bored. What was I supposed to remember?

Five years later, in the autumn of 1972, I began my A Level English course with an introduction to the war poets Wilfred Owen and Siegfried Sassoon and the task of interpreting the line: “What passing-bells for these who die as cattle?”

As part of my research I visited an old peoples’ home to interview two men who had served during the First World War. I have never forgotten that interview. To my surprise neither James nor Sandy (both 78 and friends since childhood) had memories of glory and gung ho to share with me and neither of them wanted to dwell on the reasons which had driven them to volunteer in 1914 rather than wait to be conscripted.

What they wanted to do was remember and name the friends who had not returned home. As they mentioned them—and it was astonishing how fresh their memories of them remained—it was as if they were purging themselves of a sense of guilt about their own survival. These two old soldiers still carried a relentless and ever present grief; a grief, I sensed, which would not be lifted from them until they had rejoined those friends.

I was also surprised by the fact that both men admitted to a sense of shame about having taken the lives, or even injuring Germans and Austrians: “they also had families and children, Alex.” And yes, both of them were very angry that my generation didn’t understand the nature and scale of the sacrifice made by young men and women—on both sides—who had no part to play in starting both wars.

Death is the ultimate leveler. Poets, idealists, patriots, pals, volunteers and conscripts are all victims of this common enemy. The dead win nothing for themselves and share no spoils of victory. The dead, as Sassoon put it, are “face downward, in the sucking mud, wallowed like trodden sand bags loosely filled.”

The dead have no memories to haunt them. There is no glory in being dead and very little glory in escaping with your life when, scarred with nightmare recall and flashback for decades afterwards, the horror never leaves you. Survivors live to learn that sacrifice is often unrewarded, ill-remembered and then squandered when governments adopt new policies to suit new interests.

So yes, I am glad that we have a day of remembrance to honour those who served and still serve their country. I honour those who, out of an uncomplicated but rarely simple sense of patriotism, offered their lives for others. Yet, I do feel a sense of discomfort and hypocrisy when I remember them and honour them. I am a coward. I can imagine nothing more horrible than becoming one of Owen’s ‘cattle.’

I am fifty-eight years old and too old for service or conscription if a war did break out between the United Kingdom and some other country. I am grateful to those who served in the past, and to those who still serve today, that my cowardice was never put to the test and exposed. The wearing of a poppy and a few minutes silent reflection each year seems almost too small a price to pay for that gratitude.

I cannot begin to comprehend the arguments of those who claim that Remembrance Day glorifies war. It reminds us of the loss and horror of war. It reminds us that history occasionally produces madmen with whom it is impossible to have peace. It should remind us that the freedom to criticize the poppy, Remembrance Day and almost anything else we don’t like is a freedom secured for us by the sacrifice of others. The freedom to wear a ribbon or badge in memory of, or in support of a political, social, charitable or moral cause, is a freedom won by those in whose memory we wear the poppy.

But there is another point that too many people seem to forget. The freedom to reject the wearing of the poppy, and the freedom to chastise those who do wear it as glorifiers of war, is exactly the same freedom as that exercised by those of us who do choose to wear the poppy.

In my experience the only people who glorify war are people who have never served in any army, police force or reserve force. The only people who are gung-ho about war are the armchair generals who wage war on terror from the comfort of a Twitter account. Indeed, the people who do the greatest disservice to the poppy and the whole purpose of the poppy are those who use it as a symbol for their own prejudices and hatreds: those who use the sacrifice of 1914-18 and 1939-45 as a way of point-scoring over their political opponents in petty little propaganda squabbles.

I’m not a religious person and I don’t invite God’s blessing ‘upon the fallen.’ I don’t attend a church service or stand at a cenotaph. I do wear a poppy—albeit for only a few hours on Remembrance Day and Remembrance Sunday—but not with any smug and hollow feeling of victory or misunderstood glory. I don’t wear it as a political commentary on my views of Northern Ireland, nor to identify myself with the unionist community.

I wear it because I was given the freedom to wear it, a freedom which has enabled me to enjoy something never taken for granted by my parents, grandparents or great-grandparents, nor by James and Sandy: I haven’t had to go off to war.

“They shall grow not old, as we that are left grow old.” The dead grow old when we forget them and in forgetting those who died for our freedom we can, far too easily, forget the reasons and roots that led to their sacrifices. In forgetting that, we increase the risk of repeating and magnifying the horrors. We should neither forget, nor be allowed to forget.

Back in 1972 Sandy handed me a piece of paper as I left the interview. He had, by his own admission, snipped it from a book a friend had lent him in 1922. It contained these lines from Christina Rossetti:

“Remember me when I am gone away,

Gone far away into the silent land;

When you can no longer hold me by the hand,

Nor I half turn to go yet turning stay.”

I remember and re-read those lines every Remembrance Sunday. And I remember James and Sandy. They are worth a poppy. They will always be worth a poppy. War isn’t just about dates, causes, battles and moments. War is about people.