You are at:Home»News & Current Affairs»Is it possible to wear a poppy and an Easter lily? – Brian John Spencer ponders
Social share: 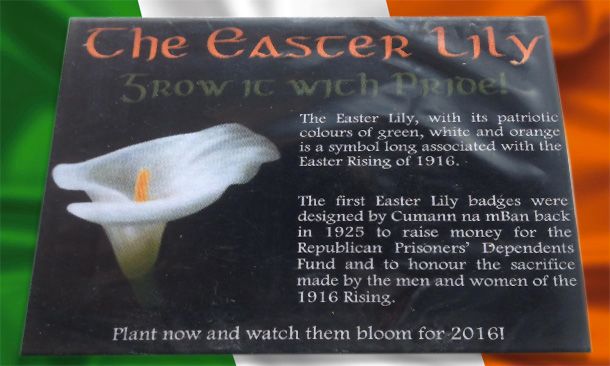 Living in a liberal democracy is about the free movement of ideas and of opinions. Their exchange is the mother of creativity, innovation, technological, political and cultural development.

Yet in Northern Ireland it’s a binary world where minds are guided by two ideas. You’re either green or orange. You’re either catholic or Protestant. To be Irish you have to be implacably not-British. To be British you have to be implacably not-Irish. Absolutism, non-compromise and clinically significant levels of intransigence are a virtue. There’s never a half-way house. It’s vice-versa politics.

This is a distorted political climate; a degeneration of a terrific order. It’s spectacularly stultifying on the people.

The poppy in Northern Ireland is a perfect indicator of the vice-versa politics. As is the Easter Lilly. By their cultural inheritance, unionists and loyalists wear a poppy and lay a wreath. By their birth, Nationalists and republicans don’t. The poppy is a matter of “them and us”. It’s contentious, antagonistic, divisive. Vice-versa the whole experiment for the Easter Lilly.

However these vice-versa traditions are quickly becoming the biggest obstacle to progress in Northern Ireland. As Mick Fealty said, “Absolute binaries are a settled condition of war.” To go forward we need a radical break from the vice-versa vitriol. The symbols can be shared. We need to forego the old binary biases and take up neighbourliness. We need representatives to take the lead. We can mark the other person’s cherished tradition with respect without having to be a fervent supporter.

Firstly, for the Catholic, nationalist and republican it doesn’t have to be a matter of vice-versa vitriol. The choice doesn’t have to be between hating England-and -rejected the poppy or  respecting the poppy-and-being a West-Brit. We need to recognise the cultural history and demographic realities of the island of Ireland. As Michael Kirke said, “The Irish constitute Britain’s biggest ethnic group and vice-versa” and so, as As Fintan O’Toole said, “A new [Irish] identity has to be positive rather than negative. But it also has to find a way to include Britishness.”

We don’t need poppy-wearing conscription, but we do need a de-politicisation, less vice-versa, less antagonism. We can look to the Republic of Ireland for the example. Sinn Fein would have you to believe what they represent what it is to be Irish – acutely allergic to everything British. This is a hideous distortion and untruth, and a hideous effect of the dysfunctional political climate in Northern Ireland.

Sinn Fein style anti-Britishness is not what it is to be Irish. Look to the Republic of Ireland and you will see progressive republican leadership who are very happy and very ready to work with their British neighbours. Taoiseach Enda Kenny laid a wreath in Enniskillen. Tanaiste Eamon Gilmore laid a wreath in Belfast. The President Michael D Higgins led a large Remembrance Day ceremony in Dublin. RTE broadcast a Remembrance service. These are the actions of a modern, non-“ourselves-alone”, courageous and transformative Ireland. 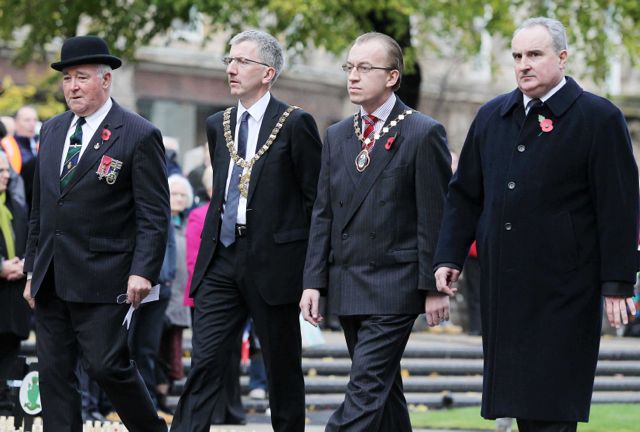 Armistice Day Service at the Cenotaph in the grounds of the City Hall in Belfast. Belfast’s Sinn Fein Lord Mayor Máirtín Ó Muilleoir (second from left) along with the DUP’s Deputy Lord Mayor Christopher Stalford (third from left) make their way through the Garden of Remembrance to the Cenotaph for the short service.

Sinn Fein lord mayor Máirtin Ó Muilleoir paid his respects at the Armistice Day ceremony in Belfast. A historic moment and a massive step forward. However the party of “ourselves alone” and the republican grassroots remain reflexively anti-British. With Sinn Fein being the largest nationalist party in Northern Ireland this is generating a false narrative, and ironically is deepening partition, for the anti-British political climate among republicanism in Northern Ireland is at growing variance with the Republic of Ireland.

The Sinn Fein view of British history as a narrative of genocide, ridicule and repression, whilst understandable, is a hopelessly reactionary position. Like the anti-Columbus movement in America, it cherishes past grievances over future opportunities. Atrocities should be remembered by republicans but they must not be allowed to become the driver and motivator of a political movement.

Secondly, for the unionist who demands respect for the poppy and the remembrance ceremony, it is incumbent upon him or her to reciprocate the generosity when it comes to mainstream Irish commemorations. (The Shankill bomber memorial is an isolated example and outlier that was roundly condemned by people and commentators in the Republic.)

As John McCallister said, we need to open a hand of forbearance and conciliation. Not a resentful, morose, offshore Serbian hand that wants to police the thoughts of those who dare commemorate an event they don’t associate with. As John McCallister said, “As a British citizen, as someone who believes in Northern Ireland’s place in the contemporary United Kingdom I would not describe myself as ‘celebrating’ the Easter Rising. I think it is important, however, that I commemorate it alongside Nationalists, that I recognize the fact that it shaped 20th century Irish history and – in different ways – all our political convictions.”

It cuts both ways – both unionist and nationalist need to forego the old sectarian slogans and need adopt grace and generosity. As John said, “I do think we all have to commemorate these events as helping to define 20th century Ireland and who we are today.” This needs to be the third way that recognises the Irishness and Britishness that exists on the island. We need a reformation in thinking. For this to happen requires action and bravery of political giants who are willing to reach out of their comfort zone and who can set the example for men and women on the streets to follow. As Baron Creeth said, “How our politicians treat each other up in the Assembly and on television directly impacts those in interface areas.”

By continuing to go down the binary path we are ruining, retarding and stultifying our children. So many young people within Northern Ireland have emancipated themselves from the cold mental categories of the Troubles. Yet they are forever beholden to the mood of a vocal minority. If politicians bicker on sectarian lines, civil society will do the same.  If politicians reconciliate along open, shared lines, civil society will come to do the same.