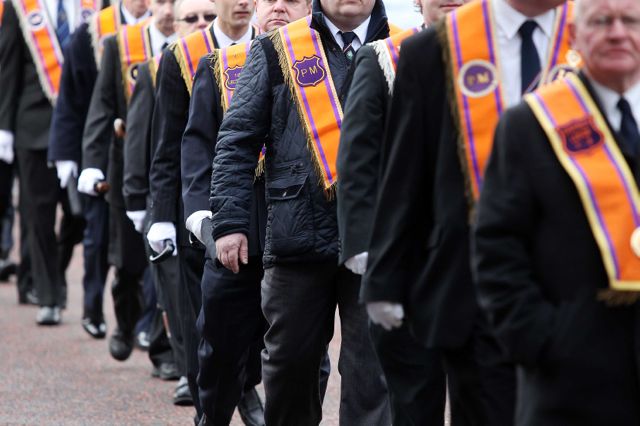 Any debate about whether the parading culture in Northern Ireland is under threat needs to be honest and informed.

Too much of what passes for informed comment is little more than hype or myth.  Not letting the facts get in the way of reason is all too common.

Here are the facts from the last financial year – 2012-2013 – the latest full year.  Almost certainly numbers will increase again next year.

In 2012-2013 just under 4,500 parades took place in Northern Ireland, and of these 2,569 were parades from a Loyal Order/Loyalist/unionist community background.

Of the remaining near 2,000 parades, 175 were from a nationalist/republican background and the rest were other charity or civic events such as Belfast Pride.

That means not just an increase of 3% in the number of Loyal Order/Loyalist parades between last year and this, but a 35% increase in the last 30 years or so.

Is the parading culture under threat?  Clearly, factually, it is not going by the volume.  There have never been more parades.

Is the Parades Commission over-zealous or “draconian” in how it approaches those that are deemed contentious?

Well, just 225 of the total of 4,500 were deemed contentious or sensitive in 2012-2013 including the 51 weekly parades by Portadown District which has the same restriction applied.  Taking that as the same parade and restriction, it would leave 174 contentious parades out of a grand total of just under 4,450.

The Commission considers all of these, gathers evidence and takes on board all submissions before making a judgement.  Of these 174 sensitive parades, around a quarter (24%) have no action taken at all and proceed entirely as notified.  Less than half (40%) have a route restriction applied.  Very often when a route restriction is applied frequent feedback from local paraders suggest it is a restriction now accepted and considered fair and balanced.

Is the Parades Commission over-zealous or draconian?  No, and indeed is all too often criticised for getting less involved than some believe necessary.

The fact is that all of our futures are tied together.  Whether our grandchildren, Protestant or Catholic, resident or those parading, believe their identity and culture is understood and respected will depend on the relationship they have with each other.

And that will depend on what we, in this generation, teach our children to teach theirs.