You are at:Home»News & Current Affairs»The Dissidents are not going to go away – They will grow in number – Alex. Kane predicts
Social share: 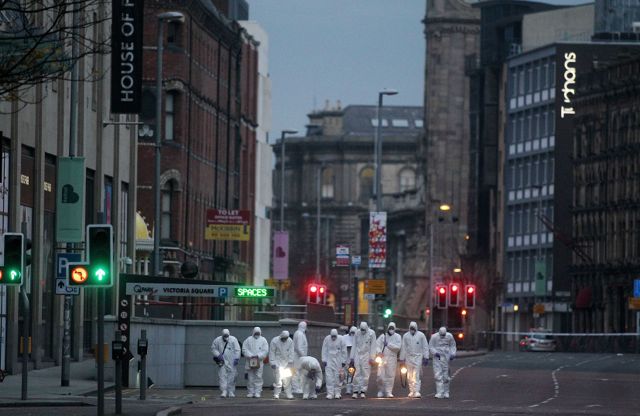 The scene at the top of Chichester Street in Belfast City Centre beside Victoria Square where a car bomb partially exploded on Monday.

Imagine you came from a republican background: a background in which members of your family had been involved with the IRA; been interned, been injured, been killed, spent years on-the-run or constantly looking over their shoulder. Imagine supporting the IRA’s campaign—either as an active ‘volunteer,’ or providing safe houses and alibis, or somewhere to store weapons. Imagine you put your own personal/family life and career on hold while you dedicated yourself to restoring freedom to Ireland.

Then imagine—twenty or thirty years later—that you hear the news that the IRA is being stood down and the weapons decommissioned and that Sinn Fein will be co-governing Northern Ireland with the Ulster Unionist Party or DUP. In other words, imagine yourself in a position in which everything you believed in and worked for had been snatched from you. What would you feel: how would you respond?

Well, the leadership of the IRA and Sinn Fein made the case that politics was the surest way of delivering the ultimate goal of unity. They argued that the ‘armed struggle’ had gone as far as it could and the next phase (and isn’t there always another phase?) would involve winning an electoral majority for unity, wearing unionism down on issues like flags, parades, symbols, identity etc., and building up a significant presence in the Dail. At some point in the near future, so the argument went, Sinn Fein would be in government on both sides of the border and then a majority vote would deliver unity.

As far back as 1997 (indeed as far back as the 1994 ceasefire) there were republicans who didn’t buy into that argument. They didn’t believe that sitting in Stormont with unionists represented anything resembling victory, let alone ‘a cunning plan.’ They viewed it as a betrayal. They saw it as Adams and McGuinness doing in the mid-1990s what they had rejected in 1969. But they remained a minority within republicanism, such was the grip that Adams/McGuinness had over the political and armed factions. And Adams was also able to argue that the meltdown of the UUP and further divisions within unionism would enable Sinn Fein to leapfrog to the top of the political/electoral pile. Those who dissented from that view—the republican dissidents—seemed to be on the wrong side of the argument and the wrong side of history.

But it didn’t work out like that. Unionism has rallied around the DUP, allowing it to maintain a comfortable lead over Sinn Fein. Martin McGuinness has had to serve as deputy First Minister (and don’t underestimate the psychological significance of that word ‘deputy’) to Paisley and now Robinson. Opinion poll after opinion poll indicates that support for a united Ireland is falling rather than rising among small-n nationalism. There is no appetite south of the border for unity anytime soon. Yes, Sinn Fein may be able to nibble at the heels of unionism/loyalism on some issues, but the Union itself looks stronger than ever. Put bluntly, a united Ireland looks no more likely now than it did in August 1994, or July 1997, or April 1998, or March 2007.

All of which explains why those dissenting from the Adams analysis are growing in number and now seem determined to make the case for a return to the tactics of the ‘armed struggle.’ And it poses a very real problem for Sinn Fein, who are not capable of pointing to much in the way of progress and so have to revert to a strategy which is best summed up as a ‘greatest hits tour’ in which martyrs, prison escapes, key events and ‘victories’ have to be celebrated on an almost weekly basis. And if it annoys the hell out of the unionists, then so much the better.

The dissidents are not going to go away. They will grow in number. They will become bolder. They reckon that any attempt by the PSNI or ‘Brits’ to crush them will win them support—precisely as it did when the Provisionals broke away in 1969. They reckon that anything resembling Sinn Fein’s dismissing or disowning them will damage Sinn Fein. And they probably know that there are former IRA members not at all happy with the way things have gone since 1998. They may not have huge numbers, or an arsenal worth speaking of, but they also know that they don’t need that at this point.

So it would be very stupid to write them off or pretend that they are incapable of serious traction. They have been rustling in the undergrowth for almost twenty years; and in that time they will have been preparing, recruiting, listening and planning. At this point it seems unlikely that they could mount, let alone sustain a major terrorist campaign; but at this point a decade ago—or even five years ago—did anyone think we’d be facing car bombs in Belfast, or spot check security patrols, or car boots being searched at CastleCourt again?

Dissident republicanism needs to be dealt with. (And before someone starts a predictable outburst of whataboutery, yes, I do know that there are problems with loyalist paramilitarism too—the subject of another essay). And it needs to be dealt with by everyone. But, as Michael Copeland MLA noted in the Assembly a few days ago, our response has to be something more than the usual platitudes. I mean, let’s be honest, what is the point of politicians telling us that they won’t allow us to be ‘dragged back to the past,’ when their own body language and rhetoric suggests that they have never actually left that past?

Also, the usual tactics of intelligence, infiltration, disruption, arrest and imprisonment won’t necessarily work either. It takes a long time to wage that sort of strategy: and even longer when you realise that the intelligence services (many of whose own people are relatively new to the game) don’t yet have tabs on many of the latest generation of armed republicans. It’s worth bearing in mind, too, that those sorts of tactics can just as easily result in an increase of terrorist numbers.

The other element is very clear evidence that the government of Northern Ireland is working for the benefit of everyone. That’s going to mean the DUP and Sinn Fein putting aside the mutual vetoes, petitions-of-concern, hostile language, finger-pointing, score-settling, looking-after-your-own approach to government and replacing it with genuine consensus and cooperation.

It’s going to mean all of the Executive parties agreeing on a proper, costed, joined-up Programme for Government, which has a clear agenda and vision for the future. It’s going to require them to be able to prove to the world that they can work together, by choice and for the good of all. The best way, the very best way of knocking back the dissident elements on both sides of the fence is the evidence that there is stable government and good government here: government that is relevant, government that makes a real and positive difference to the lives of everybody, irrespective of where they come from. A government, in other words, which has made the transition from conflict stalemate to conflict solution.

It all sounds far too simple, doesn’t it? Far too idealistic. Far too unlikely to work. But maybe, just maybe, if we focused on the simple, the idealistic and the unlikely we could end up surprising ourselves!

Social share:
Previous ArticleHas Attorney General’s plan for dealing with the past come too soon? – asks Professor John Brewer
Next Article Can it be right to do what seems to be the wrong thing in addressing the ‘past?’ asks Terry Wright