You are at:Home»News & Current Affairs»Another wall of shame in Belfast
Social share: 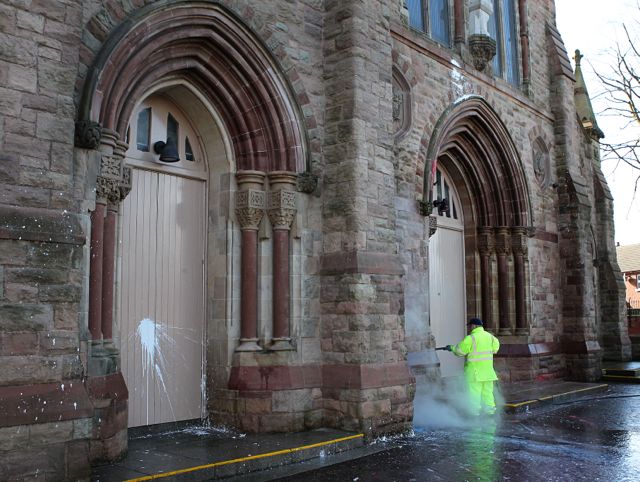 As Northern Irelands year of discontent draws to a sombre close, we awoke to the news last Friday that the Department of Justice had requisitioned land from St Matthew’s Church on the Lower Newtownards Road to construct a Peace Fence. Interestingly, the Minister for Justice stressed that this was not a new peace wall, but instead “a fence made of wire netting designed to be retractable when not needed”. However, let’s call a spade a spade, whether we refer to them as ‘security barriers’, ‘interface walls’, or ‘peace walls’, they all serve the same purpose. That is they have been constructed, because residents have either experienced or perceive there to be a threat of violence from the ‘other’ community. In other words, physical separation is considered an appropriate and tangible government response to addressing people’s fears.

The decision is an indictment of our peace and political processes. In 2013 Stormont still feels that it is appropriate to construct a physical barrier in response to violence, disorder and intimidation. The fact that the peace fence is being constructed is not a criticism of those communities adjacent to it, for the protection of residents and their homes is of paramount importance. Nor is it attributing blame at the door of the DOJ, who have been consistent in their support for communities attempting to transform their areas. Instead, it is evidence of the failure of our devolved administration’s ability to create the conditions in which communities can build a shared and cohesive future. The realities are that this Stormont, has learned little from the one in 1969, where responses to sectarian violence and public disorder are still characterised by division and separation.

In 1969 the Stormont government in conjunction with the British Army took the decision to construct temporary security barriers and fences as a response to the sectarian violence and disorder. These temporary structures were not initially referred to as ‘peace walls’ but were considered lines that demarcated territory and provided people with a sense of security. In 1971 a Working Group on Parades and Processions, consisting of senior politicians, military representatives and civil servants, conducted a review of the ‘peace lines’ in Belfast. The group knew the risks it was running from the beginning:

“It is an ugly thing, its continued existence creates an atmosphere of abnormality which is psychologically damaging. It emphasises and institutionalises division…and it can too readily become a crutch for the community with the abnormal becoming normal, and the search for solutions set aside for another day…we must assert that no community can continue to rely indefinitely on such methods” (1971).

There was an acknowledgement that a policy of physical separation was damaging to the long-term aspirations of community stability and that another method of addressing community concerns had to be found. However, the Working Group concluded that in the immediate months and years it would be necessary to facilitate rather than discourage segregation through city planning and the design of buildings because of the nature of the violence and the levels of mistrust that existed within communities.

Not everyone agreed with the proposals for barriers:

“When a city is redeveloped a pattern of life is laid down for at least a century…I find myself in disagreement on the proposals that the divisions in the community should be accepted as a feature of life for a hundred years or more. This seems a counsel of despair. A despair, which it is proposed, should be expressed in terms of bricks and mortar” (1971)

The exchange ended with a civil servant articulating the view that the peace walls themselves may become sources of community discontent and indicated that in the future those communities that reside adjacent to the peace walls could become referred to as ghetto’s by the wider public.

This brief journey into the past, illustrates the thinking and language that was dominant at the beginning of the Conflict. The reality is that abnormal has become normal and for many, physical segregation has become a rationale and legitimate response to violence and disorder. Forty-two years later, our own government, and we as a society, have been unable to move beyond this logic and provide alternatives to a physical barrier. 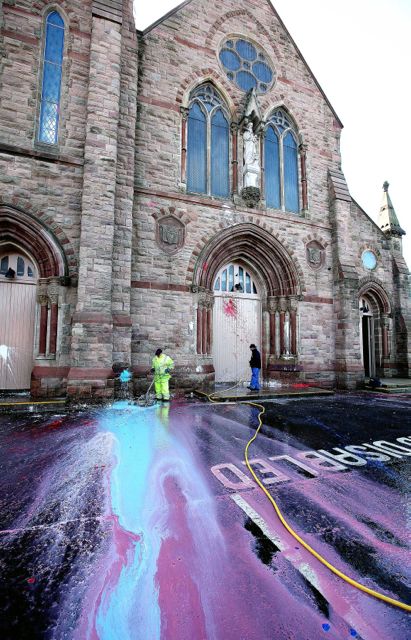 What are the wider implications of the decision to construct a new peace fence in a city that has over eighty such structures? Firstly, local and international funders may begin to question their relevance and role in continuing to fund and resource communities and organisations that are trying to remove these forms of conflict architecture. Secondly, it seems to me that the Together Building a United Community’ document, which is the NI Executives road map to a shared, cohesive and united community has failed at its first hurdle. This new construction is the antithesis of the Executive’s vision, and therefore throws into doubt their commitment to removing all of the structures by 2023. Thirdly, it stifles local community momentum around attempts to transform and ultimately remove their own peace walls. On the one hand, they are being told that society has moved on from conflict, and government is in problem solving mode, while on the other, they see the NI Executive dust down pre-conflict policies, which only serve to remind them that they are still vulnerable, under threat and susceptible to sectarian violence.

In drawing to a conclusion, we all need to heed Michael Copeland’s warning that  ‘high ground moralising should not take precedence over the fears of local people’, but there comes a time when physical barriers should not be a legitimate response to violence or the threat of violence. Northern Ireland is often lauded as a model of good practice in peace building. So fifteen years into such a process and after many millions of pounds later what have we to offer the international peace building community in terms of lessons, tools and practice? Whatever the success in terms of stable government, community tensions still require intervention in the form of a retractable net.