You are at:Home»News & Current Affairs»Opinion»Can progressive politics flourish with its star hitched to Orangeism? – by Seán Byers and Connal Parr
Social share: 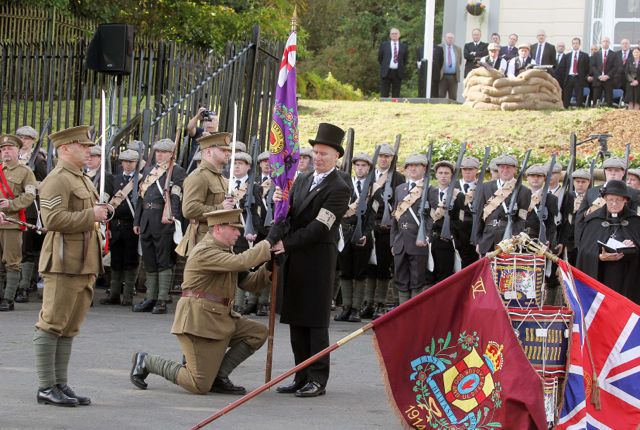 One of the abiding images from the past year is that of PUP leader Billy Hutchinson dressed as Edward Carson, the Dublin-born barrister, anti-socialist and friend-cum-foe of Oscar Wilde. Hutchinson played the role of Carson at the Ulster Covenant commemoration last September and once again at the recent Ulster Day march held to mark the centenary of the UVF’s formation. The gesture is literally reflective of the reactive (and reactionary) alliance of the Unionist classes into which progressive loyalism has occasionally fallen.

Recent studies of loyalism – for example, Tony Novosel’s excellent Northern Ireland’s Lost Opportunity: The Frustrated Promise of Political Loyalism – have sought to challenge simplistic portrayals of working class Unionist politics, highlighting the series of attempts by loyalist thinkers such as John McMichael, Glenn Barr, Gusty Spence and his Long Kesh disciples to bring an end to violence and advance a broadly leftist political programme. This built on the contribution of Aaron Edwards, who re-established the Protestant working class’s Labour credentials and drew a line between the Progressive Unionist Party and the old Northern Ireland Labour Party (NILP), right down to their overlapping membership and constituencies.

Yet, while the caricature of loyalism has largely been dispelled, recent events have led to its reaffirmation. Most remarkably of all Hutchinson himself could easily be included among those who at one time advanced an independent vision. During the negotiations which led to the Good Friday Agreement, he informed Fianna Fáil’s David Andrews that there were ‘damn all’ Orangemen sitting on the PUP/UDP side of the table after the Minister for Foreign Affairs announced the Irish government had secured funding for a heritage park on the site of the Boyne. Back in a 1995 interview with Feargal Cochrane he spoke of how he was loyal only to his class and that ‘for me, it’s not about being a Protestant and it’s not about being an Orangeman…pure and simple Unionism is about the link with Britain’. However, recent political exigencies appear to have occasioned a change in tack by Hutchinson and the other present day leaders of loyalism. 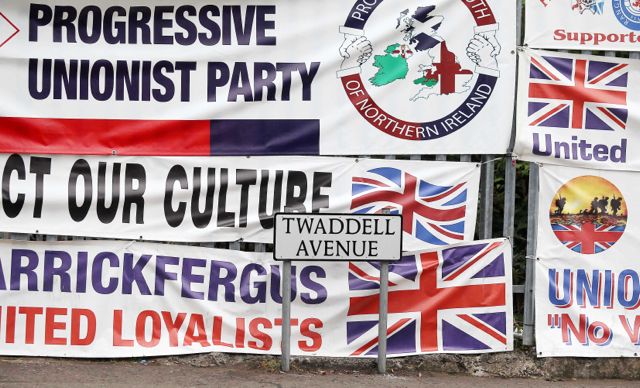 Now that the centre of protest has moved from flags and Belfast City Hall to parading and the Twaddell Avenue ‘civil rights’ camp, it is important to appraise critically this particular alignment of loyalism with the DUP, UUP and the Orange Order, which W.D. Allen MP described in 1925 as ‘a remarkable feudal, patriarchal, tribal, historical anachronism in these days of moderation, toleration … [and]enlightenment’. For the two main Unionist parties the all-class alliance helped to distract from their historic failings in government. The most serious of these within Unionism always centred on the suggestion that the Protestant working class was in any way ‘privileged’ under the old Stormont regime. As Glen Barr said during an interview with one of the authors, whereas Catholics could always highlight the iniquities of the state, ‘We suffered our poverty in silence’. For both the PUP and the UPRG, both of which have haemorrhaged support since 1998, there is logic to the resuscitation of the cross-class bloc: populism offers the chance to recruit, the two parties make ensuing electoral gains, and are then able to proceed from a position of strength in carving out an alternative path for their constituencies.

By pandering to the lowest common denominator, however, loyalist leaders risk subordinating questions of power and class relations to a generic tribal formula. Brian Spencer has delivered a robust – though occasionally oversimplified – liberal critique of Unionism in its Ulster variant as ‘unBritish’ in its deeds and words (here and here). To its credit the PUP has overruled criticisms from religious fundamentalists to take up liberal positions on issues such as gay rights and abortion, reflecting popular opinion more closely than the two main Unionist parties and the Protestant Coalition. The pressing questions of health, housing, integrated education and unemployment are, in the words of one PUP activist, ‘addressed on a daily basis’ in the community. Speaking to the Irish News in the lead up to the PUP annual conference this weekend, Hutchinson reiterated his commitment to a left-leaning programme. Unlike Stormont’s happily inert duopoly he is opposed to a reduction in the rate of corporation tax – which he has quite correctly outlined will benefit only the well-educated and those in ‘higher end jobs’ – while the PUP leader has also criticised the DUP and Sinn Féin for supporting the introduction of Public Private Partnerships. These positions contrast sharply with the language employed by the five parties of government, all of which are ideologically committed to a process of neoliberal peacebuilding.

In the broader context of economic austerity and falling living standards, the picture is one of progressive loyalism now sitting in isolation from the British and Irish labour movements. Compared to the enthusiasm with which Unionist/Orange commemorations are greeted, events marking the labour struggles such as the 1907 dock strikes, the 1913 Lockout and the 1932 outdoor relief strikes have generated little or no interest in loyalist circles. The PUP and UPRG seemed conspicuous by their absence from May Day celebrations, though an incident on the day when Éirígí activists hijacked proceedings to display their banner alongside those of trade unions illustrates that traditional mistakes by all sides damages the prospect of progressive Unionism. Hutchinson rather unfortunately justified his party’s non-participation in the ICTU ‘Another World is Possible’ march against the policies of the G8 on the basis of its ‘anti-British’ content. Thus it can safely be argued that the leaders of progressive loyalism are less willing to encourage people to take to the streets in opposition to the dismantling of the NHS and welfare state – institutions lauded by the veteran socialist republican Tommy McKearney as achievements of the British state – than in support of the ‘right’ to march through a predominantly Catholic working class district. A class alliance appears to have been rejected, though the planned introduction of Iain Duncan Smith’s welfare reforms to Northern Ireland presents another opportunity for loyalist parties to contribute to an oppositional united front of the labour movement and progressives.

Writing in 1980, Austen Morgan – no friend of republicanism – acknowledged the organic, bottom-up character of the 1974 Ulster Workers’ Council strike while at the same time delivering an important warning: ‘To hail it as a proletarian upsurge is to prettify sotto voce Protestant public house politics, to appropriate the language of socialism for an all too virulent loyalism.’ The same analysis could be applied to the flag protests and the Twaddell Avenue ‘civil rights’ camp, which are working class at the base yet are spearheaded by the dominant, traditional voices of Unionism. 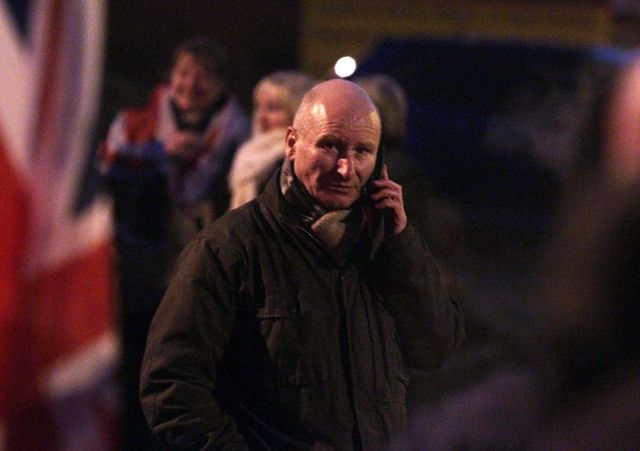 This weekend the PUP will set out in broad terms the programme upon which it will seek to add to its tally of just two elected representatives (both to be found on Belfast City Council). Hutchinson has indicated that the party will continue to look in the direction of the British Labour Party for ideological inspiration, though – unlike that party – the PUP actually retains its ‘Clause IV’ commitment to nationalisation. In this respect, it is important for working class politics that the PUP continues to remain on the scene. But Hutchinson should be wary of the limits of Orangeism and, as he has always insisted he will, find a way of rediscovering the party’s compelling NILP heritage. Tribal politics in Northern Ireland are resilient. However, much like Hibernianism, Orangeism and progressive politics will always make incompatible bedfellows.

Seán Byers received his PhD from the University of Ulster in 2012. His research interests include Irish labour, republican and international socialist history and politics. Presently, he is conducting research on the role of Republican Youth in post-conflict Northern Ireland and is writing a political biography of Seán Murray (1898-1961), the prominent Irish republican and communist. Connal Parr has completed a PhD on Protestant working class politics and culture at Queen's University Belfast. He serves on the board of the Etcetera theatre group and has published articles in the News Letter, Dublin Review of Books and the detail.