You are at:Home»News & Current Affairs»Standing up to the Loyalist ‘Shutdown’ – by Brian John Spencer
Social share: 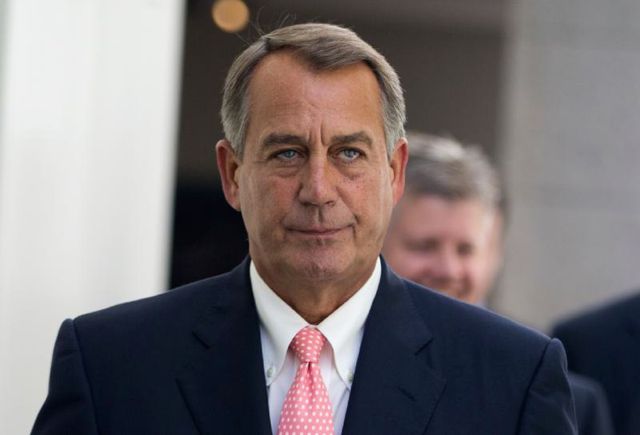 After the Romney defeat in 2012 you thought the GOP would start to exhibit a little modesty and even move towards pragmatic sausage-making. No. To the contrary, the current Republican Party has shown itself ready and prepared to destroy both the US government and the global economy in order to get what it wants – The repeal and liquidation of the Affordable Care Act (Obama’s healthcare law which has gained Congressional and Supreme Court approval).

In response to this fathomless sense of exceptionalism and entitlement and the associated shutdown in Washington, conservative blogger Andrew Sullivan said this: “How does one party that has lost two presidential elections and a Supreme Court case – as well as two Senate elections – think it has the right to shut down the entire government and destroy the full faith and credit of the United States Treasury to get its way on universal healthcare now?”

The parallels with Northern Ireland are stark (as is the irony of an American coming to fix our impasse). It isn’t only in the US where a mad minority is extorting and blackmailing a majority, but also here in Northern Ireland.

With that I ask: How does one demographic section of Northern Ireland that has made no positive attempt to modernise, contribute or transform society, public policy or social relations think it has the right to log-jam government and defame the good name of Northern Ireland in an attempt to get its way on flags and parading?

Just like the GOP, protagonists of loyalism are holding normal Northern Ireland hostage by crying (just like the GOP) “Give us everything we want or else we’ll destroy the country!”

There’s another parallel. The GOP shutdown isn’t just about ending Obamacare, but also about nullifying Obama’s presidency – at times being portrayed variably as an Islamic atheist, Kenyan socialist holed up in The White House.

The  loyalist shutdown isn’t just about getting the flag back up and getting up Ardoyne, but about nullifying the legitimacy of democratically legitimate politics, politicians and the peace process. 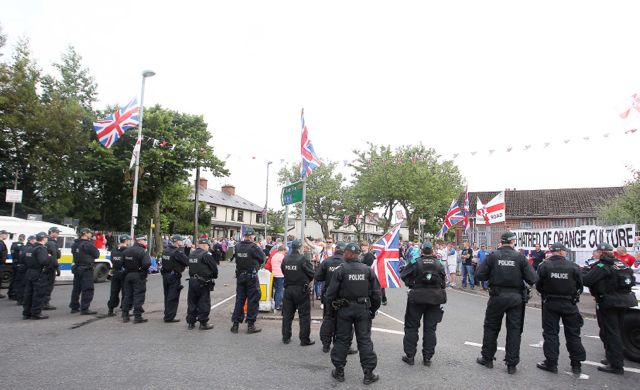 Orangemen parade up to police lines on Twaddell Avenue

In the face of these parallels Northern Ireland can take lessons from the US commentators on how to respond to political vandalism.

One, we cannot capitulate to the manic demands of the most extreme. Like the GOP, loyalism has decided that the rules are for dummies and for suckers, and since they’ve suffered a very minor restriction by playing by the rules of the game they’ll smash up the board game.

How do you deal with this kind of overwhelming solipsism that sees an opposing view as illegitimate? Democratic decision-making as irrelevant? Compromise as a weakness?

Obama, the normally nice guy, has taken a no-nonsense approach and has placed the fault firmly at the feet of the GOP. For conservative blogger Andrew Sullivan it’s simple: You can’t cohabit with forces that have absolute contempt for due process and democracy. “This time, the elephant must go down. And if possible, it must be so wounded it does not get up for a long time to come.”

Likewise, mainstream unionism needs to stand up and push back against the forces of irrationality. You can’t entertain abject and wanton violence, otherwise you stand as an apologist for the brutality.

Two, we need to say things as they are. The cult of silence and soft-touch liberal non-criticism must end. As the editor of The American Conservative Rod Dreher asked of the GOP, “What kind of world do these people live in?” So we must ask the same question.

Just as America needs to save conservatism from its adherents, so we need to do the same. Andrew Sullivan made it clear that the stance of the GOP “is emphatically not conservative. Conservatives try to reserve constitutional order; today’s Republicans seek to destroy all such restraints and any form of moderation.”

Theresa Villiers made the same criticism at the Conservative Conference in Manchester. “The idea that British identity can be defended by wrapping yourself in a union flag and attacking police is grotesque.”

The Ulster loyalist has been revealed as the purest form of anti-British political vandal. Those who take this informed viewpoint, and there are many, must stand up and say so.

Three, having taken the decision that we cannot co-exist with a force that is committed to one, subverting democracy, and two, inverting reality, Northern Ireland needs to show real transformative leadership. As Newton Emerson said, we need to show loyalism that the world has not ended, but has changed.

The failure of Mitt Romney taught the GOP and all of Western politics one massive lesson: that the GOP must change. As Bush speech writer David Frum said, the GOP had become isolated and estranged from modern America. No longer could it be the party for white Anglo-Saxon Protestant middle-class men.

The recent failings on the part loyalism have taught the world one massive lesson: that loyalism must change. Contrary to loyalist-opinion there is no special branch of ethics known as loyalist exceptionalism. Loyalism has isolated and estranged itself from mainstream society, Protestant and Catholic. They are not exempt from the law of change. They like the GOP need a time for self-analysis and self-reflection.

Social share:
America Ardoyne GOP Loyalist Northern Ireland Obama republican The White House Washington
Previous Article“I hope I am wrong but I suspect that the Assembly could collapse” – by Danny Morrison
Next Article Can progressive politics flourish with its star hitched to Orangeism? – by Seán Byers and Connal Parr