You are at:Home»News & Current Affairs»How remembering can replay the hurt
Social share: 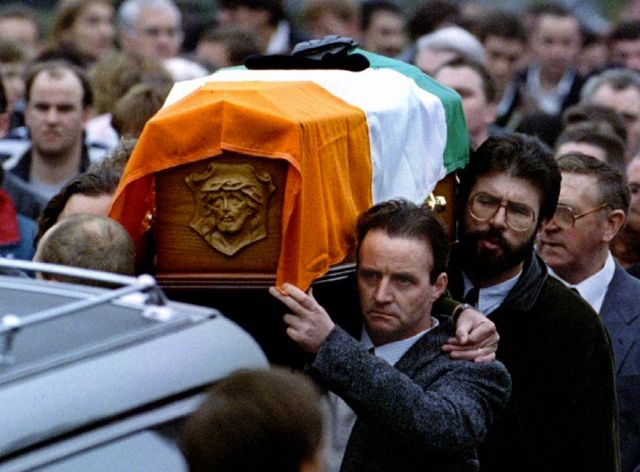 There are words we hear in life that never leave us – stored in that remembering part of us that never forgets.

It could be the loyalist describing the nightmare of “sleeping with the victims”. In other words not being able to sleep with his conscience.

It could be sitting in a car with the IRA leadership spokesman ‘P O’Neill’ as he read a list of the so-called disappeared; the names of those executed and secretly buried by the republican organisation.

That list was read as part of a sequence of events in which the IRA leadership said it believed it had established “the whereabouts of the graves of nine people”.

Since that meeting in March 1999, the list has been added to.

The remains of some of those disappeared have been found, but others have not.

Then there are the words spoken by a police officer about 15 months after the Shankill bomb, an interview in which he described the horror of that day in October 1993.

Wanted to, but had to continue the search.

Ten people were dead, the youngest aged just seven, and among those killed was one of the bombers Thomas Begley.

Outside his family and local community, none of us knew him, but that day – the bomb and the body count – have come together to make him one of the bogeymen of this place and its different wars.

Yet the story of the Shankill bomb is much bigger than Thomas Begley.

Who planned the attack?

Who calculated that a bomb could be carried into a fish shop that day to target an office up above used by loyalists?

Who decided what would be an acceptable number of civilian deaths in a bigger plan to try to kill members of the UDA including Johnny Adair?

Who sent Begley and others out on that mission?

There was no one in the offices up above, and that bomb slaughtered civilians – men, women and children – on the Shankill Road that Saturday afternoon.

Thomas Begley’s name will always be associated with that action and, twenty years later, a planned commemoration to remember him within Ardoyne in north Belfast has become the next controversy linked to the past, the next thing to trip up the present.

It is a war not yet forgotten playing into a peace not yet complete and it is that battle between what and whom should be remembered, or forgotten or ignored.

On his album ‘End of the War’, Belfast singer/songwriter Joby Fox aptly juxtaposes the words “remembering and triumphalist,” and his wordplay defines and describes today’s fight.

He told me his album track ‘Republican and Loyalist’ (above) was inspired by the late Gordon Wilson and the words he spoke after losing his daughter Marie in the Enniskillen bomb.

Fox sings: “I heard your stricken father say he’d pray for those who’d done this to us all.”

The past, who died, how they died and how they are remembered and commemorated is becoming a battleground in the peace.

Recently it was Castlederg. Now it is Begley.

The loyalist Brian Robinson – remembered in an annual parade – has become part of the argument and, in this atmosphere, it will soon be someone or something else.

It happens because we are still arguing over the past, how to describe what happened, who is a victim, who is not, who deserves remembrance and who doesn’t.

In the debris and destruction and death of a decades-long conflict, we will not find one narrative or description or truth, but we need to find a different way.

Recently, the Sinn Fein Chair Declan Kearney described the challenge – commemoration on the basis of dignity, mutual respect and not giving offence.

It is a challenge for all the sides in war and not just republicans, and it is part of an incomplete and unfinished peace.

What happened here cannot not just be blamed and left with those who went to jail, cannot just be dumped on the republican and loyalist communities.

Such a narrow examination of context leaves too many with an escape route.

In the current battles, we forget how much has changed,  how much is different and better.

What was it once like? Just turn the pages back 20 years.

Between October 21 and October 30 1993, including those who died on the Shankill and at Greysteel, 25 people lost their lives.

The wars are over, but not forgotten.

On this website, not long ago, I asked a question: Can we have quiet remembering without the parade?

I asked for this reason, that whether intentional or not, some of this commemorating is replaying the hurt and re-traumatising and it is for those reasons that there has to be a better way.