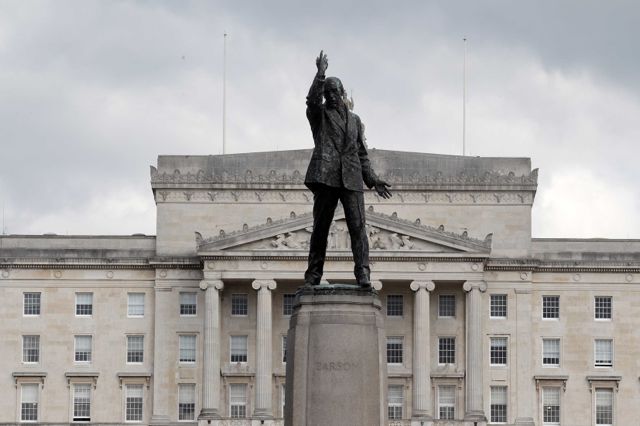 Coup d’état in Western Europe? Unheard of in modern times: unimaginable and surely not possible? Yet there has been a junta established in a part of Western Europe in recent years: a junta, largely unchallenged and unopposed; an undemocratic situation that if it happened elsewhere in the world would attract sanctions and international outcry. But how did they get away with it?

The illusion of democracy is satisfied with the right to vote: but no matter how we vote nothing can change the unholy coalition at Stormont, that in anyone’s terms, is a totalitarian diktat.

In the past we know that the unionist ascendancy relied on the fear factor to secure the working class protestant votes but did little for the working classes. Yet the alternative was an Irish homogenised fascist ideal that did not represent the reality of this part of Ireland. Despite the language of the revolutionary left, still used by republicans, their Irish Nationalist ideal is indistinguishable in character from the National Socialism in the Germany of the 1930s and 40s.

The working class protestant majority voted for the continuation of the protestant ascendancy  like sheep – an ascendancy  that drove the Catholic minority into the arms of Irish Nationalism and worse, violent Irish Nationalism that became a force that the Unionists could no longer ignore. With the rise of Sinn Fein we see an animal farm situation and an unholy alliance where by all-Ireland Sinn Fein help administer ‘British rule’ with the self-serving unionists: each party in the coalition regurgitating the old rhetoric at election time to perpetuate fear in their respective camps thus ensuring votes.

The American Novelist Henry Adams once said, “Politics, as a practice, whatever its professions, has always been the systematic organization of hatreds”. SF and the DUP have been terrifyingly efficient in this regard and is it any wonder?

The DUP were founded on clerical fanaticism and Unionist paranoia: Sinn Fein on nationalistic rhetoric and ideals of yesteryear that helped fuel that Unionist paranoia. Perfect bedfellows. The continuation of SF/DUP power is based on interdependence hence the coup that established the Stormont Soviet as an un-opposable and undemocratic coalition that prevents the emergence of real politics. Insight and independent thinking are the enemy of both in the unholy alliance at Stormont and anything that threatens the Stormont Junta is eradicated. Dissenting voices are gagged: public scrutiny is blocked.

The latest example of which were moves by Stormont ‘special advisors’ to cut facilities time for trade union representatives in the public sector.  The Stormont gestapo failed to demonstrate that the facilities time for trade union work had anything other than a positive influence in government but the attempt to liquidate this vital part of the post-war settlement – the right for people to undertake trade union activities – is chilling and should be noted.

It should also be noted that in this time of massive public sector cuts the Stormont executive special advisers are appointed to advise their particular Ministers without election or interview and are paid up to the 90k each per-annum from the public purse.

The DUP/SF Junta have no answers to these challenges and when pursued will find refuge in the argument that the alternative is a return to conflict. We know this is blatantly not true. Their argument also ignores the emerging reality that we are all Northern Irish. This part of Ireland has been distinct from the southern part for millennia: long before King William, the Reformation, the Black Pigs Dyke or the rehabilitation of the Celtic church by the Catholic Anglo-Norman conquest.

Ireland was only truly unified under British rule, but we now find ourselves in a more natural state of affairs – one necessitated by a border – a border with which most people, South and North, are very comfortable.

While we have much in common with all people in these islands we are a place apart in Northern Ireland but at the same we are a melting pot culturally, politically and  ethnically with a long historic island interplay which creates a unique identity.

Unification with the Irish state is an unnatural state of affairs for this part of Ulster: at least as unnatural, as out of step and dated, as the concept of traditional Britishness of the unionist tradition. According to the recent census only 1/5 of the population of Northern Ireland view themselves as Irish and a sizable portion of what we refer to as Protestants and Catholics view themselves as Northern Irish.

It is time to lance the boil once and for all. The concept of people being ‘Protestant’ or ‘Catholic’ is offensive to many and obsolete. Our Ulster identity, irrespective of perceived religion needs celebrated beyond the antiquated rabble rousing politics so desperately adhered to by the unholy coalition at Stormont. The silent majority are Northern Irish of various shades of left and right, some more Northern than Irish and some more Irish than Northern, but we all need a voice.

The alliance party although well-meaning reinforce the sectarian agenda by seeking the middle ground. There is no middle ground, the whole ground itself is rotten and we need allow the natural development of pastures new.

The various socialist parties again well-meaning speak in antiquated language, offering an idealised solution that only strikes a chord with a very small number of people. Their blinding Marxism refuses to accept culture and identity that exist outside their own leftist political rhetoric. The Greens fear the national identity question and ignore it all together in favour of trendy neo liberal politics.

But should the Greens along with the masses of non-voters and various groupings coalesce perhaps they might confront the affront to democracy that is – the SF/DUP Junta.