You are at:Home»News & Current Affairs»Opinion»“Shouting loudest is not politics” – by Terry Wright
Social share: 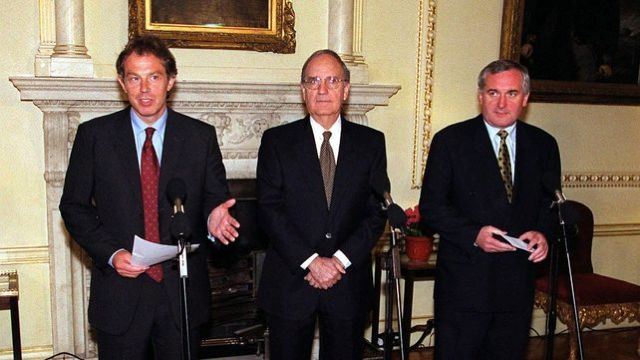 In 1998 political unionism earned an opportunity to build on the leadership it displayed in signing the Belfast Agreement. It has not done so.

The Agreement was undeniably problematic and difficult to reconcile with accepted principles of democracy and personal and public morality but it was born from circumstances where democracy and morality had been compromised and tainted.

Alongside political expediency and absence of ethical leadership and governance within and without, violence, at once political, subversive and sectarian shaped and was shaped by a destructive dynamic that engulfed life at many levels.

The Agreement manufactured and choreographed to set aside difficult decisions and leave issues unresolved in the interests of securing a workable process was bound to prove imperfect and challenging.

In reducing and sustaining a reduction in violence the Agreement, followed by further agreements at St Andrews and Hillsborough can claim some success but in terms of political advance this is not the case.

Unionism above all should display the greatest motivation and focus in making the process work but it is caught up in a swirl of bad politics and seems unable to extricate itself because of the perceived risks that to do so would entail.

Sensitised only to itself, it continues to operate too much within the limiting parameters of self-reference defined by slogans, language and symbols of what it perceives to be its constituency and persists in abandoning, as it has done historically, those wherein it sees no likelihood of support for power and influence. It is seeking both without displaying leadership. In so doing it continues to mirror nationalism and follow a narrow agenda equally out-dated and blinkered.

Trying to succeed by means that contradict the ends is not leadership.

Were this not the case NI politics and politicians would not be held in such low-esteem as that indicated by recent polls and there would not be an ever-increasing number of voters sufficiently inoculated by the sectarian dysfunction as to be immune to its appeal. Buoyed by this immunity they lead a happier and more socially inclusive existence yet their withdrawal from politics cannot be healthy for democracy. Theirs are talents and abilities untapped.

Unionist leaders have hung everything on the wrong nail but within the talks facilitated by Richard Haas an opportunity has presented to address this. Surely it cannot be missed again.

Early signs are not encouraging but leaders have the opportunity to lead the community in looking for meaning in our difficulties and nurture a vision and re-focus on where we could be and challenge as to why we are not getting there.

Leaders can lead the community in taking hold of the crisis and asking of itself if it has contributed to the problems. We must stop the retreat into and irrational glorification of the past. We must go over every issue that might cause division and deal with it. Emphasis should not be on what happened but on what opportunities now face us as a result of what happened. What can be shaken must be shaken for only exposed problems can be solved.

Honesty, alongside the willingness for all to freely accept responsibility to and for the whole of society must be built.

The outworking of the Belfast Agreement has shown that mechanisms and structures will not in themselves guarantee progress if they are not underpinned by ethical social values and a shared spirit of selfless quality assured service and commitment.

Drawing on these lessons and past failings may point to a more successful future.