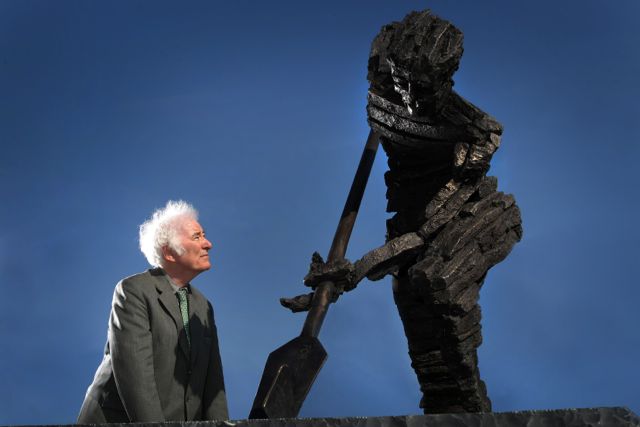 Seamus Heaney, Nobel Laureate and the world’s celebrated poet passed away August 31 2013. He was Irish to the marrow, his passport avowedly green, but he was also a committed internationalist with horizons non-bounded.

On his passing the world burst into commemoration; his face on every publication from the front page of the Irish News to the New York Times. I had the fortune of speaking with Ulster poet Frank Ormsby on the day before his passing and he spoke warmly of Heaney as both a friend and poet. I never met the man but like the many of my generation I shared Ormsby’s deep appreciation for Heaney’s verse.

But as is the habit in Northern Ireland, the passing of an icon has burped up the usual drivel of sectarian and sectional analysis – that feudal, tribal, historical anachronism in these days of moderation and enlightenment that has become so very normal. Men and women constantly digging, cultivating – those old localised, racist, caste grievances.

They tried to make Heaney into a flag. But if we can learn anything from the passing of Heaney it should be the aspiration to move beyond the binary world of Protestant-Catholic, unionist-nationalist or loyalist-republican. As Heaney said himself in a 1997 interview with The Paris Review:

“But listen to what I’m saying! Protestant, Catholic—the point is to fly under or out and beyond those radar systems.”

Yes people will take and make issue with Heaney’s leanings, he was what he was: an autobiographical poet who wrote about his roots and his upbringing – rural, Catholic, nationalist. However this is a tradition as authentically Northern Irish as the protestant and the planter, and to deny or reject the man for his historical stripe is to reject our collective history and scupper the stores of cohesion, mutual interest and respect that we will need going forward.

Seamus Heaney should not be seen as a symbol of division. Heaney was a great one for his even-handedness and he himself saw a shared story that was our collective history and saw our coming future. As he said, “the reader in posterity, is as much for me a Northern Protestant as anything else.” And so Protestants, unionists and loyalists need not reflexively jump, turn and recoil so maniacally.

Borrowing the words of Martin Luther King, whose famous oration was given tribute on the week of Heaney’s passing, our momentous decree of 1998 came as a great beacon light of hope to thousands of people across Northern and Southern Ireland.

Yet, year after year, time after time, everything that should have been eliminated from the national body in those years since continues to gush from the throat, society puking up its undigested sectarianism. We should not allow the feudal few to spoil things for the moderate many.