You are at:Home»News & Current Affairs»Opinion»Leading Republican Sean Murray on what he calls ‘a cycle of coat trailing’
Social share: 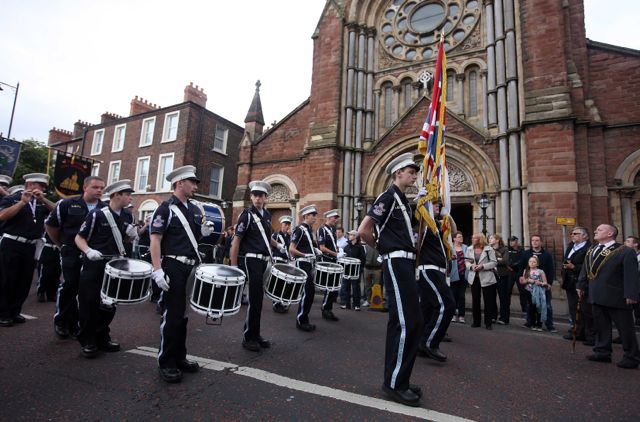 Black Saturday, the last Saturday in August usually heralds the end of the parading season.  However, given the nightly ‘protest’ parades at the Ardoyne interface no end appears in sight this year, as tensions build in this volatile area.

The main Black demonstration for Belfast this year was in the town of Newtownards, a Unionist stronghold in North Down.  The Royal Black Perceptory chapters, members and supporters can gather there and enjoy their day, free from either tension or contention.

Given such a scenario, as we enjoy the last of our summer weekends, one could question the rationale, if one exists, which requires local chapters to insist on walking through or close to volatile interface areas in North and East Belfast, in both outward and return feeder parades to this demonstration.

Chapter No.4 of the R.P.B., who gather in Templemore Avenue, in East Belfast, insist on parading in the opposite direction away from the main demonstration, past St. Matthew’s Church and the Nationalist Short Strand area to Station Street.  Here they board a bus which drives directly to Newtownards, passing St. Matthews Church once more.  The same ritual is played out at the return parade.

Then we have Greencastle R.B.P. 336 taking the scenic route.  Their parade starts at Greencastle Orange Hall, situated in the mainly Nationalist Whitewell area.  It then proceeds to Shore Crescent, where they board a bus to take them to the College of Art in York Street in the centre of Belfast.  Here they disembark and parade up Donegall Street, past St. Patrick’s Church, to the Lower Crumlin Road.  Along with other local chapters, they then parade back down Clifton Street, past Nationalist Carrick Hill area, on past St. Patrick’s Church once more towards Albert Square in the city centre where they board a bus which takes them directly to Newtownards.  If ever a definition of sectarian coat-trailing was required, look no further!

This illustration of cultural expression, necessitates a massive and costly policing operation, while directly heightening community tensions to almost breaking point.  Not content with parading such routes, the chapters ‘contract’ some of the most controversial bands with strong Loyalist paramilitary links to accompany them.  Their behaviour is unacceptably provocative and blatantly sectarian.  They exhibit obvious pleasure in continuing to breach Parade Commission determinations, apparently with impunity.

For the return parade, despite being notified by the PSNI that Mass was being held in St. Patrick’s Church, they insisted on parading past, with the bands playing at full volume, making the priests words inaudible.

These are the actions of an organisation which in its mission statement clearly commits to “regular Christian worship and all aspects of charitable living” and to “enhance greater and higher standards of Justice, Truth, Honesty and Integrity in both private and public life”.

Somehow I doubt if their feeder parades on Black Saturday reflect the noble sentiments outlined in their mission statement.