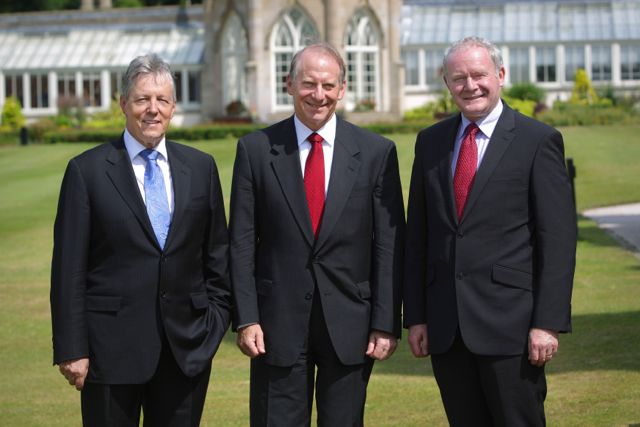 In the waiting for Haass we are watching the crisis build.

We can see it at the political level – in the fallout from the DUP u-turn on the Maze/Long Kesh project.

Then inside the police there are the issues of fatigue, stress and numbers creating an image of an elastic band being stretched close to its snapping point – and then there is the violent street play; seen on the stages where parades and protests clash.

The US Diplomat Richard Haass has been given what many believe is an impossible task; to chair all-party talks seeking agreements on flags, parades and the past.

This is the unfinished business of the peace process – the issues that ask the hardest questions.

In the gap, the police are being left to hold the line. Indeed some would argue too many lines at too high a price.

It is a cop-out at the level of political and community leadership, and there is a mood now being expressed within the police that doing their best is never good enough for some.

“The political and societal inadequacy/vacuum is being spuriously filled by an unfair focus on police,” one senior officer told me.

“We need to get this parades stuff sorted along with the other unfinished business,” he added.

He is right, of course, but Haass doesn’t have a magic wand and his talks won’t work if there is a debating society approach.

As we observe, we see a situation is which leaders are following and followers are leading.

It is a consequence of playing to a mood and a crowd – the story of the tail wagging the dog.

A few days ago, as a response to the new DUP position on the Maze/Long Kesh project, Sinn Fein’s former publicity director Danny Morrison used his twitter account to pose the following question:

“What was that formula in the peace process to which everyone subscribed?

What is happening is making a mockery of joined-up or partnership politics – damaging credibility to put it mildly.

Things are being agreed and then unilaterally disagreed, and in the mess it is the PSNI and the Parades Commission who are carrying the can for that political and community failure.

The senior officer who argues this stuff needs sorted makes sense, but is there the will elsewhere.

Shared space doesn’t mean doing what you want – whether in Castlederg, Belfast or elsewhere; whether Orange or Green.

So Haass needs to produce a take-it-or-leave-it position at the end of the upcoming talks.

It can’t be another of those ‘I want or we want negotiations’, and something else needs to change – leaders need to lead.