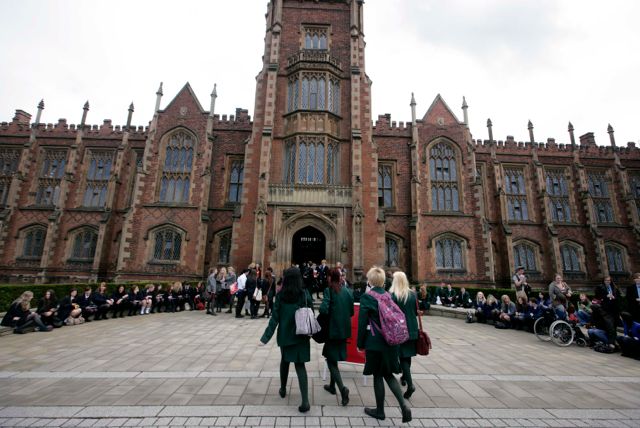 The young people of Northern Ireland are among the ablest, brightest and best in the world. Their kind is what has made Northern Ireland what it really is, an ambitious, tolerant, cosmopolitan country.

Look at the 2013 A-level results, Northern Ireland students performed the best of the home nations. The same can be said of the GCSE students.

In Northern Ireland this summer – while jackboots and fanatics were spilling their sectarian bile on the streets and “chipping away” at our good name for the world to see – just short of 33,000 young people sat A-Level exams. That represents 59% of young adults of A-Level age in the north of Ireland, all of whom have made a conscientious, considered and calculated decision to further and better themselves.

Class of 2013 secured a performance that is historically-typical of Northern Ireland’s young people. If we look back over the last decade, we can see that we have a huge demographic in the hundreds of thousands who are incredibly ambitious and well-educated. This is saying the obvious. But this needs to be said, and said very, very clearly.

For this is the silent, majority demographic who have elevated themselves above the maddening, tear-your-eyes-from-your-sockets tribal politics. An internationalist demographic that is indicative of the normal Northern Ireland.

With that said, we now need to ask: What are the Class of 2013 working towards?

These Young adults have invested time and effort into their future with a very clear purpose in mind. They want to cash-out on their investment. They want an end result. They want a secure and successful future.

But here’s the problem: To build a secure and stable future you need to have strong foundations. A stable, functioning government, a forward looking legislature, effective checks and balances, a strong, outward looking economy, a civil and open society, participatory democracy and a sound social contract.

Northern Ireland doesn’t have any of this. The Class of 2013 faces this inheritance of dysfunction, both political and economic.  What we have is a lumbering Stormont legislature, a sectarian satanic mill full of “nutters”, and indulged fringe communities, outwardly racist, rogue and nationally chauvinist.

The link between the two is explicit. Political parties have exported practice and policy to power-play thugs, fanatics and dysfunctionals. Sacrificing good government and by effect, sacrificing the functional and most capable in society.

And because of this misery much of the recent A-Level optimism is misplaced. The hard reality of Stormont and community dysfunction means that, long-term, the Class of 2013 has little opportunity to cash out on their investment and make a future in Northern Ireland.

And this is the tragedy and tyranny of Northern Ireland’s barbaric, sectarian politics. Many of our 33,000 A-Levels students will now be leaving the country for mainland Britain, Europe, Australia or America, never to return – just as thousands before them have done so. Others will opt to study locally but will be forced to leave as economic migrants. Others tired from the tedium if sectarian politics will leave.

Just consider this comment left on a Guardian editorial on the Maze, made by a student of Queen’s University Belfast. This is the story despair and desperation we hear and see time, after time, after time – our best brightest leaving en masse.

“I’m a student at Queen’s [University Belfast]. When I’m finished with my degree I’m probably going to get the hell out of Northern Ireland. I’m sick of the same old sectarian bullshit arguments peddled over and over again.”

To end this haemorrhaging and cleansing of talent, young people need to face down Northern Ireland’s satanic legislative mill of managed sectarianism and the shower of conspiratorial fanatics that smash up our good name.

Who serves or speaks for the internationalist Hannah Nelson generation? We need something different. We need real economic opportunity. A system that will give an economic end-result to Northern Ireland’s best and brightest. For that to happen we must demand change to the status quo of “Newtonian” politics. As Liam Clarke said, we need a statesman or woman who can bring about a massive shift.

We need new thinking, away from the “idée fixe” of sectional politics and separatist identities. As Brian Rowan said, “we need thinkers to set us free and to save the next generation from our bitterness.” A “going to moon” idea as Eamonn Mallie put it.

But I pose it that we do have the ideas: the young people have shown how to do it. They are truly internationalist, non-contentious, non-aligned people confident in their layered, shared and overlapping identities. They’re the inheritors of the Rosa Luxemburg philosophy that looks beyond strict, set and septic nationalistic notions of identity. And this internationalism is the province-wide consensus, shared by the ambitious and outward-looking Catholic and Protestant young people.

Madness is trying the same thing over and over again and expecting a different result. Our politicians are “nutters” if they think that their same old ideas can give a solution to our problem. The time has come to say that those who created this problem cannot fix it.

Alex Kane and Justine McCarthy have said it too. Only the young people can deliver a functional society because “their (Adams, Robinson et al.) personal baggage is becoming the biggest obstacle on the path to peace.”

Young people need to fight for real economic opportunity, for a shared society and for functioning government. But what happened on the streets this summer is more than just about jobs and economic opportunity, this has become a civilisation question – ‘Northern Ireland is in big trouble.’

And when civilisation meets barbarism either could win; but as Brian Rowan said, “To that question, there is only one answer.”