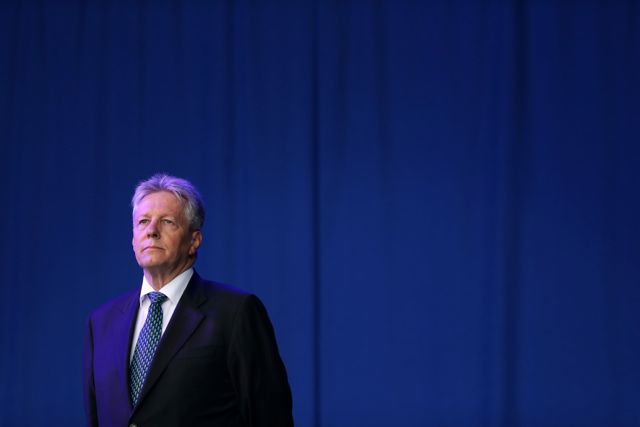 According to Liam Clarke’s article in Saturday’s Belfast Telegraph former Finance Minister Sammy Wilson confirmed Northern Ireland will now lose out on the £18m European fund earmarked for the building of the Peace Center on the Maze Long Kesh site.

Not alone is this Stormont administration losing these monies but what will someone like distinguished architect Daniel Libeskind, hired to design the Maze Peace Center, tell the world about us?

He may well be only one man but he is a very relevant man with immense connections and influence. In the history of architecture a limited number of names ring out down the centuries. Libeskind is one of them.

There are many imponderables surrounding this whole Maze débâcle.

Can we take seriously the DUP claim that the Castlederg Tyrone Volunteers parade was the straw that broke the camel’s back?

Compare this to what went before – the Northern Bank robbery, the killing of Robert McCartney in Belfast city centre and yet the DUP went into government with this same Sinn Féin.

The DUP knew and knows it is not powersharing with the Legion Of Mary.

It is a fact of life Loyalism and Unionism have taken a battering at home and abroad for over a year arising out of street disturbances replete with pounding members of the PSNI in protests whether over parades, flags or whatever.

These activities left Peter Robinson for much of the year acting one day the statesman, and playing footsie the next day with the agents of protest.

Leading Unionist politicians didn’t simply inject bile into their constituencies over the Maze Long Kesh Peace Center in the run up to the controversial Castlederg Tyrone Volunteers Day parade.

These same politicians inside and outside the DUP had worked tirelessly for the past few years to ‘hollow out’ as many aspects attached to the history of the Maze Long Kesh site as possible to ensure the complex would not be a ‘Republican shrine.’

Peter Robinson held the line but eventually caved in internally under the pressure realising his vulnerability in flowing against party opinion.

If my thesis is correct that the damage was done long before the Castlederg parade came into view it still does not excuse the use of emotive language about ‘our patriot dead’ on the radio and television by Republicans.

MLA Gerry Kelly was crass in saying what he said in recent weeks. He cut the feet from under fellow Republican Declan Kearney who has expended so much energy reaching out to Unionism. I heard Catholics and Nationalists react negatively to Kelly’s choice of words.

What is rather baffling is why Martin McGuinness who is perceived to have shown serious leadership as deputy First Minister, didn’t demonstrate more generosity towards the Protestant families in the Castlederg area.

There is an explanation I am sure because as I have often discovered in Republicanism ‘nothing ever is as it seems.’

The fact that more than twenty five members of the security services, killed by the IRA rest in a local graveyard in Castlederg is something which has lingered with me from the day that DUP councillor Thomas Kerrigan made this known to me.

This fact would not have been lost on Martin McGuinness. Why then did he not try to obviate the hurt being visited on the local Protestant community?

Sadly some of the goodwill, which Mr McGuinness had banked in the Unionist community, is now in arrears.

Sammy Wilson has confirmed he left Peter Robinson in no doubt where he stood on the Maze/Long Kesh Peace Center.  Sammy is a wounded minister. He left office involuntarily. He has dramatically upped his profile in recent months. ‘Radio Sammy’ is rapidly replacing ‘Radio Gregory’ on the Nolan Show each morning.

When asked by Stephen Nolan would he want to be party leader Sammy refused to rule himself out as a contender should a vacancy become available. He is remaining in the Assembly obviously with an eye on the big prize. He loved being the Finance Minister and was highly regarded. Westminster is foreign to him. He would forfeit Westminster tomorrow had he been allowed to remain in the Finance chair.

Asked again by Nolan “did you have a stand up row with Peter Robinson over the Maze” Sammy equivocated but left no one in any doubt he stood up to his party leader on this issue. He was even cavalier in dismissing the relevance of any loss of the Peace Center – portraying it as ‘only a small bit” of the overall Maze project.

Spokesperson after spokesperson in the DUP is rallying to their leader Peter Robinson as he is being portrayed as ‘weak’ and ‘diminished’ by political rivals and the media on back of his Maze U turn.

Mr Robinson has shown himself to be capable of serious leadership and writers like myself have underscored this where he demonstrated that leadership over recent years.

The problem for the DUP leader now is that he has exposed a chink in his armour that could be exploited down the road.

There is an argument to be made that Peter Robinson is more secure now than ever inside his party and within the Unionist electorate also, because he has taken aboard what his colleagues have told him about the Maze.

Elections are on the horizon from 2014 onwards. Many DUP insiders argue they couldn’t face the electorate with the Maze fuse burning daily and faced with endless ripostes from Mike Nesbitt and Jim Allister.

Peter Robinson has selfishly used the nuclear option to quell the backlash against him on the Maze Long Kesh controversy and to secure the Unionist electorate’s support. The contrary is where the real danger rests.

This arbitrariness by Mr Robinson is being seen as a serious breach of trust between him and his deputy Martin McGuinness.

Is the Maze project recoverable?

Is the fractured trust recoverable?

Will nationalists now take the Robinson of the Maze Long Kesh U turn seriously?

Where does his Maze decision sit with his November 2011 statement in which he said “the conflict of the last forty years created terrible divisions. It became a case of ‘them and us’. And that attitude deepened divisions further. If we want a better society it can’t be ‘them and us’. It can only be ‘all of us’.