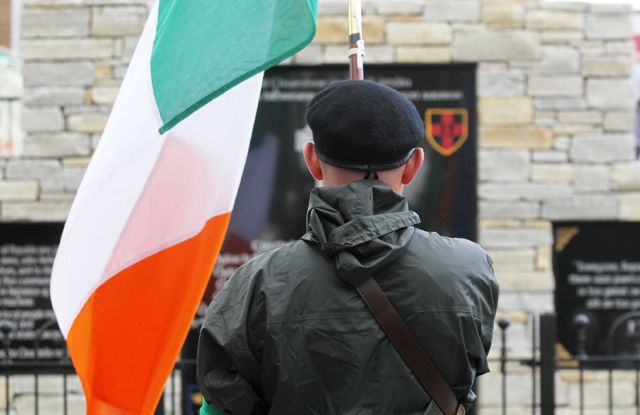 And they love it (see here). There’s no better fodder for the Sinn Fein PR machine than unionist protests, splits, street fighting and fits of apoplectic rage. It’s the oxygen that sustains them.

But I have this question: why flatter them with all the attention? Why riot? Why get yourself in a fluster?

I’ve been saying this for a long time: that mainstream society in the Republic of Ireland almost unanimously condemns the bloody history of Sinn Fein and the IRA. For the ordinary man or woman down south, Sinn Fein does not equate with modern, open, tolerant, internationalist notions of being Irish.

Yet unionists in Northern Ireland have come to regard Sinn Fein as the voice of Ireland. Unionism needs to take strength in the fact that Sinn Fein is but a fringe, protest party in the Republic. And to my detractors: yes, Gerry Adams could be the next Tánaiste; and yes Sinn Fein is making electoral gains, but so is the Front National in France, Golden Dawn in Greece, the Party for Freedom in the Netherlands.

Let me look at two specific examples which back up my point that the Castlederg commemoration and associated events are unIrish. 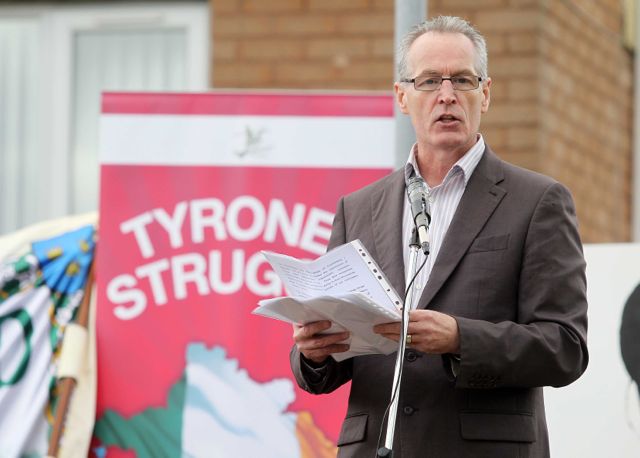 Gerry Kelly speaks during the parade.

My first point. At the Castlederg event, Gerry Kelly spoke warmly of the two IRA bombers whom he called “Ireland’s patriot dead”. Naturally this caused unionist uproar; the usual mayhem and hysteria. (But let’s of course not forget: Sinn Fein loves this).

Coincidentally to this article, Mike Nesbit here called on the Republic of Ireland’s main parties to say whether they agreed with the idea that the two dead men were “Ireland’s patriot dead.”

But what about turning your attention to the Sunday Independent, printed on the same day: where in response to the Gerry Adams apology for the murder of Portlaoise prison officer Brian Stack, Eilis O’Hanlon said:

“It’s hard to think of a senior political leader in any other democracy who would get away with this behaviour. Does Angela Merkel go for rides with the Baader Meinhof gang?”

Yes get that, an Irish columnist in an esteemed, authoritative and widely-read Irish Sunday paper, published on the same day as the Castlederg commemoration, compared the IRA and its Sinn Fein associates to the far-left German militant group, Baader Meinhof.

Eilis O’Hanlon continued, answering Mike Nesbitt’s plea and backing up my charge of being unIrish. She said: “If they could stop being so indulgent towards offensive terrorist pantomimes, that would be nice too.”

In the Sunday Times Kevin Myers likewise highlighted the hypocrisy of the original republican insurgency of 1916 when he said of them, “killers hailed as human rights activists.”

These are but only two careful and considered criticisms made against militant republicanism. I could cite dozens more that I have archived in recent years. This is the common but unheard narrative.

My second point. At the Castlederg event, Gerry Kelly said that the two self-immolated militant republicans “made us (as Irish republicans in the north of Ireland) free”.

Free From what? British oppression of course.

I’m not condoning or in any way excusing the discrimination and persecution of Catholics, but this Sinn Fein/Republican idiom and cliché is a shameful irony and hypocrisy.

Why? Although people forget or don’t know, in the decades after 1922, Ireland was an incredibly oppressive place to live. For Catholics as much as Protestants.

Fintan O’Toole explained this in his book ‘Up The Republic’ where he said:

“For most of its history, the state failed miserably in the basic task of ensuring that citizens were free from subjection to the arbitrary will of others. It allowed the institutional Catholic Church (as opposed to Catholics themselves) to exercise unaccountable and secretive powers in key areas of public and private lives of citizens, from access to contraception to basic public services such as healthcare and education. The state also actively colluded in grotesque systems of arbitrary power; such as industrial schools, Magdalene Homes and mental hospitals – incarcerating without trial a higher proportion of its citizens than the Soviet Union did.”

Yes, Ireland incarcerated, without trial, a higher proportion of its citizens than the Soviet Union did.

Fintan O’Toole then further said: “More recently, the state itself has been dominated by private interests. Corruption allowed wealthy citizens to purchase public policy, to the detriment of the majority of their fellow citizens.”

More Recently at the MacGill Summer School, Fintan O’Toole called both Northern Ireland and the Republic of Ireland a failed state.

Both were catastrophically mismanaged. So I’ve never gotten the republican’s messianic narrative, that if we can just get the Brits out, all will be fine, everyone will be free.

So for all those chaotic unionists, instead of letting the boils fester and rumble, why not take confidence in what Fintan O’Toole said in making a nonsense of the Gerry Kelly tribute to terrorists who “made Ireland free”?

It’s quite clear that it has been the increasing Europeanisation, internationalisation and secularisation that has been at the centre of the liberalisation of Ireland, both north and south.

It was these terrorists and paramilitaries that protracted the violence and retarded the economic and educational development of Ireland north and south.

To paraphrase Epictetus, it is only those who are educated and who have a job who are free.