You are at:Home»News & Current Affairs»“We sit back, we take it, we let them foul our good name”
Social share: 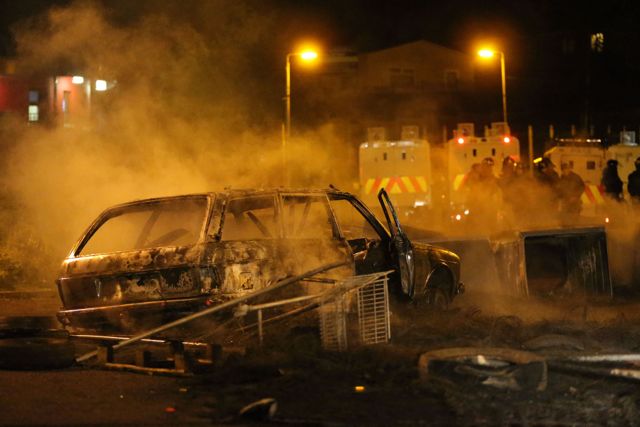 And by ‘bad’ I now mean towering levels of incivility, Buckfast-fuelled thuggery, recreational rioting and spill-open-your-stomach sectarianism. Once again Northern Ireland’s backward class has taken a chokehold grip on the running of the province.

How aptly the words of Alain Finkielkraut capture the state of affairs: “Barbarism is not the inheritance of our pre-history. It is the companion that dogs our every step”.

The majority people want peace, but each step in the process is dogged by the old engine of sectarianism, screaming and revving and kicking back. Like an on-the-loop re-enactment of the Protestant-Catholic religious wars of the 16th, 17th and 18th Century.

But the wretched fumes of foul and filthy sectarianism that the world has come to equate with the north of Ireland, is absolutely not Northern Ireland.

To that I ask this simple question: when are Northern Ireland’s forces of modernity going to stand up and break the hold held by the anachronistic forces of reaction?

Northern Ireland is now an exciting cosmopolitan place, populated by an educated and ambitious class. Holding back the modern majority is a unionist and nationalist class, mutually antagonistic and individually polarised, but united as a whole: both curdled by hate and messianic absolution.

In fact, this is a trend we’re seeing around the world. Andrew Sullivan wrote a piece in the Sunday Times of July 14 2013 under the title ‘From Tehran, Turkey and Texas, the battle for tolerance is upon us.’

Andrew Sullivan explained it like this: the old world order has been forever dislocated by the spread of liberal market capitalism and a tech revolution. As a result, an exciting secular class (a global village) is taking root and flowering a new and tolerant world.

Though, as in Northern Ireland, the creation of this new and tolerant world is not without pain: but dogged by reactionary blockheads and blowhards of the past.

Andrew Sullivan said: “What we are now seeing are the forces of modernity and the reaction to them dividing societies across the globe… The conflict is close to ubiquitous.”

We’ve seen it in Egypt, Turkey, Tunisia, Iran, across the Maghreb, in Brazil, in Russia and all around the world.

Young people are protesting against old order theocracy and authoritarian religiosity. They’re fighting for a new order of women’s rights, free speech, social liberalism and secularism. They want to be part of the new world of the 21st Century.

However in Northern Ireland our modern, outward looking class haven’t given fight against the clumsy grasps and spasms of pre-history. We sit back and we take it; we let them foul our good name.

As John Hewitt said fictitiously, ‘speak peace and toleration. Moderate your tone of voice and everywhere avoid what might provoke.’

But Northern Ireland’s modern class must give a voice of protest. As John Hewitt said, ‘this is my country… When it is fouled, shall I not remonstrate? My heritage is not their violence.’

Unfortunately we have a sterile step-in-line, know-your-place culture: a stifling mentality that hinders free thought, free expression and individuality – typified so perfectly by the DUP veto of libel reform.

The supposed people of modernity (characterised by young people like Hannah Nelson) have been kept down by autocratic politicians that have crafted a limp, servile, uncritical, unthinking mass.

But as Tom Hickey said in the wonderful book ‘Up the Republic’, young people need to develop ‘strong skills of contestation’. Our young people need the sort of free thinking and speaking skills that will allow them to question the calamity of others who exert arbitrary control over them.

Young people ‘must be equipped with the skills to contest the influence of a group of leaders over such matters as the interpretations of cultural traditions.’

I spent a year in Toulouse on the Erasmus exchange programme with one of the protesters. He was middle-class, moderate and of modernity; but this didn’t stop him from making his voice heard.

Whereas, when our politicians and jackboots on the street push the clock back, our middle and moderate classes just carry on with that old-tyme Irish fatalism.

In Northern Ireland we have a political and street-thug class wedded to the past. Both live in a world where moderation is anathema; they’re a doctrinal people in which doctrine is eternally true and cannot be changed.

The majority of Northern Ireland has got past the messianic absolutism and the barbarism that comes with it – only a select and minority set on the street and in government haven’t.

When are we going to stand up, say a clear and confident “No!” and make our barbaric inheritance history?