You are at:Home»News & Current Affairs»Opinion»Basil and John – politics of hope and aspiration
Social share: 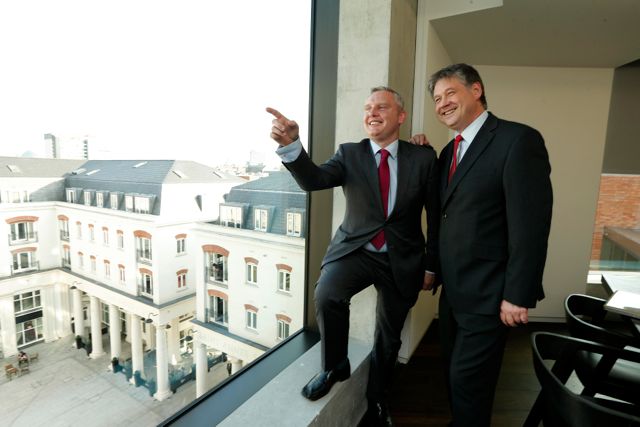 NI21 Party Leader Basil McCrea MLA and Deputy Leader John McCallister MLA at the launch of a new political party for Northern Ireland at the Metropolitan Arts Centre in Belfast.

The former deputy leader of the SDLP Seamus Mallon left politics in 2005 with a simple warning for Northern Ireland. It was this: voting for two extreme political parties could force the province into a Balkans style territorial carve-up between green and orange.

It turns out Seamus Mallon was right. 8 years on what we have is an executive and legislature ruled over by two reactionary, paranoid and über-patriotic parties motivated by head-butting opposite aspirations.

Both the DUP and Sinn Fein claim to possess the absolute and final truth with an unbending religiosity – though each mission is a vain one. But it hasn’t stopped the two opposite ideologies from playing to Northern Ireland’s 20th Century public.

Peter Robinson has regularly said that he and his party want to reach out to electorally capture Catholics.  Yet I don’t know what moderate, measured forward looking unionist would vote DUP. So I don’t know whom Mr Robinson is trying to kid.

And as for Sinn Fein, this new want to hug and love, instead of bomb and bag unionists into a united Ireland is, in the words of Dr Cillian McGrattan, ‘a nonsense.’

To this situation I say: Northern Ireland cannot be monopolised by fundamentalists. The shrill minority and self-interested politicians must give way to the mute majority. Northern Ireland needs new post-peace process politics: new policies, practice and parties free from the burden, curdling bigotry and mentally damaging messianic absolution of the past.

As I often say, adapting a quote from Einstein: “we cannot solve our problems with the same [parties]we used when we created them.” (Basil McCrea MLA said something almost exactly the same in the NI21 launch night speech).

Saying this is nothing new. Alex Kane has been talking about this for months and years. In the Guardian he has said:

“It is essential, therefore, that new parties emerge to challenge the stalemate, the lack of opposition and the absence of new thinking.”

In the News Letter Alex has said:

“There is room for something entirely and genuinely new… Something which has the courage to stake and take the Opposition ground – and actually markets itself as the voice of all of those people who believe that the present set-up is a farce.”

A party that I believe unlike any other gives political expression to the normal, moderate, measured, pragmatic, “chic”, cappuccino drinking and cosmopolitan Northern Ireland. The demographic part of Northern Ireland who really don’t care too much about whether they’re a unionist or nationalist, Protestant or catholic because they actually have an education, some ambition, gumption and a life and want to get on – the demographic part that has been for far too long the mute majority.

In spite of its detractors I really believe that NI21 bring something new to Northern Ireland. What NI21 brings to Northern Ireland is a genuine secularity and social liberalism. A secular separation not just from the church, but also a secular separation also from the past; from prescriptive and particularistic notions of identity; from the troublesome trope of strict political designation (the party intends to introduce a bill that would revoke labels on designation); from stale, flat, hackneyed, platitudinal and euphemistic language; and from the ethno-autocratic nationalism and unionism that pollutes minds and politics.

A separation from the ills of the past that gives the opportunity, to borrow a term used by NI21 itself, for a “fresh start”.

Going by my straw-man field research (and see a timeline of NI21 news and events to date that I’ve compiled here) I’ve found the response to be immensely positive. The young urban professional class and young adults are saying: holy crap these guys are actually talking sense. These guys have ideas and ambition. These guys are actually living in the 21st century of Mark Zuckerburg, of Facebook and Twitter. Nearly everyone with whom I have spoken with has been utterly captured and captivated by the message.

And I really feel it to be true what has been said by Basil and others on the launch night: that people aren’t “disinterested” with the traditional notion of politics and of creating a prosperous future. What they are is, “disillusioned”, perplexed and flummoxed by an alien political class, which speaks a different language.

And it’s not just unionists about whom we are speaking: I attended a pre-launch event in the Malone Lodge and heard and spoke with west Belfast, default Sinn Fein voters who wholly and unreservedly backed NI21.

The status quo of party politics will not like it and they’re not going to make it easy.

In an interview with Alex Kane Peter Robinson rubbished the party. He said: “I don’t think that they’re offering any product that’s unique, therefore it’s going to be very difficult for them to carve out a market for themselves.” And there you have it: if someone can actually say that Northern Ireland does not need new policies, parties and ideas there really is something very wrong. Deluded and deranged.

What we have with NI21 is a party that is comfortable in a plurality of identities. Secure with the current constitutional arrangement and pragmatically against banging on about a border poll or union flags. A party that really is willing to be bold, new and most importantly, shared: they actually give expression to the new generation that is Irish, Northern Irish and British.

They tweet in Irish, support the union and they want to give political expression to Northern Ireland’s gay, bisexual, counterculture, and immigrant communities. And Basil and John actually have a bit of charisma which gives them the ability to reach and can touch into the habitually apathetic parts of the electorate.

Now that is change. That is shared. That is the future.

But what people say really matters is an electoral test. Well I say this: I’m incredibly optimistic. Alex Kane said that come 2016 NI21 could take anywhere between 3 and 6 seats in the Assembly. Not amazing, but potentially a strong start. We will just have to wait and see.

But what I really like is the confidence of Basil and John. It reminds me of what the former Irish Rugby coach Declan Kidney said when he referred to Craig Gilroy and Simon Zebo having a certain air of “cool” around them – epitomising the new generation on the island of Ireland. That new generation is educated and raring to get on with life and mix with people of all faiths and communities. To me John and Basil have the same nerveless, unabashed “Gilroy cool” confidence to them.

All the grandstanding, mudslinging and stonewalling we see from Stormont is just insecurity and the neuralgic spasms of unfounded uncertainty. That’s the politics of fear and loathing – the sort of politics that ends badly. Basil and John give the politics of hope and aspiration.

Now it’s up to the silent people. However, as Christopher Hitchens said in the New Statesman: ‘silent majorities do not make history’ (‘King Billy’s Scattered Legions’, 1972). The people of Northern Ireland have a chance now to show that to be wrong.

“Debate doesn’t really change things. It gets you bogged in deeper. If you can address or reopen the subject with something new, something from a different angle, then there is some hope.”

Social share:
Basil McCrea DUP ireland John McCallister NI21 Northern Ireland SDLP Seamus Mallon Sinn Fein
Previous ArticleDealing with the past before it deals with us
Next Article A Twelfth Might…?