You are at:Home»News & Current Affairs»Dealing with the past before it deals with us
Social share: 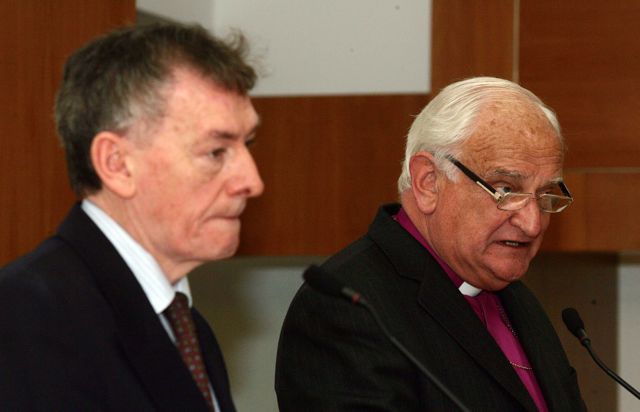 The Historical Enquiries Team has made itself a victim of our past – made the stick to beat its own back and made the wrong decisions when it came to reviewing conflict killings involving soldiers.

So, it must now hear the words of “no confidence”, and it is hard to see how it recovers from the report of HMIC – but we should also listen to the words of former Chief Constable Hugh Orde.

“It [the HET]was never ever the answer to the past,” he told me in an interview for the Belfast Telegraph.

“It was only ever going to be a tiny part, but there was nothing else,” he continued – “and, even now, there is not much else.”

So, the story can’t just end with the damming criticisms of double standards.

These things were being said before we read them in this latest report, and there are those who could easily say ‘I told you so’.

The challenge is what to do next and who is big enough to do it.

How do you take the past out of the hands and control of the police and intelligence services, and to use the words of Jarlath Burns, how do we deal with it before it deals with us.

Burns was member of the Eames-Bradley Consultative Group that produced a detailed blueprint back in 2009 and, today, he is arguing we need to get it back on the table.

Orde also asked:  “Where is Eames-Bradley?”

Its detailed set of proposals included a Legacy Commission with Investigation and Information Recovery Units.

This was meant to be the structure within which an attempt would be made within a five-year timeframe to try to address many of the unanswered questions.

There was also a recommendation for a Reconciliation Forum, but what do we have today?

A political battle over the Maze/Long Kesh ‘shrine’, Eames-Bradley gathering dust somewhere and the HET being kicked around with calls for it to be kicked out.

Who has the big idea – even any idea?

We all know what happened to Eames-Bradley.

It was dismissed in the panic caused by one of its recommendations that a recognition payment of £12,000 should be made to all families who lost a loved one.

“I am staggered that a report was allowed to be hijacked by one issue with everything else discarded,” Sir Hugh told the Belfast Telegraph.

“I assured Lord Eames and Denis Bradley I would be relaxed, indeed relieved, if they took the HET into a wider structure,” he continued.

“That would have increased its independence and transparency,” he said.

Eames-Bradley wanted the work of the HET to become part of the proposed Investigations Unit inside the Legacy Commission, but who even remembers that recommendation.

The proposals weren’t heard above the political shouts of shame.

In the here and now we have yet another mess, but also the reality spoken by Orde that: “To police the future, you have to deal with the past.”

Who wants to deal with it?

There is no sense or suggestion of political will and, almost twenty years after ceasefires, no plan, strategy or structure within which questions can be asked and answered.

In the Belfast Telegraph I wrote that the past is large in the present.

It is not yesterday or yesteryear, but today and tomorrow.

What it didn’t answer was who would participate and under what terms.

Before there is any Legacy Commission we need to know those things.

Then in a structured way think about what delivers the maximum amount of information and the best possible help to victims.

How is every story told and heard?

We need to understand and accept there is no such thing as one truth.

Maybe the design of such a process is beyond the capabilities of local politicians, and perhaps this will need international help.

We need also to understand that the past isn’t going to go away.

Just a few days ago families still searching for bodies that were disappeared in the 1970s and 1980s raised their voices to ask again for information.

For them there is no such thing as drawing a line. How could there be?

So, a process is needed.

It may have to happen in private, and it will have to address the question of amnesty or non-prosecution.

We need also to be realistic.

There will be no such thing as absolute truth from one side never mind all sides, and some answers being sought will hurt more than they heal.

This needs political will and international help.

In a tweet to me, Andree Murphy of the Relatives for Justice project accused the British and Irish Governments of disgracefully disengaging like neutral observers.

They were not and are not neutral observers and they have to be part of this.

For too long, the past has been a political play thing – a battleground.

That needs to change, and all the sides need to start looking for reasons to answer questions rather than excuses not to.

On the Eames-Bradley report, Andree Murphy believes: “There is much to sign up to and add to.”

In all the current fall out, let us all remember the HET was not about answering the past.

It was there because there was nothing else, and now we need something different.