You are at:Home»News & Current Affairs»Talking and walking in step – Brian Rowan on a process of challenges
Social share: 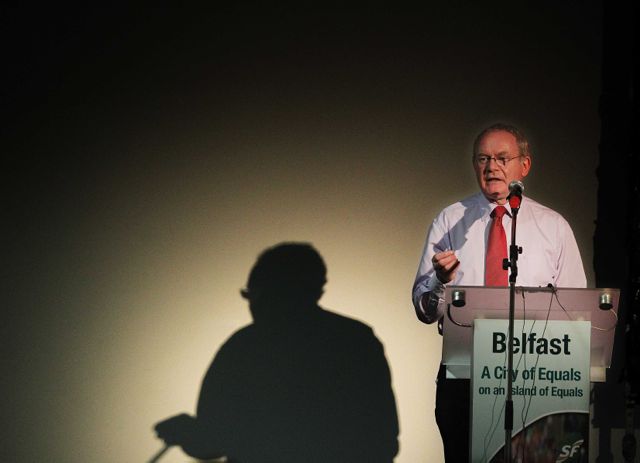 The deputy First Minister Martin McGuinness MLA delivers the keynote address at the conference “Belfast: A City of Equals on an Island of Equals” at the Europa Hotel.

The story on Friday was not just about the handful of loyalist protesters outside the Europa Hotel – it was about the people who were inside.

Yes, it was a Sinn Fein organised event, under the heading: ‘Belfast a City of Equals on an island of Equals’, but this wasn’t an occasion when republicans spoke to themselves.

A big part of this conference was about listening to others not of their community; others including the Chief Constable Matt Baggott, victims’ campaigner Alan McBride, former PUP leader Dawn Purvis, one-time soldier Glenn Bradley, clergymen Harold Good, Norman Hamilton and Gary Mason and Kate Turner of the Healing Through Remembering project.

At this conference, people spoke with great clarity on a whole range of issues – the flag decision in Belfast, suspicion about what republicans are really interested in when it comes to explorations of the past, the reality and meaning of sectarianism and the need to examine not just one community’s truth, suffering and history, but the other truths, sufferings and histories.

There was nothing that was not said or could not have been said, and Martin McGuinness, Gerry Adams and Declan Kearney listened; listened in a place once described in the headlines of the world’s most bombed hotel.

I chaired the conference, and opened the event by thinking back on that period.

“I would say that there are many in this room who still remember the days of rushed evacuations from this place – when people were given just minutes to get out.

“So, I think it’s an illustration of the journey this place is on that in 2013 republicans have spent not minutes, but weeks, trying to persuade people into this hotel today and into this conversation on the unfinished business of the peace process.”

Of course there were those who stayed away, including the Ulster Unionist leader Mike Nesbitt, who was to have been one of the keynote speakers.

He pulled out offended by a careless “so what” comment from the Sinn Fein education minister John O’Dowd in the heat of a television discussion.

Loyalist leaders also declined invitations – one using the protest outside as a reason for not attending.

There was once a time in this process when loyalists walked at the front into difficult conversations and negotiations, and did so when others ran away.

They need to get back to the front of the line, and not be spooked by a few protesters.

It is time for leadership in addressing the unfinished business of the peace process – those issues of identity, cultural expression, equality, mutual respect, parity of esteem and the past. 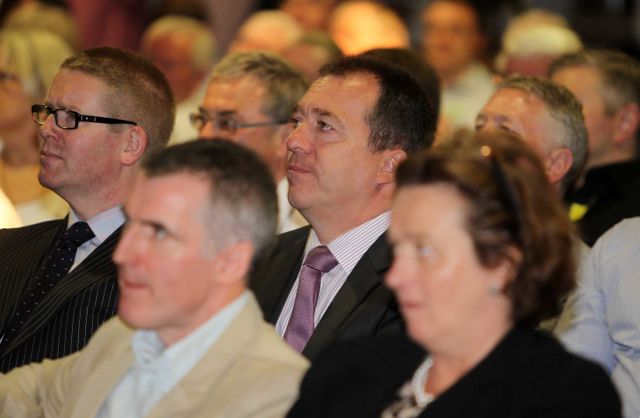 The Queen’s University academic Professor Peter Shirlow made a presentation to the conference and, as part of his preparation, gathered opinions of Sinn Fein; opinions that included the following.

That Sinn Fein talks to a script, thinks in a box, they don’t listen, they broadcast and there is no right to reply and people question the constant referrals to the past.

What was stopping a unionist or a loyalist leader saying those things on Friday?

Part of the problem was that this was a Sinn Fein organised conference, with one source speaking of “the choreography having to be right” to make a wider conversation possible.

Martin McGuinness responded to this by saying unionists should organise the next conference, or “better still” it should be jointly organised.

Only a few weeks ago the PUP issued an opening statement on reconciliation which is to be followed up by other documents.

On Friday Mike Nesbitt wrote in the Belfast Telegraph addressing the unfinished business in this process, and Harold Good urged republicans to respond without delay to that article.

So, everyone knows there is the need for a bigger conversation, and the challenge for the architects is to design a model and a realistic agenda for that discussion to take place.

My firm opinion is that this is work for international facilitators listening to key figures here and then shaping the process.

One thing we need to understand is what is meant by dealing with the past.

On Friday Martin McGuinness argued that the real challenge was to learn from it and not be trapped in it.

There needs to a better understanding of victims’ needs – not just those who speak loudest.

On Friday, I said we also need to remember that we are not alone in having to face these next issues and the next challenges, and I quoted the Palestinian doctor Izzeldin Abuelaish, who lost three of his daughters and a niece when an Israeli shell struck his family apartment.

In his book ‘I Shall Not Hate’ he wrote:

“Arguing over who did what and who suffered more is not going to get us anywhere.

“You can’t respect someone you don’t know.

“So let’s get to know one another by listening and opening our eyes to the other side.

“We need to encourage respect and equality,” he wrote.

So, here, we need to stop singling individuals out for blame – ex-prisoners and others.

We need to find the best mechanisms for unlocking information and answers, need to understand that culture is not about the different sides shoving flags down peoples throats, and we need help.

Help from people not trapped in the raw emotion of what happened here, people who can figure out the next steps and the best ways of taking them together.

In this constant tug-of-war between a United Kingdom and a United Ireland, we are ignoring and relegating other things that in the here-and-now need more urgent thinking.

We often talk about standing in the shoes of others, but too often we like the comfortable fit of our own.

It is time to walk and talk together before we poison another generation.