You are at:Home»News & Current Affairs»Changing the broken record of blame and fault
Social share: 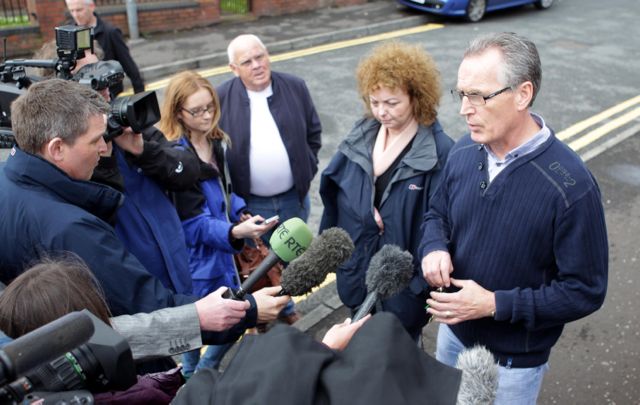 Friday night’s controversial incident on Carrick Hill in north Belfast came as a post script to the parade.

That ‘Tour of the North’ march had gone – but as it walked away the tension lingered as it so often does.

So, the work now is how to make things better before the next set of parades in just a few days’ time.

It won’t be easy.

On the nationalist side, new residents groups are emerging, and, within the loyalist community, there is a mood that marching is still a target of cultural war being waged by republicans.

In the middle of all of this, the hopes of personal/community policing are hard to find in the images of riot gear, barking dogs and the shoving and shouting of standoff.

Those who were there will tell you that the recent Cardiff dialogue was not about negotiating parades.

Rather it was about trying to change the broken record of blame and fault; trying to make sure that the words and actions of political/community leaders and police would not make things worse.

So, Friday has been a setback to that – those headlines and images of Sinn Fein’s Gerry Kelly being carried a short distance on the bonnet of a police vehicle after he had intervened to discuss the arrest of a youth.

On Monday, he tweeted: “On the one hand unionists accuse me of telling the PSNI what to do. On the other they have spent three days telling them to arrest me.”

All of this is a distraction – whether it’s trying to blame a few police officers for the events of Friday, or playing a poison game of political point scoring.

It avoids the main issue.

This street mess that comes together in parading, protesting and policing has to be addressed – not brushed aside.

The loyalist leader John Bunting is right when he describes the impact of the ensuing political war of words and how that spills down to the ground.

Measured words are often forgotten as the old rhetoric is replayed.

“When people see politicians getting on the way they are getting on, how do they expect us to get on with the work we’re doing?

“There is work going on on the ground that would shame them,” Bunting told the Belfast Telegraph.

This mess needs sorted, and if those who talked in Cardiff, and who have been talking back home since, can’t sort it by themselves – then they need to broaden the agenda and participation.

They need to bring others and the parading issue into the room – and there should be no excuse for not talking.

The marchers, the protesters, the police, the politicians, church and community leaders all need to be part of this conversation.

It needs those who can make decisions – and that means not those second, third or fourth or further down the ranks of the different leaderships.

A few years ago, Kelly – the villain of Friday night in the eyes of unionists and others – was something of a hero when at risk to himself he stepped in to save soldiers in a very vulnerable spot in Ardoyne.

I remember a military spokesman telling me: “There were some ugly moments and things were tense.

“While those people showing restraint may not wish to be acknowledged by us, I am bound to say: ‘Fair play for intervening’.”

That was nine years ago, and these situations remain highly dangerous.

There are those, of course, who want to use these street plays to undermine and damage the peace process.

They are rubbing their hands in the news and headlines of recent days and looking forward to another summer of discontent.

This is the danger in these situations and scenes.

That it doesn’t end with what we see.

For others there is a strategy – using street confrontations to bolster their argument that nothing has changed.

So, as the leaders of this place walk away from addressing these unfinished arguments, they walk into that trap being set by others – set by those who don’t want these street issues settled.

For those who are the leaders, the answer is something and soon.

Doing nothing is not an option.

This is about something bigger than culture and tradition.

It’s about the peace process itself – who wants it and who doesn’t.

Social share:
belfast Carrick Hill Gerry Kelly PSNI Sinn Fein Tour of the North
Previous ArticleCelebrating our Britishness and Irishness through the British and Irish Lions
Next Article Dealing with the past before it deals with us