You are at:Home»News & Current Affairs»Celebrating our Britishness and Irishness through the British and Irish Lions
Social share:

To my mind, the British and Irish Lions is the most beautiful of sporting spectacles. It’s the expression of our shared, layered and overlapping identities. It is identity and culture in motion.

It’s called the British and Irish lions and not the British and French lions for a reason. Ireland, Scotland, Wales and England are all intimately bound in a unique, interdependent way. In language, law, political economy and social habits; and as the British Council succinctly captured it, ‘Britain and Ireland: Lives Entwined.’ This is the doing of geographical locality and centuries of in and out-migration. Giving us a history ‘we don’t fully understand.’

But not even the most staunch, anti-Brit republican can deny the intimate links. As Anne Marie Hourihane said in the Irish Times: ‘It is an amazing fact of Irish life, north and south of the Border, that you can be a card-carrying republican while simultaneously supporting Manchester United and dodging your tax.’

Though it’s not just Irish republicans who recoil at wide-minded concepts of identity – Alex Kane recently pronounced people who proclaim to have more than one identity as sufferers of ‘multiple personality disorder’. Alex has no time for the now cliché and ubiquitous Hewitt quote, “I am an Ulsterman, I am British, I am Irish and I am European,” as pointed to earlier. 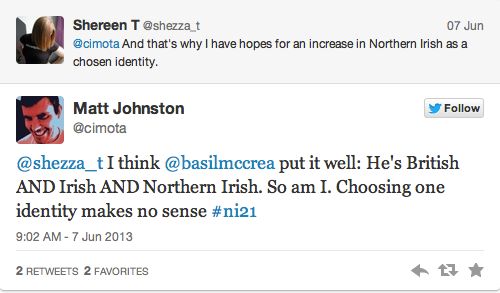 An ethnicised, prescriptive and particularistic interpretation of identity is just not the stuff of the 21st century.  In Northern Ireland we are ever more diverse, ever more plural, ever more interconnected and thankfully, ever more broad-minded. It’s no longer the simple divide of planter and the gael  – Ireland is home to Latvians, Lithuanians, Poles, Nigerians and Filipinos and people that really don’t care about silly things like religion and tribal politics.

For the Protestant, the idea that being a Protestant and a unionist precludes you from being Irish is nonsense. This sort of absolution against being Irish is but the kickback of doubt and insecurity.

As David Ervine said, “how the hell can you not be Irish when you are born and reared and all things affect you on the island of Ireland?” In William Crawley’s BBC Radio 4 broadcast, ‘Northern Ireland: Who Are We Now?’ it was explained how loyalists and unionists who were part of the Union and committed forever to the union pre-partition, happily called themselves Irish.

For the Catholic, before the ‘celtic nationalism’ made Irishness incompatible with Englishness and Britishness there was no bottom of the stomach revulsion at the British and the English. In Ancestral Voices Conor Cruise O’Brien rightly talked about what the ‘recklessly idiosyncratic’ definitions of what is ‘Irish-Ireland’ which emerged in the early 1900s.

As O’Brien said on the ‘new look’ nationalist: ‘he or she is catholic, preferably, but of not catholic, then thoroughly deferential to catholic-nationalists, on all questions relating to the definitions and practices of Irish-Ireland… He or she is passionately opposed to all forms of English influence in Ireland, including the playing of foreign games.’

All of this is incredibly unhelpful. Like I said earlier, there is absolutely no avoiding the intimate linkages. As David mckittrick had said on this site:

“So many British people [are]of Irish descent, and indeed though they don’t like to admit it a very high proportion of the population of the Republic is actually of British descent.”

Strict, absolutist interpretations of Irishness or Britishness is the stuff of a grey conformist regime. And in any case I don’t know of any person living in England who doesn’t call himself English before calling himself British. The same for the Scottish whether they be pro or anti-independence; and the same works for the Welsh.

If we are to go forward on this island we need to broaden our concepts of identity. We need to liberate ourselves from ‘small minded’ thinking.  Prescriptive, particularistic and fixed concepts of identity will absolutely not work.  The world has become too big and exciting for narrow interpretations of Irishness and Britishness.

And we can learn from Barack Obama’s speech to Northern Ireland of Monday June 17 2013, a day that will go down in our history. In his speech he said:

“Diversity is a source of our (United States) national strength.”

Of real import, Obama also said that the “symbols of history that are a source of pride for some and pain for others… are not tangential to peace.”

The pursuit of peace therefore requires us to embrace our diversity and become open to wider, more inclusive and accommodative notions of identity. When doing so we should remember America, a nation where people revel in their various double-barrel identities: a nation of Irish-Americans, Scots-Irish, African Americans, Italian Americans, Latinos and so on.