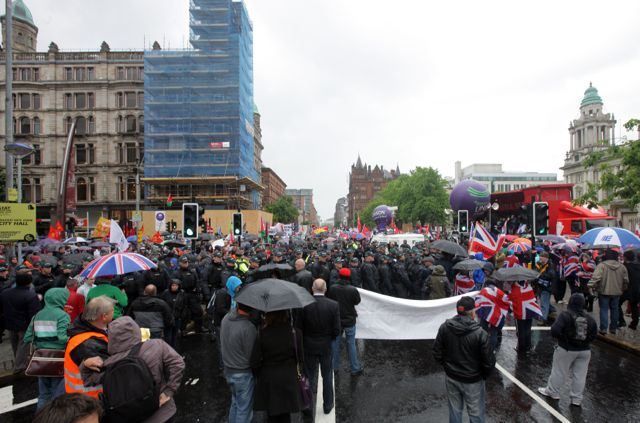 General view of the anti-G8 march in Belfast City Centre, Northern Ireland on the eve of a meeting of world leaders in Co Fermanagh

On Monday morning as the city’s clocks ticked towards eleven a chunk of Belfast began to breathe and move again.

For hours it had been wrapped in a kind of suffocating and smothering security blanket.

During these G8 days, we are watching unprecedented policing –security that in the eyes of many will have been over-the-top.

This is a ‘what-if’ operation shaped by worst case scenarios.

It is about hoping for the best while at the same time preparing for the worst.

For decades, this city lived in the shadow of threat and on Monday it had a President on its patch.

So, in some places, everything stopped or moved in the slow wheel turns and steps measured and dictated by security need.

The express train from Holywood to Belfast was anything but.

When it wasn’t stopped, it travelled at snail’s pace – at 5mph between the halt at Sydenham and Central Station.

More than once the conductor apologised, but what could he do on this day and in these security circumstances.

On the way to the station I noticed a Durham Constabulary police van in a convoy of vehicles – another reminder that this operation is not just about the PSNI and Northern Ireland.

This is big stage, and in that wider frame, there is much more to think and worry about.

Many of the world’s most-powerful leaders are here and, until they leave, absolutely no chances will be taken.

So the police numbers and other ‘hidden security assets’ in this operation are designed as a deterrent – to frighten off any threats or violence.

“Boredom equals success,” a senior police officer commented – meaning a lack of incidents will mean this huge policing mission has been accomplished, but these days are about so much more than security and all its paraphernalia.

On Monday, just minutes after the Obama convoy sped off from the Waterfront Hall, I bumped into the former Presbyterian Moderator Norman Hamilton in a city centre coffee shop.

He had been inside the hall for the President’s speech – a “magic and brilliant” moment to use his words.

“There were some very pointed comments about the road still to travel delivered in a warm and encouraging way,” he told me.

In what he had to say, Obama was pointing and pushing this place towards its next steps, talking both to our young people and to the conflict generation, reminding them in his many references to the walls that still divide us of an incomplete and unfinished peace.

The President name checked Sylvia Gordon of Groundwork NI and the initiative in a north Belfast park to begin to open up those walls by making a gate for people to walk through.

It is a project that involved many, and we shouldn’t take these things for granted.

There are still small minded people including some who want to unpick that good work that is happening in north Belfast and elsewhere.

“People need to understand the difficulty that we have trying to promote this work,” John Bunting of the North Belfast Community Development and Transition Group told this website.

“The gate is not the only initiative.

“You have shared housing on the Limestone interface, the Cityside project, the Duncairn Partnership and the ‘Events for All’ initiative,” he said.

He is describing jigsaw pieces in a process of peace building, but there are bigger challenges on that road Obama says we still have to travel.

The past, the needs of victims many of whom have been forgotten, marches, flags, shared housing and education as part of a shared future are things that still need to be discussed and agreed.

So, a part of these G8 days is about what this place still needs to do to develop and build its peace.

On Saturday outside the City Hall I watched a peculiar interface take shape as visiting police officers created a human wall between loyalist flag protesters and the bigger anti-G8 rally.

Some loyalists taunted those ‘mutual aid’ officers with chants of PSNI/IRA scum.

It was small minded and unthinking and it undermines the genuine concerns of the PUL community.

There are big issues still to be addressed, and they won’t be decided on the streets.

The leaders of loyalism and unionism have negotiated on bigger issues.

They need to talk these things through with others – these issues which are the unfinished business of the developing peace.

Much of the focus of recent days has been on security as Northern Ireland hosts the G8 Summit.

It has been a world stage, and there has been world attention on a place that is seen as peace success story, but we need to remember something.

Beyond these headline days made by the presence of world leaders this place needs to think about how it completes its peace.

We have all seen and smiled at that fun picture of Gerry Adams holding Sammy Wilson’s arm up during a Mexican wave inside the Waterfront Hall.

On a more serious note, it’s time for the leaders of this place to put their hands up for the next challenges.

It’s not about self-interest and playing to small crowds.

It’s about doing what leaders are meant to do.

Social share:
belfast G8 John Bunting Northern Ireland Obama PSNI
Previous Article“Peace, it’s up to us”
Next Article Out of sight – but not out of mind