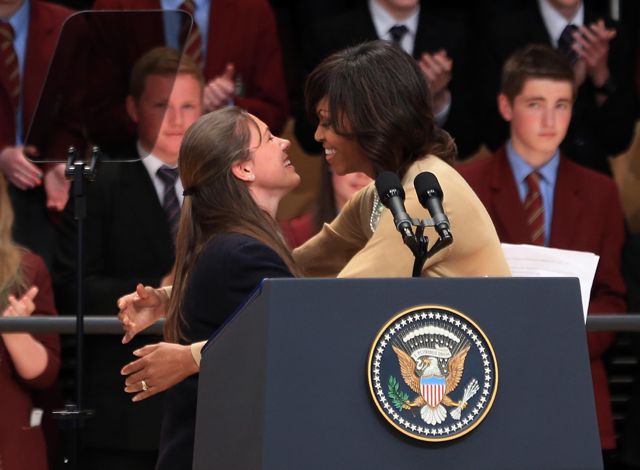 16 year old Hannah Nelson from Methody College, Belfast, gets a hug from the First Lady Michelle Obama at the Waterfront Hall in Belfast

The hosting of the G8 summit in Co. Fermanagh, at first glance, may appear to be a strange place for such an auspicious global event to be held. Yet, on reflection, Lough Erne is the perfect location for our world leaders to parley, as it is both the home of the Janus Stone and Celtic Goddess of War.

For many, the image of the Janus face symbolizes our perceptions of politicians, both local and global: who talk peace and prosperity while profiting from worshiping the Goddess of War.

Now, as we bask in the after glow of the global media spotlight, what are we to make of our G8 summit, seeking to ‘clean up capitalism’ while planning sectarian war in Syria and rendering onto the Taliban all that is the Taliban’s?

What lessons can we learn from hosting this global event to help us overcome our current post-conflict peacebuilding failures and finally realize the hope of 98?

While President Obama regaled us with Yeats, Heaney and McCann, in the hope that peace and poetry inspire the next generation, a more learned staffer might have quoted Patrick Kavanagh whose Epic poem captures more adroitly our Iliad, to better illuminate the ‘half a rood of rock ‘ integrity of our quarrel.

And yet, almost Janus like, the observations that have emerged from our G8 visitors appear at odds with the received and evidence based wisdom of where our peace process is currently at: with the ‘Duffy’s shouting’ and ‘McCabe stripped to the waist’ marching ‘along these iron stones’ of sectarian interfaces in Alexandra Park and Cluan Place.

While President Obama opined that Northern Ireland is the ‘blueprint’ for resolving global conflicts, Dr Michael Minch, Director of Peace and Justice Studies at Utah Valley University, speaking at the INCORE Summer School, believes we are ‘the world’s premier laboratory for conflict transformation and peacebuilding’ due to the ‘the concentration of scholars, professional peacebuilders, participants, and victims who are so knowledgeable, articulate, and accessible’.

Prime minister Abe, of Japan, has also hailed Northern Ireland as a ‘treasure trove of challenge, openness and innovation’.

Comparing such external observations with our own ‘everyday’ realities, of a failure to resolve the underlying causes of our conflict, now raises further reasoned questions on why our local peace building process has been unable to implement our own indigenous blueprint and draw on our ‘treasure trove’ of ‘scholars, professional peacebuilders, participants, and victims’, to effectively deliver a pervasive peace?

In choosing Kavanagh over Yeats President Obama may have been more forthright in chiding us for our failures to develop a post-conflict society that is fair and based on responsible egalitarianism rather than subtlety appealing over the heads of our current political elites to the next generation of leaders and urging them to complete the peace building task their parents began.

Yet in his wisdom, President Obama has taught us all a salient lesson. If we are to realize a sustainable and pervasive peace we can no longer expect our political elites to do it for us.  As he told us:

‘From the start, no one was naïve enough to believe that peace would be anything but a long journey. Yeats once wrote “Peace comes dropping slow.” But that doesn’t mean our efforts to forge a real and lasting peace should come dropping slow. This work is as urgent now as it has ever been, because there’s more to lose now than there has ever been’.

In following President Obama’s guidance, we all now need to develop a sense of urgency, to achieve an inclusive post-conflict peacebuilding society.

We can generate this urgency by following the advice of John Paul Lederach, the father of Conflict Transformation, and identify, nurture and encourage champions within the civil service, who have the skills and capacity to work collaboratively with civil society, to by-pass the political elites and begin to deliver peace and prosperity for the here and now rather than the future.

If Dr. Minch and Prime minister Abe are correct in their observations then we already have the expertise and innovation required to rise to this challenge.

However, as the next generation prepares to take on the mantle of leadership they must learn how to defeat the scourge of shared out sectarianism that has blighted our progress, towards a pervasive peace, to date.

In his study of ‘Identity and Violence’ and its ‘Illusion of Destiny’ the Nobel prize winner, Amartya Sen, reminds us that ‘the world is increasingly seen, if only implicitly, as a federation of religions or of civilizations, thereby ignoring all other ways in which people see themselves’, such as human beings, and that as a consequence ‘within-group solidarity can help to feed between-group discord’.

Therefore, our next generation of leaders must learn to see people as more than their ‘within-group’ religious identity and begin to appreciate our ‘other’ Janus face: not as an enemy but as a friend or neighbour not yet met.

With such new leaders, we may yet move beyond this G8 illusion of destiny, shaped by identity and violence, to realize the blueprint for sustainable conflict transformation as hoped for by President Obama, who reminded us all why there is a sense of urgency in achieving this goal:

‘Because beyond these shores, right now, in scattered corners of the world, there are people living in the grip of conflict — ethnic conflict, religious conflict, tribal conflicts — and they know something better is out there. And they’re groping to find a way to discover how to move beyond the heavy hand of history, to put aside the violence. They’re studying what you’re doing. And they’re wondering, perhaps if Northern Ireland can achieve peace, we can, too. You’re their blueprint to follow. You’re their proof of what is possible — because hope is contagious. They’re watching to see what you do next’.

This observation is also true for many people within these shores, in scattered corners of our towns and cities, yet to taste the rewards of peace and prosperity.

Therefore, with our ‘concentration of scholars, professional peacebuilders, participants, and victims who are so knowledgeable, articulate, and accessible’ in transforming conflict we now need to teach our children well so that our blueprint can become contagious enough for peace to transcend violence, conflict and war, both at home and abroad.

We need to help our children realize the dream of the man from Moneygall and move beyond the G8 destiny of global sectarian violence, to inspire the world, in recognizing and embracing our Janus faced nature, not of political deceit, but of embracing and celebrating the multifaceted nurture of our human being.

In so doing we can help our children to build a fair society, where our next generation of leaders practice the principles of Conflict Transformation, guided by middle-range managers, to help us navigate beyond the dire straits of our identity riven political elites, towards a new ‘treasure trove of challenge, openness and innovation’ in peacebuilding.

And, where our ‘second generation’ peacebuilders talk of inclusion and prosperity while profiting from the worship of responsible egalitarianism rather than the penury of shared out sectarianism: to make peace ordinary and chic in our ‘everyday’ lives.

Social share:
G8 Northern Ireland Obama
Previous ArticleOut of sight – but not out of mind
Next Article Celebrating our Britishness and Irishness through the British and Irish Lions