You are at:Home»News & Current Affairs»‘Teach your children well’
Social share:

The Good Friday Agreement has its detractors, but since 1998 much has changed in Northern Ireland.

Brian Rowan speaking at the event ‘Beyond the Wall’ with William ‘Plum’ Smith and Sean ‘Spike’ Murray said of the accord: “there’s been lots of progress; we’re in a much better place.”

But much remains to be done.

Duncan Morrow in the Irish Times recently spoke of political stalemate and storm clouds; and he himself asked: ‘where next?’

However Pete Shirlow came onto something when speaking on Capitol Hill. He stated the obvious and said that we’re living through a two speed peace process: one where the green and orange communities live in a perpetual cycle of claim and counterclaim; the other where a post-nationalist class lives as citizens of the global village.

The post-nationalist community is important. Jeffrey Peel spoke of them and their effect on Northern Ireland:

‘This society is normalising. It’s more accepting, more tolerant, less incendiary than it ever was. The Internet has made it more included in a global culture that moderates extremes and creates debate. The Internet has made this place less insular in a way that no other local cultural development could ever have hoped.’

They’ve elevated themselves above the past, the sectarian mudslinging and mindlessly partisan politics. These people are the future.

So it’s the first deprived grouping upon whom we need to focus. They represent our bloody past. It’s this community that’s holding back Northern Ireland. Stating the obvious a little but it needs said.

I don’t want to go too deeply into this question bar to ask: why are they holding Northern Ireland back? Why are some people living in the pre-1998 world where radicalised Catholics hate Protestants and radicalised Protestants hate Catholics?

To my mind it’s because, as Eamonn Mallie said, ‘many minds have not been decommissioned’. 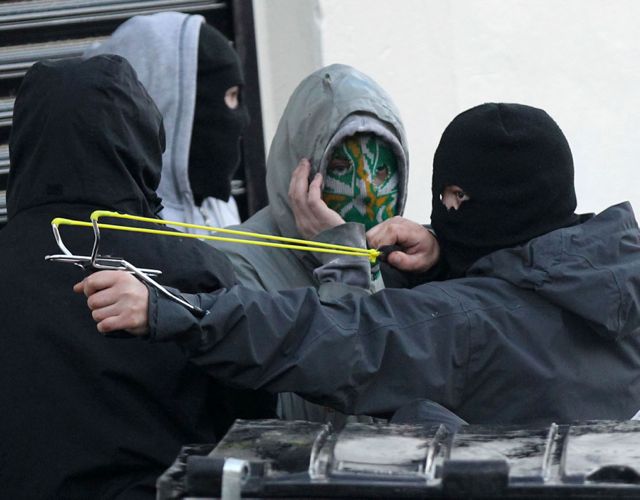 This is the deadly overhang of the Troubles: that men and women still hate. Radicals on both sides of the community may have put aside their weapons of terror, but they haven’t set aside their old prejudices.

These prejudices and hatreds, propped up by deprivation, are then passed onto their children. As I’ve said before on this website: young people in Northern Ireland are taught to hate.

Just look at the young and highly impressionable children who marched in a dissident republican parade in Ardoyne this Easter, dressed in full paramilitary regalia.

No wonder Assistant Chief Constable Drew Harris has said that it is “difficult to see an end” to dissident republican violence.

The same problem exists on the loyalist side of the community.

The video below probably captures why we are the way we are in Northern Ireland better than words could ever hope to do so. The video clip is a segment from a documentary by American news outlet Vice called, The European Capitol of Terrorism: Belfast, Ireland.

Vice correspondent: “For all the Americans out there, what’s the celebration (11th/12th July)? Why are you doing it?”

Child 2: “Battle of the Boyne and all that action there…”

When I saw this I felt sad. Sad that young people in Northern Ireland should harbour such nihilistic and narrow horizons.

But the video is important nonetheless: the segment gets to the heart of the issue. It tells us two things.

Secondly, our young people in Northern Ireland give expression to this prejudice as recreational sectarianism. As they grow they engage in recreational rioting and graduate into the ranks of paramilitarism.

As Trevor Ringland has suggested many times – we need less talking shops on the history – we need more workshops. By that I mean early intervention on our young people and problem families, good education and meaningful job opportunities.

As Montesquieu said: ‘peace is the natural effect of trade.’

Social share:
Catholics Good Friday Agreement Northern Ireland Protestants The Troubles
Previous ArticleSinn Féin and the Past: A Party in Failure – by Dr Cillian McGrattan
Next Article How to stop our hopes withering on the vine – by Sean Brennan