You are at:Home»News & Current Affairs»Opinion»How I long for the politics of left and right over the tribal politics of orange and green
Social share:

What I love about BBC Question Time every Thursday is the debate. The kind of debate that makes me envious: the debate of Left and Right politics.

The sort of stuff that gets the blood going: really noisy, vibrant and sometimes vicious, but above all – healthy debate. Think Owen Jones who champions the Left and stimulus spending. Think David Starkey on the Right who siren calls for low government borrowing and good fiscal housekeeping.

Think John Bird, founder of the Big Issue who by self-confession is on the Right, the Left and all over the political spectrum.

What’s great about the politics of Left and Right is that it is the battle of ideas: questions on the size of the government and the nature of society. 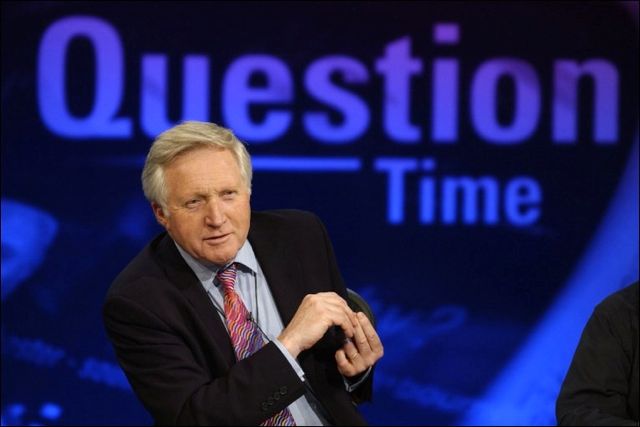 Questions like: is the government doing enough for growth? Is welfare too generous? Is immigration too high? Should we exit Europe? Should we be more socialist or should we be more free market? Is the IMF wrong? Is austerity bad? What can we do about youth unemployment?

Above all, what Left and Right debate is: it is tolerant and diverse. People of all shades of Left and Right are able to express their views; all of which are genuinely grounded in a common concern for growing the economy and for making the world a better place in which to live.

Then we have Twitter. The new communication tool which democratises and gives extension to the type of Left-Right debate we see on Question Time.

Why would I be envious of this?

Because in Northern Ireland we don’t have Left and Right politics.

We have the tribal politics of Orange and Green; and where politics of Left and Right shows itself in Northern Ireland, it’s quickly drowned out by old order politics.

Where BBC Question Time and Twitter host debate with a rainbow mix of views; televised discussion and Twitter in Northern Ireland gives the binary choice: protestant or catholic; unionist or nationalist; loyalist or republican.

Green-Orange also encourages politicians and the electorate to worry more about issues such as a border poll or the Maze site; as opposed to altogether more important issues such as the economy, youth unemployment levels and the level of economic inactivity.

Green-Orange debate also props up dysfunctional government. That being our all-party, non-Opposition strain of government that is more familiar to some of the world’s more undemocratic nations.

Our government’s dysfunction cab be typified by the recent scandal surrounding the closing of care homes. Much of this would have gone on unnoticed were it not for our province’s unofficial Opposition, that being Jim Allister QC and Stephen Nolan. 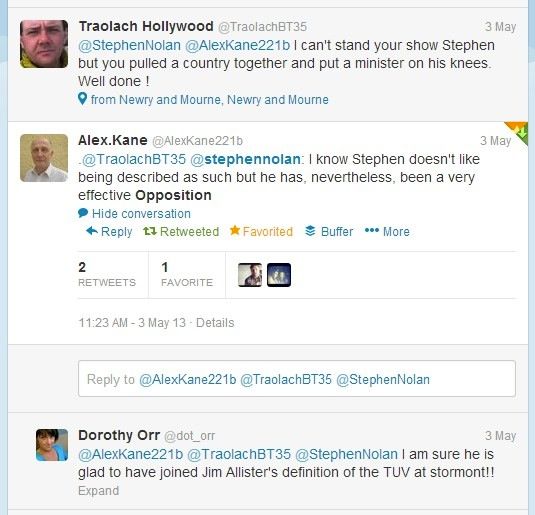 Also: Green-Orange politics is politics of identity and nationality. This is Dead-end politics. As Nigel Farage said on extreme patriotism:

“Patriotism is a bit like alcohol. You know, a couple of glasses makes you happier and makes the world feel like a better place; too much is destructive and ruinous, both for yourself and everyone around you.”

By moving away from Green and Orange and towards Left-Right politics we could make the break from political polarisation and lunatic fringe politics.

We need to give political expression to the normalised section of society in Northern Ireland. The ambitious and educated part of society which, as Jeffrey Peel said, is part of the globalised world.

They want to hear about the substantive issues that animate the rest of the world. Questions like the size of the economy or the size of the public sector; the level of inward investment or how to tackle unemployment.

Alex Massie in the Spectator said that an intra-communal realignment could ‘create a space for a new kind of Unionism that’s practical and aspirational, offering an alternative to the laager politics that presently dominates Northern Ireland.

‘A modern, liberal Unionism just might in time offer voters scunnered or knackered by the status quo an alternative that, in time, could change Northern Irish politics and make good some of the promise of the Good Friday Agreement.’

This echoes the sentiment of Robin Wilson who said that Left-Right politics in Stormont with an Opposition could help us to progress towards a more normal, democratic society.

To those who rightly say that Left-Right politics is no zenith, I agree. However it is less toxic, less corrosive, less murderous. People can leave the Left-Right debate at the door. When it comes to Orange-Green the stakes become a lot higher.

To conclude: Northern Ireland is locked in a state of peaceful stalemate. A deadlock between ‘enemies who loathe each other’ said Duncan Morrow.

To tackle this we need some inventiveness. We don’t need talking shops and forever reconciliation attempts. What we need in Northern Ireland is to be living, educating and working alongside one another under politicians who practice the politics of Left and Right.

Peace was brought to Europe through trade and economic ties. Peace was not brought about by endless talks. So in Northern Ireland we need Left-Right politics that has economic growth at its core, not Green-Orange politics which has identity at its core; which by extension has a dead end at its core.