You are at:Home»News & Current Affairs»Forget the bogus gods and accept the authentic mammon
Social share:

Maybe it’s time to update Winston Churchill: because, ninety-three years after his bleakly cynical observation, it’s clear that it’s not just the ‘dreary steeples of Fermanagh and Tyrone’ which continue to bear witness to the integrity and duration of our differences here. 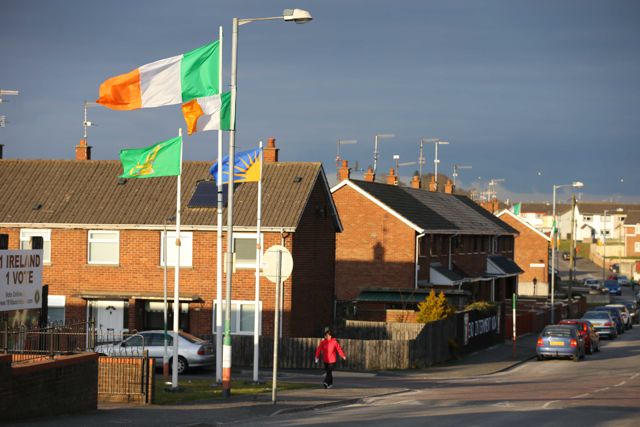 We are probably more polarised now than ever before. Indeed, our polarisation has the stamp of authority on it this time – for we agreed to it in a referendum in 1998 and continue to vote for it in elections.

We return the same people, with the same baggage and the same grudges and then feign surprise or shock when they continue to do what they have always done!

We have locked them into a system where mutual hostility is tempered by mutual veto and they’re all afraid to move because they believe it would lead to mutual assured destruction.

My goodness me – and we wonder why there’s been no progress on building a shared future?

And yes, I do accept that for all of its faults our stumbling, bumbling process has probably ensured that hundreds of people haven’t been killed or injured.

People are alive today because of what we agreed to in April and May 1998. But we cannot continue to kid ourselves that the weary mantra – ‘sure it’s better than it used to be’ – is a sound enough bedrock from which to make the transformative changes we still require.

Let’s focus on just one thing: why are flags important to us? If we really do have a peace process then why does the Tricolour still fly across so many parts of Northern Ireland, while the Union Flag flutters in so many other parts?

The answer is simple: it’s about identity. It’s about marking out territory. We are doing what dogs and cats do: leaving our own scent—indeed, the very essence of ourselves. We are saying, to ourselves as much as to others, ‘this is our land: this is our country.’

And the liberal, supposedly pluralist middle-classes shouldn’t get too snooty when they trot out the clichés about a flag not putting food on a plate. Maybe so, but the pluralists tend to live in their own areas and socialise within their own circles just as much as those who raise the flag or wrap themselves in it.

The pluralists—many of whom have just opted out of politics and voting (and thereby facilitating the institutionalising of sectarian politics in the Assembly) – are just as much a part of this ‘us-and-them’ world as the rest of us. 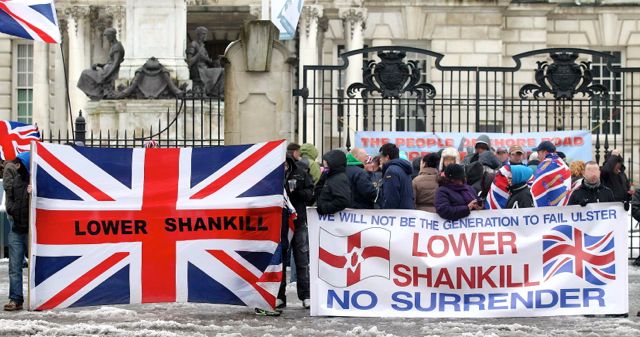 And the reason we need to mark out our territory and our separate identities is because we have chosen- yes chosen – to divide our territory rather than share it.

We cannot share it because we cannot agree on ultimate ownership.

That battle of wills will remain an inescapable fact of political life in Northern Ireland.

Similarly, it is not in the interests of unionists to prove how well they can work with republicans, because in so doing—and in removing the old hatreds and obstacles – they risk the possibility of increasing numbers of people thinking that both sides could actually work together quite well in a united Ireland.

And because they can’t help each other (without the risk of damaging their own arguments and core voter base) they are forced to play to their own galleries: forced to prove, on an almost daily basis, that they haven’t reached some sort of touchy-feely, cosy consensus with ‘themmuns.’

That’s why the separate, separating badges and symbols matter. It’s why flags matter – even to those who have never flown one outside their own front door.

So, here’s the 64,000 dollar question: is there anything we can do to create a climate in which flags and symbols don’t matter as much as they do and have always done?

For so long as people do not agree on the political and constitutional future of Northern Ireland then for so long will it remain impossible to reach agreement on anything which could properly and credibly be described as a shared future.

Forms of words will be constructed to suggest that there is movement and improvement. But in precisely the same way that ‘integrated education’ morphed into the much more woolly ‘shared education’ (which often resembles 1950s Alabama bussing without the bus) so too the ‘Together: Building a United Community’ strategy will morph into occasional tea dances at Belfast interfaces.

None of it has anything to do with the reality of our situation: it’s simply a smoke and mirrors PR operation (like an Andrew Lloyd Webber musical on ice) to convince potential investors and assorted national, international and EU funders, that all is well in our wee world.

But all is not well in our wee world. Peter Robinson and Martin McGuinness travel the world together to fly the flag for the ‘new era’ Northern Ireland: yet it’s a flag that neither of them actually cares about.

Meanwhile, Sinn Fein and DUP supporters fly their own flags in their own areas and conferences – and that’s the only flag that really matters to them. The flag that sums up their identity: an identity which deliberately excludes the other side.

Let me offer a suggestion: and no, it’s not a solution. Why don’t we just stop pretending that we want a ‘shared future’ negotiated by the DUP and Sinn Fein?

If we really did want all of the political/social/educational integration which everyone seems to chitter on about (and seem obliged to plonk somewhere in their party manifesto and Programme for Government) then we would have seen evidence of it happening of its own accord.

But we haven’t. And I suspect we won’t.

So why don’t we just get on with ‘rubbing along’ together and see what happens. Let the Assembly and Executive confine themselves to the big issues (health, employment, investment et al) which don’t come down to ‘us versus them’ votes and petitions of concern every other day.

And maybe if they can be seen to be making progress there, it will help repair the disconnect and disengagement which is undermining the process and reducing confidence in the institutions.

At the moment we have the worst of both worlds: incompetent, uninspiring and often irrelevant government and a seemingly congenital inability/reluctance to address legacy and shared future issues.

If the time is ever right and people feel comfortable enough to lower their flags and push their symbols into the shade, then I’m sure we’ll realise it.

But let’s not force the issue or imagine that we can legislate them into liking or respecting each other, let alone building a shared future together!

Social share:
DUP flags Martin McGuinness Peter Robinson Programme for Government Sinn Fein territory The Assembly
Previous ArticleHow I long for the politics of left and right over the tribal politics of orange and green
Next Article To be seen and heard – Why it’s always good to talk – by Brian Rowan