You are at:Home»News & Current Affairs»Opinion»Same-sex marriage will come to Northern Ireland
Social share: 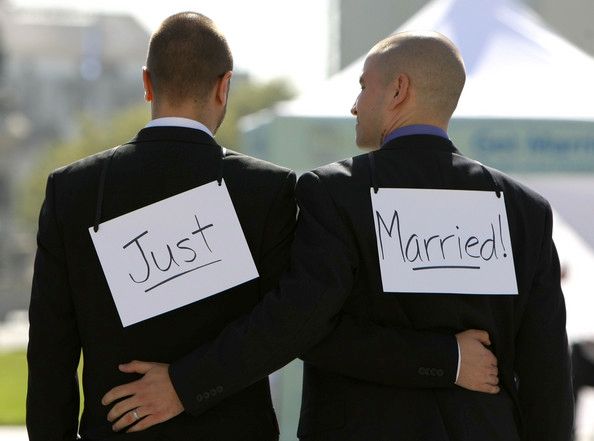 The passing of Margaret Thatcher reminded me of something important. Her generation was marked by the question of whether homosexuality should be legalised.

Today, our generation is marked by the question of whether homosexuals should be able to marry. A divisive issue that political blogger Andrew Sullivan has called, ‘the civil rights issue of our day’.

Daniel Finkelstein made an important point on the societal changes that have occurred since the Thatcher era: ‘the disputes that absorbed Mrs Thatcher’s generation now seem bizarre and the language and style antiquated.’

This is my contention: that today’s argument against gay marriage will be tomorrow’s vintage.

My other contention: whether it is the will of the courts or the will of a constipated Stormont legislature. Same-sex marriage will come to Northern Ireland.

Forgive me if this offends you. This is not my intention. I’m non-partisan on the matter. My only intention is to present events and the situation as it is.

So why do I feel gay marriage will come to Northern Ireland in the coming years? To explain, we need to consider a number of points.

Firstly, we need to consider our cultural and legislative history.

Cast your mind back over the recent history: you will see a graphic times cape from where we have come and the tectonic shifts that have occurred in law, culture and in minds.

For centuries homosexuality was outlawed and gay men and women were subject to grave mistreatment. In 1533 the Buggery Act made all sexual activity between men punishable by death. A chilling legal reality that was tacitly abandoned in 1836, but remained black letter law until 1861.

In 1885 lawmakers tightened up the law by enacting Section 11 of the Criminal Law Amendment Act. That new law ensured that authorities could prosecute homosexuals for sexual acts where buggery or attempted buggery couldn’t be proven.

Fast forward to 1951 and homosexuality was still illegal and an alarming mind-set came with this: men convicted of homosexual acts were routinely offered the option of a medical ‘cure’ instead of going to jail.

Though ten years later a UK opinion poll found that 93% of the population still regarded homosexuality as an illness that required treatment.

Then the milestone moment came.

In 1967 the Sexual Offences Act legalised homosexual acts in England and Wales between consenting men. However a number of qualifications came with the new law. Sexual acts had to be carried out in private and those participating had to be aged 21 or over. In Scotland homosexual relations remained illegal until 1980.

Then Northern Ireland’s moment came. In 1982 homosexuality was legalised in the north of Ireland.

An important caveat comes with this point however: the legality of homosexuality was actually imposed on Northern Ireland. It did not come from within. It came from the European Court of Human Rights. The Strasbourg court adjudging that Northern Ireland law violated the Article 8 right to respect for one’s private and family life.

The Republic of Ireland legalised homosexuality in 1993.

Secondly, we need to consider where we are now.

As of 2005 same-sex partners in the UK and Northern Ireland have been able to enter into a civil partnership thanks to the Civil Partnership Act of 2004.

As Supreme Court Judge, Baroness Hale said, ‘(civil partnerships) accord (same-sex partners) the benefits of marriage in all but name.’

For many however the status of civil partnership is not enough. It is for some people, ‘marriage-lite’.

Since 2005, minds and our culture have continued to change. And as is the tradition in our country, a change to the law has followed the change in culture and in mind-sets.

Now in 2013, a Bill that allows for same-sex marriage in England Wales is confidently passing through the Westminster legislature.

However in Northern Ireland the story is different. Since Stormont has devolved competence on the issue, same-sex marriage will not be coming to Northern Ireland just as quickly as it is coming to England and Wales (the motion for marriage equality having been defeated by a voting coalition of DUP and UUP members).

Either way: history has shown that the law follows culture. Therefore it’s plain to see that marriage equality, sooner or later, will come to Northern Ireland.

In Northern Ireland we need also be conscious of the European Court of Human Rights; that venerable institution that legalised homosexuality in this jurisdiction not so many years ago.

Thirdly, we need to consider where other nations now stand.

New Zealand recently passed legislation that allowed for same-sex couples to marry by a confident majority of 121 to 77.

This development is part of a global liberal trend towards marriage equality. A total of thirteen countries have now enacted law that affords same-sex couples the opportunity to enter into civil marriage.

Same-sex marriage is also performed in parts of Mexico, in nine states in the US and in Brazil, civil unions can be converted into marriage.

Fourthly, it’s useful to consider the debate in America – the world’s cultural hegemon.

It’s evident that America is undergoing a slow but inevitable transition to full marriage equality. Obama has made it a central priority. Making this clear in his second inaugural address:

“Our journey is not complete until our gay brothers and sisters are treated like anyone else under the law – for if we are truly created equal, then surely the love we commit to one another must be equal as well.”

The debate among US commentators also gives us a good viewpoint to where America is going.

In a recent discussion with Charlie Rose, Professor Akhil Reed Amar of Yale School of Law said that same-sex marriage will exist in all 50 US states in the next 5 to 10 years – whether it comes through the action of the nine federal Justices of the Supreme Court or by other means.

Professor Amar attributed this prediction to trends in society which he called a “massive social revolution”.

US opinion polls are testament to this. A poll by ABC News/Washington Post found that 81% under the age of 30 support gay marriage. Support for same-sex marriage has also enjoyed exponential growth in US senate.

Although the gay community in the US faces an ominous opposition: a Republican Party agitated by religious and ideological fervour. Only one republican senator supports gay marriage for the US.

Prominent US blogger and gay rights activist Andrew Sullivan also makes an important point. As gay people become ubiquitous, we will all come to know a gay person.

With this will come ever more acceptance and an acknowledgement that we cannot deny our brothers and sisters the rights under law that heterosexuals enjoy.

Andrew Sullivan said in his discussion with Charlie Rose, “every time (someone) meets a gay person, they will say, do I want to deny my son, my daughter, my co-worker these rights?”

Sullivan also challenged those who accept civil partnerships but not civil marriage on the Baroness Hale point. Saying: “But if you’ve given away the substance of the argument, why are you withholding the name?”

Fifthly, with history in mind we look to the future.

A regard for history tells us that we are on an inevitable journey towards full marriage equality. The arc of history is slow but it tracks towards justice and equality.

In a few words: as demographics transition, our culture and the law will change and evolve – or to put it more crudely: as Northern Ireland’s old guard retires, a moderate and more outward looking class will replace them and so replace the old law.

This will be a class, who like Finkelstein and Professor Amar said, will look back and think how quaint and antiquated it all was.

Napoleon Bonaparte captured the essence of this social and cultural evolution:

“To understand the man you have to know what was happening in the world when he was twenty.”

For the gay community, the wheels of justice and equality may turn slowly, but they do so beautifully.

Finally, we must also have a regard for the conservative forces that reject same-sex marriage.

We must also have regard for another phenomenon that we have witnessed: a liberal condescension to the traditional heartland in the UK and Northern Ireland that borders on a form of liberal fascism.

We must respect the view of others who oppose gay marriage. As it was said in the Irish Times recently, the conservative tradition brings a vital energy and plays an important balancing role in society.

People who oppose gay marriage are in the main part not bigots. They simply want to maintain the status quo. They grew up in a different world and are bound by their religious teachings. They do not want courts or politicians to change things. And so we should respect that.

On that point, it would be preferable to see same-sex marriage come from within Northern Ireland; that it is an organic and bottom up process. However, my concern is that people in Northern Ireland are, without being rude, years away from that.

I share in that dilemma. Speaking truthfully, having grown up in a different world I find the concept of gay marriage a little alien. But then again, having grown up with gay people it feels alien to deny those friends the basic right to marriage that I enjoy.

It would take generations for the worst of Northern Ireland’s prejudice against homosexuals to pass. So it’s my argument that an outside court will bring same-sex marriage to this jurisdiction.

Finally, a note on the purpose of the Stormont Assembly is important.

It is incumbent on the Stormont Assembly to make Northern Ireland the most attractive place it can be for its citizens, tourists and for foreign business.

Therefore it is the responsibility of the Stormont Assembly to pass open and business friendly legislation.

We do not want to be seen as a place that is frankly, parochial and out of touch with the mainstream.

Only recently, Stormont blocked the recent Defamation Bill that would otherwise have brought our libel and press laws in line with the UK. As we heard from Lord Lester QC this is not good for press freedom and freedom of speech in Northern Ireland.