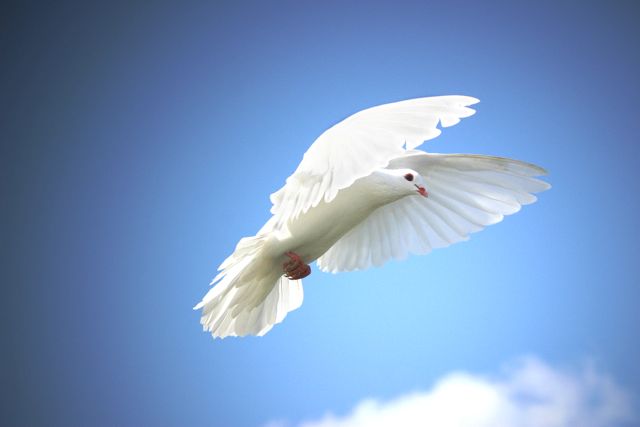 In 1993 the ceasefires had not yet arrived and the IRA was still at war.

Its message that Easter was delivered on video – inside an envelope dropped onto a table in a café in west Belfast.

“That’s for you Brian,” a man said – the only words spoken in a passing few seconds.

After the BBC showed part of the film, it became newspaper headlines the following day.

The message to the British Government was encapsulated within a few words spoken by a woman: “We call on our enemy to pursue the pathway to peace or resign themselves to the inevitability of war.”

On the day of those headlines Gerry Adams was spotted visiting John Hume and the news focus then switched to their dialogue – the talking that eventually made ceasefires and political negotiations and agreements possible.

In conflict there always has to be space for dialogue and persuasion, and this Easter, twenty years on, there is another offer to talk.

Earlier this week as part of a news report for UTV, I interviewed the Sinn Fein Chairman Declan Kearney.

It is the necessary work of peace-building, not something to be feared or condemned, but rather an initiative that will attempt to bring everyone inside the frame of exclusively peaceful, political and democratic methods.

This is an initiative that urges dialogue within and outside the republican community and, which at one tier, opens a door for talks with armed dissident groups.

There are, of course, no guarantees that the invitation will be accepted and that even if it is that it will achieve an end to violence – but it has to be tried.

“This should be a time for discussion within republicanism  and then for republicans to engage in  outreach much more expansively with all sections of opinion in Irish Society to work out collectively how we as a society can create an agreed Ireland and an Ireland that ensures that we live at peace with ourselves,” Declan Kearney explained.

Other republicans – those who fall within that frame of dissident – will speak at their events, and speak at a time when there is this offer to talk and the challenge to step inside a dialogue.

If they accept that offer, then part of any discussion will ask for an explanation of continuing armed actions – what they think can be achieved.

In that UTV report earlier this week Ciaran Cunningham of Republican Network for Unity (RNU) described armed struggle as a “result of the legacy of British occupation in Ireland…a residue of that legacy – not something we are going to be promoting or not something we are condemning.”

The answer avoids questions in the here and now – what is the purpose of continuing armed actions, what will they achieve?

Cunningham replaced Carl Reilly as national Chair of RNU, and Reilly is linked to the leadership of the faction Oglaigh na hEireann (ONH).

Its recent activity includes a planned mortar bomb attack on a police base in which the device failed to launch, a car bomb abandoned in Fermanagh, a device that only partially detonated near the M5, and two booby trap bombs, one that fell from a car driven by a soldier, the other spotted by a police officer.

These failures are not just down to operational/technical flaws and security vigilance.

There are other factors high among them the fact that this organisation is compromised both within its ranks and also by the surveillance conducted by police and MI5.

ONH is not the only armed group.

There is a dissident IRA formed as a coalition of several groups and individuals, but these wars are going nowhere.

No one is denying the right of republicans to organise politically against the Sinn Fein strategy.

Declan Kearney made that very clear in his interview.

So the question to those republicans in opposition to the Adams-McGuinness process is whether they are prepared to use words rather than bombs and bullets to make their arguments.

They cannot argue that they are being ignored or isolated.

“The door is absolutely open,” Declan Kearney told me – “and it would be our firm hope that all republicans would respond to this initiative.”

Unionists also need to give this initiative, not just space, but support, because if it happens, and if it makes progress, lives could be saved.

It is another part of the road to be travelled on a long journey out of conflict and towards some type of peace.

We have come a long way from the war message of 1993 to the talks offer twenty years later.