You are at:Home»News & Current Affairs»Truth and Apology – Two different things not to be confused – Brian Rowan writes
Social share:

A few weeks ago the question posed on a television politics show asked: Is it now time for apologies all round?

It was more thinking and talking out loudly about our unanswered past; a question prompted by something the Sinn Fein President Gerry Adams said in the Dail after the murder of Garda Adrian Donohoe.

That shooting during a robbery at a Credit Union near Dundalk made the republican leader think about previous events and another killing. 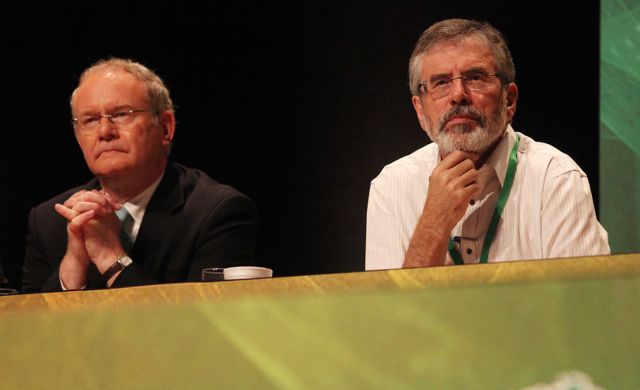 “The death of Garda Donohoe has also provoked memories of the killing of Garda Jerry McCabe and the wounding of Garda Ben O’Sullivan in June 1996,” Adams said.

Those shootings back then were linked to the IRA and, 16-plus years later, Adams had this to say:

“I want to apologise to Mrs McCabe and the McCabe family, and to Garda Ben O’Sullivan and to the families of other members of state forces who were killed by republicans in the course of the conflict.”

In these words, Adams restricted his comments and this apology to actions in the Republic.

“I am very sorry for the pain and loss inflicted on those families,” he continued.

“No words of mine can remove that hurt.

It didn’t take long for a follow-up question to be asked – a question about IRA actions in another of its theatres of operation.

What about the RUC officers targeted and killed by republicans?

The past has many such questions for all sides, and it would be foolish to confuse any truth or information-recovery initiative that explores the decades of conflict and ‘wars’ with an apology process.

There is nothing to suggest that the IRA will say sorry for actions taken against those it would once have termed legitimate targets – but it is not just about republicans.

This issue of sorry raises questions for the many sides.

Prime Minister David Cameron has apologised for Bloody Sunday and for the killing of Pat Finucane, but the State is not going to say sorry for those operations in which the SAS or other undercover Army units engaged and killed members of IRA active service units.

Remember also the narrow frame within which loyalists announcing their 1994 ceasefire apologised.

It was to “innocent victims” only.

Whatever you choose to call what happened here over several decades – whether war, conflict, terrorist campaigns or the Troubles – many of the deaths will pass without apology or the word sorry being used.

This is a truth, a reality we need to understand before we even get to the point of a process of questions and answers.

There is nothing to be gained from raising expectations or giving false hope.

Just read what Sinn Fein’s National Chair Declan Kearney wrote in a recent edition of the republican newspaper An Phoblacht:

“There are many victims on all sides,” he said.

“There have been many thousands of deaths and injuries caused by all sides,” he continued.

“Demanding that Sinn Fein repudiates the IRA is as much a cul-de-sac as any expectation that political unionism will repudiate the B Specials, RUC and British Army.

“That becomes a blame game which resolves nothing,” he wrote.

Kearney had previously described the frame within which sorry might be said to acknowledge hurt and suffering but not as an apology for the IRA campaign.

The IRA is not going to de-legitimise its war and nor are the loyalists.

So, it will never be the right time for all sides to apologise for all actions because in their thinking that would reduce them from soldiers or volunteers or freedom fighters or commandos to criminals and murderers.

William ‘Plum’ Smith, a former Red Hand Commando prisoner who chaired the 1994 loyalist ceasefire news conference, recently said that prosecution and persecution are not ways to deal with the past.

So, before any process of truth or information-recovery is constructed, people need to understand into what they are entering.

Families of victims who ask a question expecting an apology may be hurt again by the answer.

There will be shootings and bombings that all sides will continue to justify; to explain in a war context and the word sorry will not be spoken or heard.

So, when we talk about the truth of the past we have to understand that this is one of the cold realities of a decades-long conflict.

It should not mean that nothing is done, but we need to find out what is possible and what might help.

It is something that Declan Kearney again addressed in a weekend conference speech – the possibility of building a reconciliation process in the here and now.

“The rhetoric of recrimination and whataboutery has nothing to offer. It will ossify politics and undermine the potential for new thinking,” he said – adding:

“This is a period which requires leadership, initiative and courage from all political parties and leaders:

“- a willingness to open our hearts and open our minds to the need for compromise, generosity and forgiveness by us all;

“- acceptance that engagement and dialogue are key to continuing the journey of transformation begun by the peace process.

“- commitment to design political processes which facilitate acknowledgement of the pain, resentment and hurt in all communities, unionist and republican; which has been done to us all, and caused to others.

“- and agreement to try to heal past hurt and injustices by what we say and do in the future as leaders and parties.

“Engagement and dialogue have brought us to this point, and shown what is possible in our peace and political processes,” he said.

Everyone and every side understands that more has to be done – the questions are within what structure and within what rules?

Not every question will be answered – but let’s find out what answers are possible and within what context, and let all sides do it in the here and now.