The American Crisis of 1776 and the Flag Protests – A Lesson from History:

Today Loyalists across Northern Ireland have concerns, that their own government is threatening their rights as British subjects. Over 230 years ago a similar argument was being presented in London, by a delegation of British subjects from the thirteen North American colonies. They viewed the taxation and trade laws being imposed on them by the Parliament as an infringement upon their rights as British subjects of the crown. The rights they believed had been guaranteed as a result of the Revolution of 1688.

There is a Loyalist feeling of abandonment deriving from the lack of political representation and reality that Unionist parties are more concerned with issues that affect the middle class voters, rather than problems and fears which are rife in working class Protestants mind-set. 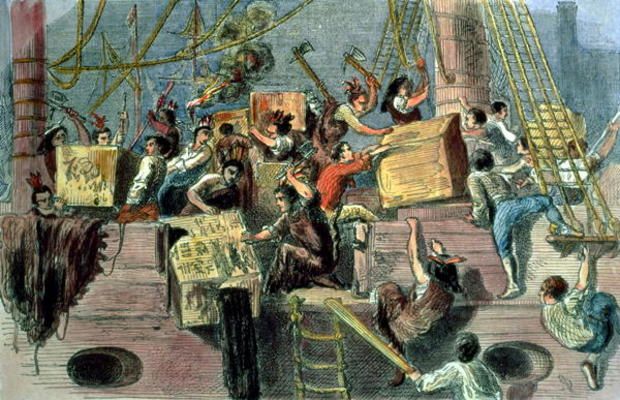 Loyalism and the north American colonist from the 1760’s may share some common ground. The colonists of North America had no way of influencing the laws and policy being produced by London as they had no direct political representation in Parliament. Fuelling the middle-class American frustration was the view that Parliament would only favour policies which lined its own pockets at American expense. Legislation such as the Sugar Act 1764, Currency Act 1764 and Stamp Act 1765, had provided the evidence needed to confirm colonial fears that Parliament was indeed acting in its own interest, giving British companies the advantage over colonial ones.

With no political representation and George III’s determined conviction that America should be brought to heal (by force if necessary), the thirteen colonies were left with little alternative but to protest. The colonies formed a Continental Congress  (excluding Georgia which eventually sent a delegation to the second Continental Congress),  raised a continental army and eventually declared their independence from Britain on the 4 July 1776.

The colonists viewed themselves as Englishmen, Irishmen and Scotsmen and before 1776 did not wish to part company with their mother countries but rather secure their rights as British subjects.

Much like the colonists, modern day Loyalists have turned from peaceful protests to violence.  With the tension building on the streets between British troops and the colonists it was only a matter of time before violence erupted. This occurred on April 19th 1775 at a place called Lexington, where British Regiments and Colonial Militia’s opened fire on each other.  To this day it is unknown who fired the first shot, but that shot was heard around world and would change the course of British history.

The thirteen colonies would eventually gain their independence from Britain and take the ideas of the 1688 revolution to the next step, building a new form of government and developing the idea of   citizens’ rights. However the colonists of 1770s differ greatly from today’s Loyalists, their fear for their British rights was a reality. They had no directly elected representation in their Parliament because British law did not permit it.

Finally the British subjects in America would not have understood how disrupting the businesses within their own community would have strengthened their position against the government. They primarily focussed on targeting businesses which profited Britain, such as the East India Company in an event known as the ‘Boston Tea Party’

Loyalism continues to see itself as under siege and has entrenched itself on the battleground of British identity. The Union flag protestors viewed the change in Belfast City Council’s flag policy as the final straw in a continual retreat in which their British identity is being chipped away. This current campaign has no strategy or tangible objectives by which they can aim to achieve or measure their success. This is partly due to the lack of experienced leaders and the differing views held within the Loyalism. If you asked a Loyalist flag protestor in East Belfast about the aims of the protest, and compared them to the protestor in Carrick it is highly unlikely they would be singing from the same hymn sheet.  On the other hand if you asked a regiment in the American Continental Army why they joined and what motivated them, they would state to gain independence. Without a solid goal which can be clearly articulated, understood and measured, motivation within the ranks of flag protests ranks will decline. This will give Unionist parties the opportunity to restore the status quo, by absorbing those disaffected by the lack of progress within flag protest campaign.

In short, there are similarities between those within Loyalism and the aforementioned American Continental Army – they both at one time valued their British Identity. Sadly it stops there as our American forefathers adapted to the new political realities.

Present day Loyalism has failed to do so and in doing so, create a further divide between themselves and Unionists. (It is strange that Unionists deliberately do not call themselves Loyalists for fear of being associated with the working classes and their problems over identity). Indeed it could be argued that a snobbish attitude is taken by middle class Unionists towards their co-religionists who call themselves Loyalists – almost a white trash attitude. And therefore the comparison between our American cousins of yesteryear and our Loyalist brethren of today starts well with both keen to preserve their identity in the face of political change. Both even resorted to acts of violence and demonstration.

Our American cousins learned a lesson 200 years ago – when the political reality changes then you must change too. Loyalists protesting over flags in Belfast, over identity in Carrickfergus, over a non-existent peace dividend in Lisburn and any other grievance elsewhere should take note of this lesson from history.