You are at:Home»News & Current Affairs»Peter Robinson, St Kevin and the Blackbird
Social share:

Wherever I go people ask me “What’s going on?” I don’t need any elaboration. People are at a loss to know what is going on in the Northern Ireland Executive.

We have a society today where the so-called nouveau riche is the nouveau pauvre. It is a race to the bottom. Davy Patten for as long as I can remember enjoyed a first class reputation as a builder and businessman. He was a respected and reliable employer of tradesmen all over Northern Ireland. He has been wiped out. 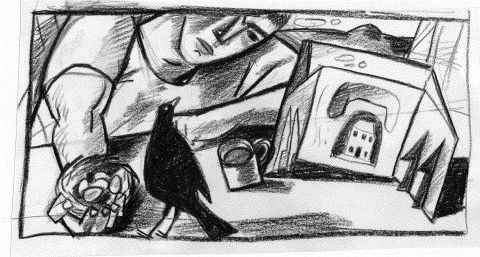 How much money has this Executive wasted on consultants and business plans on cul de sac ventures like the Maze multi stadia projects, which ultimately perished on the rock of pure narrow party politics?

Why is this Executive obsessing about autonomous Ministerial decisions?

Ministers are tasked to make decisions.

The biggest cancer within our society remains sectarianism. Why have we an Executive, which will not grasp this nettle and deal with it?

I have gone through the November draft of the so-called CSI report. Why is Unionism so reluctant to address flags, parades and the past?

This draft paper has been so diminished at the end of over four years work given that the Alliance Party washed its hands of it over six months ago and walked away from the committee working on it.

The Alliance has since published a much more adventurous version of the November draft CSI document.

Peter Robinson’s instinct is to publish the CSI draft report as it obtains. Many of those already accessed to it are unimpressed because it simply lacks cojones and fails to grapple with the big legacy issues in a meaningful way.

I pointed out on this website at another point that the leading authority in this land on the regeneration of broken fractured societies, Professor Richard Harrison of Queen’s University was not consulted on the way forward.

This is an expert who has looked at parallel situations to ours around the world and who is consulted by governments on regeneration. Our shamans/shaman ‘onthehill’ are so worldly knowledgeable that they didn’t find it necessary to listen to Professor Harrison.

David Cameron is not at all too pleased at the inability of the Executive to sort out our legacy matters.

The NIO, in a switch in policy and emphasis wants to raise the profile of Northern Ireland on the world stage. The current Chief Executive wants to focus on G8s, and good news emanating from this outback.

Instead, an image most foul of Loyalists thrashing police officers has been flashing around the globe.  “Unclean” cries Julian King, Theresa Villiers man in the NIO. He who loves royal visits, PMs and foreign dignitaries wants nothing to do with flags, parades and the past. “Je t’accuse” is Mr King’s riposte to those DUP Westminster MPs wanting to leave the flags row and accompanying violence at David Cameron’s door.

The new war cry in Unionism is ‘more police.’  It is not a new war cry – an old one warmed up. This means more spending on security on top of £15m already expended on policing the flags row – this before Ardoyne and the marching season starts again.

While this flag row rages – what do we get from Gerry Adams – a demand for a ‘border poll?’ What has happened to this man? How could he not realise such an issue in the current flags climate was dangerously provocative and insensitive?

How could he not realise that talk of a border poll right now fuels the raw loyalist paranoia obtaining since before Christmas?

David Cameron is not the only leader of an administration unimpressed with how the folk ‘onthehill’ have handled the flags dispute.

There are reports that wires out of Washington through the US Consulate have carried messages which have not been very glowing.

Peter Robinson has no trouble standing side by side with Martin McGuinness when McGuinness stares down dissident Republicans under threat but abdicates and refuses to stand with McGuinness to oppose Loyalist violence.

The First Minister takes the view it would not be helpful in his community to join forces with his deputy First Minister publicly to oppose Loyalist violence.

Peter Robinson is Northern Ireland’s First Minister. Society demands of him to represent all communities, not sectional self-serving interests.

The DUP chooses to dismiss the Jamie Brysons, the Willie Frazers of this world but many of their members stood shoulder to shoulder with them and loyalists taking to the streets particularly in Belfast even when violence against the police was breaking out all over the place.

A blind man on a galloping horse can see that Peter Robinson and his lieutenants are moving to the right. Where does all this sit with Peter Robinson’s talk of reaching out to Nationalists and Catholics?

Unlike St Kevin’s hand in Seamus Heaney’s ‘St Kevin and the Blackbird’ Peter Robinson’s outstretched hand to Catholics and Nationalists hasn’t been exposed long enough to the elements to suffer too much:

‘The saint is kneeling, arms stretched out, inside

His cell, but the cell is narrow, so

One turned-up palm is out the window, stiff

As a crossbeam, when a blackbird lands

and Lays in it and settles down to nest.

Kevin feels the warm eggs, the small breast, the tucked

Neat head and claws and, finding himself linked

Into the network of eternal life,

Is moved to pity: now he must hold his hand

Like a branch out in the sun and rain for weeks

Until the young are hatched and fledged and flown.’

Andy Warhol said: “It does not matter how slowly you go so long as you do not stop.” Peter Robinson must not stop reaching out.

He should ignore those henchmen telling him the DUP has smashed the Alliance Party on the flags issue.

He should remember the DUP slogan “Smash Sinn Féin” which he probably authored.

He should observe where that took him and his party.