‘Rule of law’ was a hallmark of the multi-party negotiations in St Andrews in October 2006. Then, political unionism defined it as a precondition to the restoration of power-sharing. Now, the last 13 weeks shows expediency by political unionism to rule of law.

For everyone, the rule of law is a defining feature of the justice and policing system. When it is not enforced confidence in the administration of justice and the policing service is inevitably undermined. That is the source of the latest policing fiasco: the PSNI has routinely chosen not to enforce the rule of law. 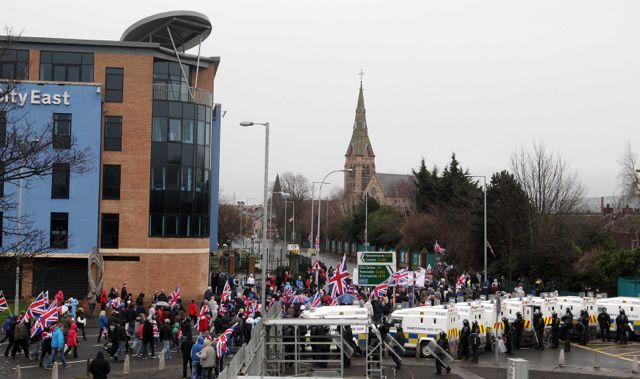 Loyalist protesters at the bottom of the Lower Newtownards Road as they make their way back to east Belfast past the Nationalist Short Strand.

So what is the law on recent protest marches? Anyone organising or participating in a parade or protest march which has not been legally notified and authorised is breaking the law. This is explicit in the Public Processions Act 1998. That is not just the assessment of Sinn Féin: it’s also the verdict of the Parades Commission. Commission chairperson Peter Osborne has now publicly declared “the law is very clear”.

Instead, the PSNI has been handcuffing its own officers by claiming to the Policing Board “there’s no such thing as illegal parades”. Even after the Parades Commission’s incisive clarity, Mr Baggot refuses to describe the protest marches as “illegal”.

How and why is the police service a facilitator for flouting the law? The clue is in comments and actions of the PSNI itself.

In early December 2012, hundreds of masked loyalists were permitted to march into Belfast and break into City Hall. Under questioning by the Policing Board, the PSNI claimed its response was designed to avoid “2 days of riots”. The fact that the following days saw violent attacks against police officers and nationalist residents did not prompt the PSNI to question its own assessment. But it did concern Policing Board members.

Since then, the PSNI public relations strategy has changed gears more often than shamed cyclist Lance Armstrong. The coherence with which the PSNI articulated policing primacy against plans for the British National Crime Agency has been lost. The police cannot pedal in two directions at once.

For instance, the PSNI said those behind the street disorder had no strategy. Then, in contradiction of itself, the PSNI forecast potential escalations in the disorder. The PSNI Chief Constable told a Westminster committee in January 2013:

“Had we been over-zealous and just gone and tried to move people off the roads… we might have ended up with 10,000, 20,000 or even more on the streets”

He neglected to present evidence to substantiate the claims.

More mathematical mythology was used by Belfast PSNI Chief Will Kerr when he said: “The 15 people blocking the road might be supported by 1,500 if policing was seen to be too robust”

Statisticians might enjoy such theories but they don’t belong in  human-rights-proofed, evidence-based, community-policing.

By being “too robust”, presumably the PSNI is referring to its duty to clear the public highway of illegal blockades. Surely effective policing does not always, if at all, require robust policing. Moreover, this PSNI comment raises a fundamental question of whether all people – and all roads – are policed with equal treatment. If 15 people are blocking a road in Ardoyne will the PSNI apply the same approach to that situation ?

This week, a republican will appear on trial for participating in an illegal protest march in Lurgan. Sinn Féin’s position is that all marches should be properly authorised and fairly policed. But for many people, this court hearing will be testament to the differential approach of the PSNI to republicans and nationalists  Especially against the backdrop of 3 months of loyalist protests where only 2 people were arrested by the PSNI for participating in illegal marches. This is indicative of differential policing.

Despite ample, and regular evidence of sectarian intimidation and incitement to hatred, the PSNI has studiously avoided describing these activities as “sectarian” or “hate crime”. Details of how many people have been arrested for sectarian offences have been requested by Sinn Féin for the next Policing Board.

The PSNI’s ambivalence to sectarian intimidation was most graphically revealed when Matt Baggot cited the Holy Cross dispute in 2001 as the guide to their decisions. There could not be a worse example of policing protests. Holy Cross primary school was the target of a protracted sectarian campaign. Schoolchildren were confronted on their way to school by overt sectarian intimidation and physical abuse. The PSNI chose to police the children to school rather than disperse the protestors. 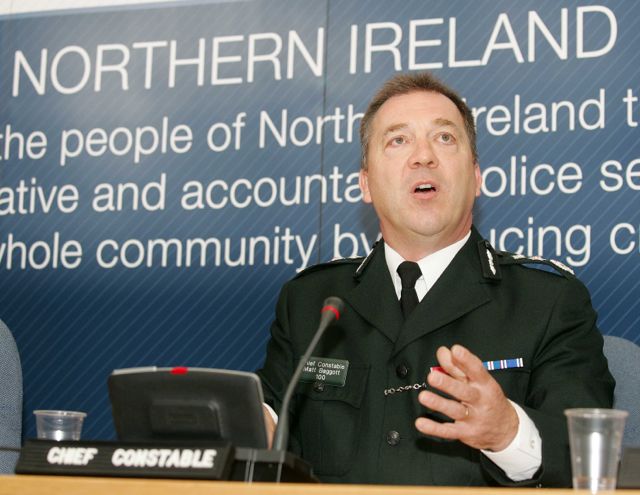 The weekly illegal sectarian march past the Short Strand is not the same as schoolchildren and parents walking to school. The PSNI Chief Constable needs to explain face to face with the residents in Short Strand why police subvert their rights. In unison with local Cllr Niall O Donghaile, I challenge him to do so.

The default position of the PSNI throughout the last troubled time has been to claim that public safety comes first. It claims that Article 2 of the European Convention of Human Rights takes precedence over all other police decisions. The problem is this commitment is open to question. For the implication is that if the PSNI act to prevent illegal sectarian protest marches someone’s life would be endangered. Of all the questions arising from the PSNI’s present strategy, this one is the most serious. The PSNI has met with the organisers of this disorder on several occasions. So if someone is threatening to take life because the PSNI acts to prevent the protests and blockades, then the PSNI must know who is behind these threats. In addition, the PSNI must show it is willing to take action against this threat. Otherwise, invoking Article 2 is a cynical ploy.

All of which brings us to the coming summer and the problem with the present policing paradigm. The PSNI absolves itself of wrong by referring to its strategy of facilitating illegal, sectarian loyalist marches as the “least worst option”. Some senior PSNI officers talk as though this was 15 years ago. Back then, the phrase “least worst outcome” became synonymous with a notorious and disastrous piece of policy making.The rhetoric of the “least worst outcome” was the excuse for using the RUC to physically force Orangemen down the Garvaghy Road. (source : http://cain.ulst.ac.uk/issues/parade/docs/nio20697.htm)

Much has changed since then. It’s 2013, not 1997. The PSNI is not the political militia of the RUC. Those days are over, never to return. We have a peace accord which enshrines the right to equality of treatment, parity of esteem, and the right to live free from sectarian harassment. We have policing oversight and accountability through the Policing Board and the independent office of Police Ombudsman. We have powers transferred to help transform policing and justice. For the PSNI to become an effective public service for all citizens it must eschew old failed paradigms and act to embed peace. “Least worst outcomes” were never acceptable – we need policing to be the best it can be.