We’ve heard it time after time that social Media has been at the core of the Union flag unrest that began on December 3 2012.

Chief Constable, Matt Bagott has said that social media is “stoking” violence, community worker Jim Wilson said it has been driving unrest and the general media has been painting a picture of misuse and abuse.

So what’s the real picture?  What’s the real extent of social media in driving the Union flag unrest? Have the media and commentators been too quick to label social media as that which upholds and furthers all that is bad in Northern Ireland?

My feeling is that there is more to the question of social media and the Union flag issue than meets the eye.

In search of the answer to the question of what’s really happening in the online space in Northern Ireland I came to Dr Paul Reilly, lecturer in Media and Communication at the University of Leicester.

Paul has produced two fascinating papers on social media and the emergence of online interfaces, Anti-social networking in Northern Ireland (2010) and Community Worker Perspectives on the Use of New Media to Reconfigure Socio-Spatial Relations in Belfast (2011).

I had the good fortune to speak with Dr Reilly on Monday 18 February about social media and the Union flag disturbances and he told a story that is more complex than the one that meets the eye. 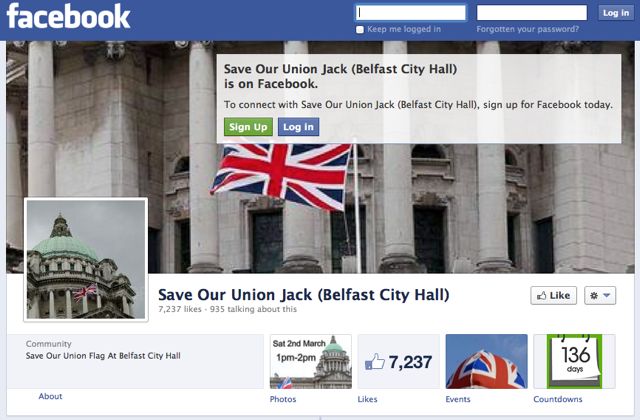 Brian Spencer: What role has social media played in the protests and riots following the BCC decision to restrict the flying of the Union flag over the city hall?

Paul Reilly: Social media has had a very important role to play. In particular through the use of lists and schedules used to plan protests and disorder; that has been a core aspect of the movement and has in fact accelerated it in many ways.

In Northern Ireland social media has given people a platform through which they can express solidarity and mobilise people to show solidarity – even to bringing people out onto the streets who would not normally do so. So it’s broadening the activist franchise.

BS: Where’s the activity happening? Is it just Facebook or is the action also on Twitter and Bebo?

All sorts of groups are migrating online, including community workers and protest groups. And it should be said that such groups appeared on Facebook long before the December 3 and were associated with other grievances such as Ardoyne.

Looking at the channels specifically, Facebook is the market leader in Northern Ireland. Emerging in 2008, it has shown and continues to show real staying power.

Twitter is different and more interesting in many ways. It’s being used predominantly, but not exclusively by the political classes.

PR: There’s been clear evidence of angry exchanges and sectarian trolling. Use of the word “taig” has come up when using search software and a number of pages have been created simply to poke fun and generate tensions.

However social media isn’t just a space for sectarianism, hatred and abuse.There are also those who go online with positive intentions. People who wish to articulate a genuine message of discontent.

Some of the administrators of these Facebook sites have shown a readiness to police and self-regulate these pages. We’ve seen incidents where administrators have said they will remove abusive comments. Like on the streets, most people wish to hold peaceful protest; and just as those who pick up a brick and engage in violence are in a minority, so too it is on social media.

It’s often the case that Facebook itself will send warnings to page administrators that inappropriate behaviour has gone on and such comments should be policed or removed.

BS: Has there been a commensurate rise in nationalist/republican activity online?

PR: Pages have sprung up to show support and solidarity, especially since January 16 2013. But it’s important to say that the catholic community had a broad social media presence before December 3 2012.

BS: You’ve been monitoring online social media activity very closely and have been collating data ahead of an academic paper. Can you share some of the figures you’ve recorded so far?

PR: Yes I’ve been collecting data since December 2012 and can share some data.

From mid-January to mid-February one Facebook page produced 18,000 posts.

Another page, the parody account ‘Loyalists Against Democracy’ from mid-January to February 18 hosted 34,129 messages.

Whilst this is a spoof account it demonstrates the ability of the flags issue to generate such social media activity.

For the same period, ‘Save our Union Flag’ hosted 16,203 communications.

However this wave of loyalist social media activityover shadows comparatively modest numbers from the nationalist side, where ‘Support the People of Short Strand’ hosted 1,571 messages.

BS: Have you any figures on Twitter usage in Northern Ireland?

PR: Yes I have figures which paint a very interesting picture.

On Twitter, #OperationStandStill generated 105 tweets in a set period.

This contrasts with #TakeBackTheCity, which in the same period saw 5,432 tweets; while #PositiveNI accounted for 1,826 tweets. On January 16 there was also a big #ShortStrand Twitter discussion.

The research has shown that Facebook has been key to the events and more significant than Twitter but Twitter has played a significant role nonetheless. I’m continuing my research but already these findings are interesting and tell us that social media misusers and abusers are by far in the minority. 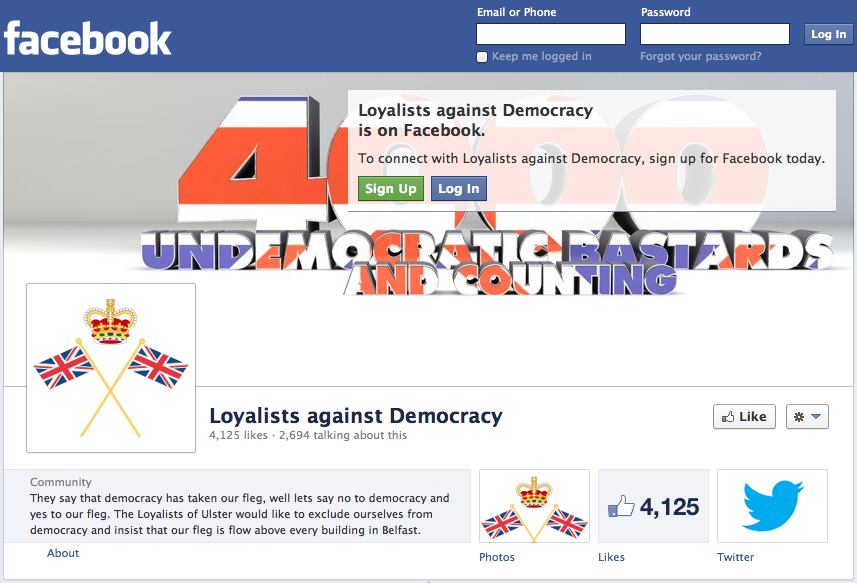 BS: How does the recent street violence compare with the London riots in August 2011?

PR: There are certain similarities and certainly there has been evidence of similar processes. In London we saw the rampant spread of rumours. This same trend has emerged in the recent unrest: suggestions that the PSNI have been heavy-handed, that a pensioner was beaten and other wild rumours that the Garda Síochána had been brought in to police the disturbances.

[Since the interview with Dr Paul Reilly, Deputy Chief Constable Judith Gillespie has said that the flag trouble cannot be compared to the London riots]

BS: Looking forward, what should authorities be doing? Do we need regulation or stiffer guidelines like in England and Wales? Or, do we need self-regulation and better information on social media dos and don’ts?

PR: From a legal perspective there is a gap, self-regulation doesn’t always work. Administrators are trying to self-regulate but the response has been mixed.

Certainly safety would be better served with stricter regulation but it would not address the causes of the rioting and unrest whether it be on the catholic or protestant side of the community. The dislocation and discontent are going to be with us whether social media is available or not. What we’ve been hearing online is a voice largely unheard since 1998.

The narratives seen on Facebook are Troubles related and it will be difficult to move forward as there is still no consensus on conflict transformation.

So if we didn’t have social media or if it was heavily restricted, these voices would just go underground. So in a sense, the misuse and abuse have revealed and underscored a real discontent that must be addressed.

BS: Should Northern Ireland adopt its own prosecution guidelines like those produced in England and Wales? Should AG John Larkin and DPP Barra McGrory QC be doing more to clear up the uncertainty?

PR: Yes there is definitely a need for bespoke guidance to be produced for Northern Ireland to cater for the specific issues and problems with which security forces need to deal. Until then Northern Ireland decision makers should ensure a standardisation with England and Wales which is the case at the moment.

BS: Is there an imperative to educate and inform young people and social media users in general in Northern Ireland?

PR: Yes certainly, the interim guidance produced so far should be brought into the public domain so that people know what can and can’t be said. We need a joined up response that informs people of the rules and sets out social norms. We don’t need an over-enthusiastic response but we need to move now to bring certainty and consistency into this growing area of life.

To conclude briefly: noise on the ground and from the press would suggest that social media is the new theatre of war in Northern Ireland. However, ostensibly this is not the case. Yes there has been misuse and abuse; but just like on the streets, these are minority incidents which pale in comparison to the well-intentioned masses.

As we go forward, decision makers should be mindful that the social media wrongdoers are in a minority and that engagement and welcoming them back into the process is the answer – not heavy handed or over-enthusiastic controls of prosecutions.

[Since this interview Dr Reilly has produced a blog entitled, Facebook didn’t start the flag riots]