You are at:Home»News & Current Affairs»Opinion»Does religion lead combatants into or away from violence?
Social share:

We hear a great deal about ex-combatants very little from them; and nothing at all about their engagement with religion. Northern Ireland’s ex-combatants provoke little public sympathy and the idea that some were religious may be hard to believe for their co-religionists, but in Ex-Combatants, Religion and Peace in Northern Ireland (Palgrave, 2013), John Brewer, David Mitchell and Gerard Leavey allow ex-combatants to speak for themselves about their faith and its role, or not, in their decision to move from a military to a political strategy.

They show that religion was not felt as a burden pushing them toward or, more significantly, away from political violence. The effect of their faith was mostly ambivalent. For example, on the credit side Brewer, Mitchell and Leavey argued that religion is one source of mental wellbeing for ex-combatants in that it helps deal with issues of guilt and gives hope. It is also a source of social wellbeing in that it is an enabler of reconciliation, forgiveness and empathy. It served as a coping mechanism inside prison (and no doubt outside). On the debit side, particular forms of religion are barriers to forgiveness, and to the irreligious it can be an irrelevance at best and a malign and negative force at worst. In a setting of conflict and division, for example, religion can help construct antagonistic identities, which is difficult for less pernicious forms of religion to undercut. 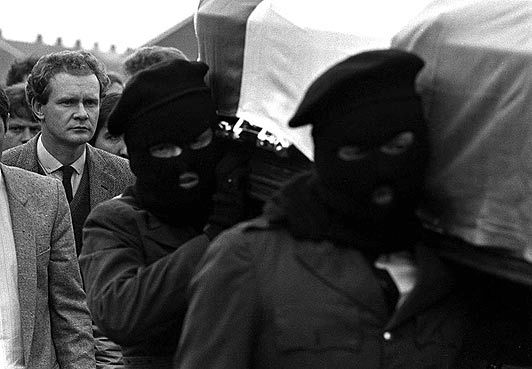 Of course, most people facing the same social structural and political context did not resort to armed struggle and it can be difficult for the public to empathise with the problems that choice now causes ex-combatants. Brewer, Mitchell and Leavey argue, however, most ex-combatants negotiate a path between post-traumatic stress, addiction, religious over-guilt and being blasé about the past. Neither the churches nor their former paramilitary organisations help them find a way through these tensions. Nonchalance about the past certainly avoids ex-combatants having to confront the legacy of armed struggle but tends to perpetuate political stereotypes of the ‘other’ that are unhelpful for future political compromise, and religious over-guilt is counterproductive by imposing a standardised and particularly severe test of redemption that it is impossible for people attain.  So some ex-combatants are unable to discuss the past, or withdraw into stress and addiction, or busy themselves with forms of atonement that involve a powerful presence in community work and peace and reconciliation work, all of which disguise the need for ex-combatants, like all victims, to come to terms with the legacy of the past, leave it behind, and move on to the future.

This is at once commonplace and controversial – it is so obvious that it is surprising it has not been done before.  Northern Ireland is an extremely religious society, and religion forms part of political history and identity on the Island of Ireland, so it would be unusual for ex-combatants not to engage with religion. However, the human rights tradition through which ex-combatant issues are normally approached, neglects religion. Religion is seen as both outside the domain of human rights and, indeed, part of the problem that causes human rights abuses in the first place. The authors challenge this perspective by addressing ex-combatants’ views on religion and the uses to which they put religion both during their combatant experiences and afterwards in the post-conflict phase.

That combatants had religious belief may provoke disbelief amongst ordinary people. Some may appropriate what ex-combatants say in ways that confirm their every prejudice about people of the ‘other religion’, or consider what they say as incredulous for people with the same religious convictions as themselves. However, people need to step outside their prejudices and suspend their incredulity and hear what ex-combatants are trying to say about the role of faith in their decisions to take up arms and then desist.

And what is it that they say? The authors show that some ex-combatants had personal faith, and some saw in a cultural religious mythology, weak justifications for violence, but none experienced their faith or the institutional churches to which they either devoutly or nominally belonged, as an encouragement to their choice of violence; nor an encouragement in their transition to non-violence. The first might be construed as the institutional churches’ greatest success in Northern Ireland, the second their greatest weakness.