You are at:Home»News & Current Affairs»Where does the flag protest go from here?
Social share:

Is this going to be east Belfast’s winter of discontent?

It is not insignificant that east Belfast is the epicentre of the Union Flag protest.

The leaflet at the heart of the Unionist protest over moving to designated days for flying the Union flag on Belfast City Hall, was aimed at Alliance deputy leader, Naomi Long MP.

Furthermore there is a UVF satellite in east Belfast, some members of which have been involved in the disorder on the streets.

Chief Constable Matt Baggott was unambiguous on this. He said “some members of the UVF in East Belfast as individuals have been increasingly orchestrating some of this violence.” 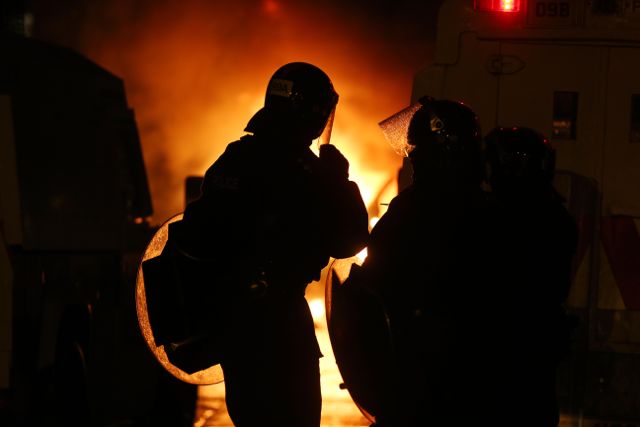 A car burns in the Castlereagh Street of east Belfast this evening following a loyalist protest.

The leader of the Progressive Unionist Party Billy Hutchinson has appealed to those UVF members to walk away from violent protest and he has asked to them to join the quiet ‘revolution’ on the streets of east Belfast.

As stated above the east Belfast UVF is a satellite of the mainstream Ulster Volunteer Force.

Naomi Long’s office has been a magnet for angry protesters in the East of the city for weeks. Is this an accident? No.

She won that Westminster seat from First Minister Peter Robinson who sadly found himself in a domestic crisis, side by side with attending difficulties.

The DUP intention is to unseat the Alliance Party MP come the next Westminster election.

Naomi Long appears to be growing in stature by the day on the airwaves but will the flag protest militate against her potential for retaining her Westminster seat? Who knows?

There are those who will now vote for her and those who regret having voted for her.

Making her the target of the ‘flag protest poster’ was blatant in the sense that she is not a Belfast City Hall councillor but was deliberately placed on the dart board of convenience by the DUP and the Ulster Unionist Party because her party went part of the Sinn Féin road in proposing the flying of the Union flag on designated days.

Initially the flag protest was fine as long as it remained peaceful.

Bringing people out onto any street is always risky, however noble one’s cause is, and working class Protestants are claiming to have been abandoned and neglected educationally, socially and economically.

Alex.Kane has pointed out on eamonnmallie.com nothing has changed. He contends it was always the same with ‘big house Unionism.’

The flag protest has ended up in the wrong terminus.

The police with whom Protestantism and Unionism historically identified are now being nightly subjected to waves of missiles, petrol bombs, masonry, smoke bombs etc cascading down on them.

Sporadic outbursts of stone throwing by Nationalists from the Short Strand on the Newtownards Road only serves to exacerbate the situation.

Danny Kennedy, Minister for Regional Development paints an unsettling picture “the politicians have lost control. There is a lawlessness element on the streets.

“Twenty years ago if the two Unionist party leaders made a statement asking Loyalists to stay off the streets it would be obeyed.

“It’s a worrying fact. It’s a new fact in Unionism and Loyalism that that doesn’t happen – there is that constituency which says things have gone too far and nobody is standing up for what we stand for.”

Former Ulster Unionist Party leader Reg Empey is very pessimistic right now “I have never seen it worse. It is not about flags. That was the lightning conductor – there are the inquiries, Bloody Sunday killings being re-opened, Finucane, and the rôle of the Historical Enquiries Team worrying some people.”

“We have a toxic cocktail” said Mr Empey.

Asked if the Unionist Forum is the panacea to address loyalist concerns Reg Empey added:

“There is no point having a Forum unless you can deliver out of it. A lot of the things are not deliverable.”

An attack on a police car outside Naomi Long’s office in east Belfast some weeks ago scared the horses at leadership level in mainstream Unionism. 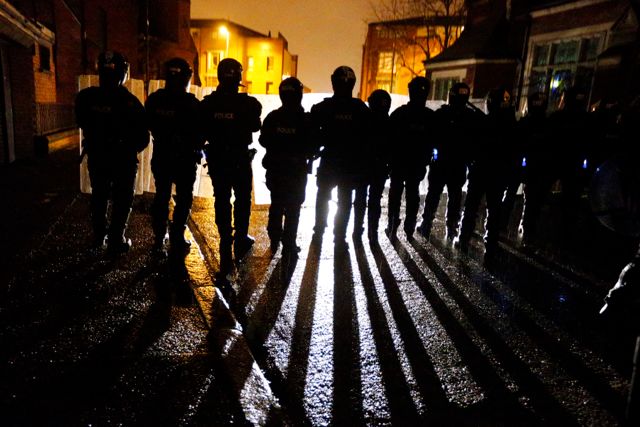 Having backed the Union flag protest and having directed their anger at the Alliance Party, Peter Robinson and Michael Nesbitt, knowing the genie was out of the bottle, couldn’t put it back.

They respectively found their own Assembly members defying them to take part in nightly flag protests.

They moved to do what all administrations do when blindsided – they announced they would set up a Unionist Forum to facilitate those feeling alienated and holding any grievance against the current political edifice/régime at Parliament Buildings.

It has been down hill all the way since then for Robinson and Nesbitt.

They are at a loss as to what to do.

The protesters’ loose alliance, ‘The Ulster People’s Forum’ has snubbed the leadership of mainstream Unionism so far. That could change.

A senior DUP source holds to this view about the Loyalist flag protest:

“People want to draw a line in the sand. There are people who are fed up with the endless concessions to Sinn Féin and who want to see some confidence being built in the Unionist community.”

All of this places Peter Robinson and Mike Nesbitt, the two leaders of mainstream Unionism in an invidious position.

Inertia obtains at the same time as a chasm has opened up in the Executive on the back of the flag row with SDLP, Alliance and Sinn Fein ministers leaving the floor to the DUP and Ulster Unionists.

In the words of Reg Empey “the tectonic plates of five/six weeks ago in the Executive have shifted.”