You are at:Home»News & Current Affairs»The Elephant in the Peace Process by Dave Magee.
Social share:

The elephant in the peace process has been mostly ignored, largely maligned, and often misunderstood.  It’s time to talk about Loyalist masculinity.

In her book The Will To Change, the African-American feminist ‘bell hooks’ argues that if we take away the privileges that patriarchy has given men then we would find that they are suffering just as much as women.  In the case of Loyalism, patriarchal masculinity has left Loyalist men brutalised and suffering, with nowhere to go. 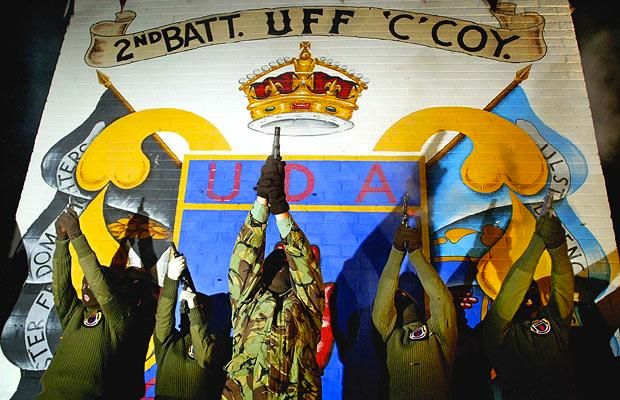 The dominant form of Ulster Loyalism that emerged during the period of ‘the troubles’ was defined by heavily militarised notions of masculinity.  In many areas men were often willing to take up arms, of one sort or another.  For some this meant joining the British army, for others this meant joining Loyalist paramilitary organisations.  In the same way that young men are told that the army will turn them into ‘real men’, so too ‘real men’ joined the ranks of paramilitary organisations.  A UVF ex-prisoner told me:

‘Men in this area would still, always down through the history of this area…always want to be in the army of some sort.’

On the walls of public housing estates and inner-cities, the figure of the Loyalist ‘warrior’ became immortalised.  A UDA ex-prisoner recalled:

Young men growing up in Loyalist areas often had to deal with the triple effects of poverty, an education system which rendered many of them second class by the age of eleven, and the wider effects of deindustrialisation and the loss of jobs.  In this context paramilitary organisations provided many men with a story that gave them both meaning and status that was difficult to attain elsewhere.  The UDA ex-prisoner summed up his attitude towards education growing up:

It was while conducting a focus group with Loyalist women that I first became aware of the deep suffering of Loyalist men as a result of patriarchal masculinity.  When asked about men and their emotions, one woman replied:

‘I look at some people now and I think they’re dead behind the eyes.’

Others added that many Loyalist men were:

Later, a UDA ex-prisoner described to me how this process took place:

One ex-UVF prisoner described how this took its toll on family life:

‘If you harden your heart, well that’s gonna be hardened towards your relationships and other areas, whether it be your wife, your kids or even the way you talk and treat your friends, you know. In them days you didn’t wanna show sign of weakness.  Everybody was fucking John Wayne.’

Loyalist patriarchal masculinity has claimed more victims than most of us want to admit.  It crushed the souls of those who managed to make it out alive and exiled them to a land of emotional disconnection.  More than one Loyalist ex-prisoner has told me they are afraid to sleep because they might wake up screaming in the night.  It is common to hear stories of Loyalist men, decades after their involvement in the conflict, dealing with alcoholism, drug addiction, and other mental health issues.  Others, unable to cope at all, have taken their own lives.

Some might argue that these men chose their own path and now they have to deal with the consequences.  Some might say they deserve what they get.  Many people are so enraged by the suffering caused by Loyalist men that they refuse to acknowledge that Loyalist men have also suffered.  And yet, if we are to all move forward together towards a shared future for everyone, we can not afford to ignore the elephant in the peace process.  Acknowledging the suffering of Loyalist men might provide a point of connection that ultimately leads to transformation of Loyalist masculinity.