You are at:Home»News & Current Affairs»Opinion»Loyalist paramilitaries must not be scapegoated by British government in addressing past
Social share:

There has been much hurt visited on all sides. Republicans, the state and loyalists have all inflicted atrocities and were equally the victims of atrocities. As a result there are entrenched views and hardened hearts and despite the peace process for some these have not lessened. That is understandable.

There is an unresolved and a deep lingering hurt beyond the gun-smoke and rubble that is rarely away from our television screens, radios and papers which exists within communities and families right across our entire society. There is the need for a truth commission and hopefully a deeper meaning of reconciliation based upon truth and understanding. There is a need for healing. 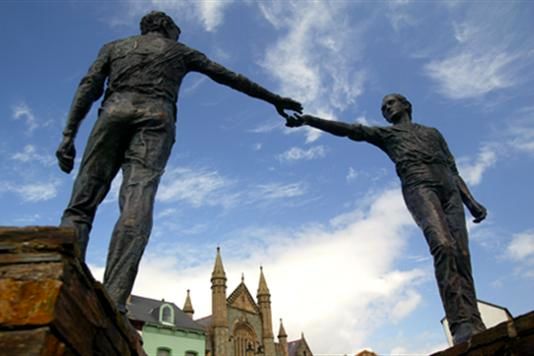 Gunfire has stopped but we are not always hearing one another. I believe that the silent majority of those bereaved and injured want such a process as they want answers from all sides. They are a constituency who know the real effects of conflict and also believe passionately that in addressing the past that it will also demonstrate the awful human impact of loss and thus hopefully convince people that we must at all times find alternatives to conflict and violence. It is their legacy lest we forget.

The proposals by Bradley/Eames were the best option so far. The political failure to address the past is impacting on the present and in danger of refueling the engine of hatred, sectarianism and most of all conflict. If we don’t secure a process to address the past then this will grow.

Sinn Féin has made reconciliation a priority and they are right to focus on the relationships that exist here with unionists and loyalists. Truth about the past from republicans must also be part of this process. For the victims of state violence and collusion there must also be a fixed focus on the British government and their responsibilities and obligations as part of truth and reconciliation. Whilst loyalists must be part of any process too it would also be wrong for them to have to alone burden the responsibility on the part of their community or be scapegoated by the British government and mainstream unionism. Loyalists need to also understand that the focus of those they hurt is not always on them but rather on those who hid behind them. The focus for truth is often only about the actual policy and of organizational and governmental accountability and not so much about individuals. It is also about institutions, political parties, churches etc. and context.

The current crisis within the UVF concerning arrests by the PSNI’s C2 is a separate matter that has been confused with a process of transitional justice and truth recovery. It is about people within that organization who have turned evidence and implicated others in a controversial supergrass style system. It is precisely because there is no structured transitional justice process to address the past that this has arisen.

More concerns exist within the nationalist community about the PSNI and HET given their role in continuing the practice of extending impunity to state forces after so-called ‘reviews’ of cases where that evidence would normally warrant referrals for prosecution. This has been heightened by the reintroduction of 1,071 former RUC, including former Special Branch now tasked with managing information about state killings and collusion. The HET are the only people who refuse to say that collusion took place and that is political. There have been few arrests and fewer prosecutions. But the threat of prosecution is negligible given the political management by the PSNI and HET. Without independence there will always be political arrests and prosecutions. A process to address the past could counteract the view that some are being scapegoated while handlers and others evade culpability.

The reality is that we are hearing cries for truth and accountability not collectively but oftentimes in response to each other. We need quiet spaces, collective focus and dialogue at a grassroots level about what we each mean.

Reconciliation has been talked about constantly in recent weeks. Reconciliation is the product of truth, knowing and understanding. Addressing the past is the process from which reconciliation will follow not the other way around. We believe we need a truth commission. How that is understood and potentially shaped will be assisted by dialogue. It could be non-retributive and non-punitive. Dialogue must involve victims and survivors and those who caused the harms. Facilitating dialogue should be independent, as should any emergent truth process. But we need meaningful conversations.

For us the UN Special Rapporteur on Truth, Justice, Reparations and Guarantees of Non-Recurrence, Pablo De Greiff, could play a pivotal role and we again make a call to both governments to invite him here to assess, assist and advise.

There are serious misconceptions within unionism and loyalism concerning the past. Some of this is out of ignorance and a genuine fear of uncertainty. Some is instinctively sectarian and fuelled by disingenuous political leaders that falsely preach doom concerning advances towards equality, human rights, justice and democracy.

A concerted political campaign of attacking families seeking truth and justice exists. This campaign too includes the promotion of state forces to the conflict and the awarding of financial ‘gratuity’ payments from public money to them above all other victims and survivors from across the community.

In the context of the debate around the past we need to set the record straight as to the perceived one-way process that somehow ‘benefits’ nationalists and republicans.

There have been six inquiries into controversial incidents that claimed lives. Three of these have focused on killings that unionists raised. The killing of two RUC officers, and the killing of Justice Gibson and his wife by the IRA, and the killing of Billy Wright. Nationalists and republicans have supported all of these inquiries. There have been three inquiries into killings that have occurred which nationalists and republicans also called for. Inquiries into Bloody Sunday, Rosemary Nelson and Robert Hamill have taken place amidst concerted establishment efforts, including from unionism, to prevent, frustrate and undermine. There has been no inquiry into the killing of Pat Finucane.

In the absence of a truth commission all democrats interested in peace and justice should support the call for investigation, inquiries and truth about the past concerning all deaths where the issues of truth and justice have not been established and importantly where families seek such inquiry. It should not be sectarianised and falsely represented. To do so merely exposes a hidden agenda, which is to shield the truth about terrible events and to protect those individuals, organizations and institutions responsible. The longer this continues the longer there will be division. The politics of fear is taking all us nowhere.

Truth and human rights should threaten no one claiming to be a democrat and to want to move this society forward. The reality is that the promotion of myths, misconceptions, propaganda and lies are the enemies of truth, justice and democracy that if not addressed will sew the seeds for future conflict. These are the choices.

What is not understandable or excusable is the type of leadership that manipulates the hurt of the past to suit its political agendas – namely to prevent any examination of the past.

If unionists and loyalists really want to raise the hurts endured from republican actions then the challenge is for them to engage in dialogue on how a process can be designed to deliver to everyone.