You are at:Home»News & Current Affairs»Establishing trust is necessary for moving beyond protests and violence
Social share:

That loyalists continue to protest at the decision to remove the Union flag from Belfast City Hall is unfortunate, but not surprising. At risk of sounding like some sort of revanchist throw-back, it was a fuse looking for a spark. I, like other dispassionate analysts of the ‘peace process’, have repeatedly warned that there has been a general malaise about confronting and debating outstanding issues, such as the real meaning of reconciliation between unionists and nationalists, ‘dealing with the past’, and the development of an underclass, particularly in Protestant working class areas. 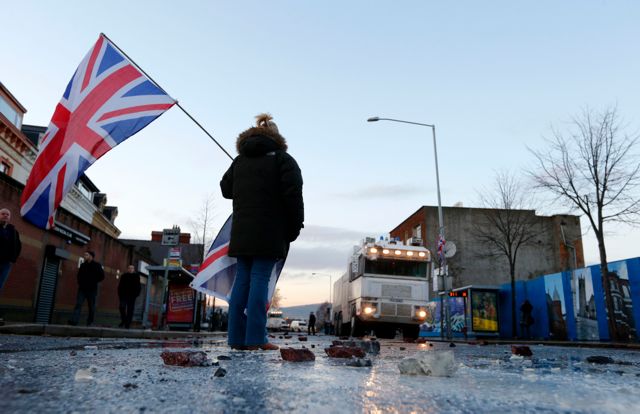 A protestor on Castlereagh Street.

The failure to face up to the imperfect realities of the ‘peace process’ has undoubtedly stoked the flames of frustration, anger and suspicion in marginalised communities and continues to act as an accelerant on an open fire of disenfranchisement, sectarianism and violence.

Yet, one must ask the question: why was nothing done to prevent such a destructive turn of events? Why do loyalists, in particular, feel out of sorts with the ‘peace process’ in this ‘New Northern Ireland’?

One plausible explanation has come from Billy Hutchinson and the PUP, who maintain that this is a natural consequence of republicans acting outside both the spirit and the letter of the 1998 Good Friday Agreement. Hutchinson sees the flags protest as a by-product of ‘people’s frustrations that Sinn Fein are allowed to carry out a “Brits Out” campaign in Northern Ireland’.

But is it really a surprise that Sinn Fein has been pursuing a policy of ‘de-Britification’ in Northern Ireland?

The evidence for their political campaign is certainly there for those who care to look for it.

For instance, the end of the Provisional IRA’s armed campaign in 2005 may have seemed like a magnanimous gesture, but it did not lessen the group’s determination to continue their struggle for Irish unity in another, political form.

In a statement released in 2007, which backed Sinn Fein’s position on policing, the Provos stated that ‘Irish republicanism is stronger, more united and more confident than at any time since partition and that we can achieve an end to the partition of our country and the establishment of a free and independent Ireland’.

Though by now signed up to ‘purely peaceful and democratic means’, republicans remained unbowed in their zealous commitment to realise their objectives at the expense of all else, including reconciliation with their unionist counterparts. Ostensibly, they were simply reaffirming the self-appointed goals of those who signed the proclamation of 1916, as well as those who formed the First Dail in 1918, by reassuring supporters that they could deliver on promises by way of the new political dispensation in Northern Ireland. With the ‘dissidents’ carping from the side-lines, Sinn Fein soon found its room for manoeuvre even further restricted; they had become prisoners of their own rhetoric.

So, where’s the problem, I hear you ask? Surely loyalists were smart enough to understand where republicans were coming from?

Well, the problem lies in the confusing narrative continually trumpeted by Sinn Fein (and their awkward partners in the DUP) since 2007, which claims to be moving everyone towards a ‘shared future’. It is a narrative that is attracting an ever-more hollow ring to it, especially given the evidence to the contrary that appears to be emerging on a nightly basis in Belfast, not to mention the failed attempts to publish the blueprint for the Cohesion, Sharing and Integration (CSI) ‘strategy’.

As more and more people are beginning to suspect, rather than advancing towards a ‘shared future’, where tolerance for diversity flourishes, we seem to be destined to repeat the mistakes of the past. And for those familiar with George Santayana’s oft-quoted aphorism, “those who forget the past are condemned to repeat it”, these words seem to be an apt description for the crisis unfolding on the streets.

In reality, as some critics have argued, we are moving headlong into something akin to ‘benign apartheid’, wherein both communities agree to disagree on constitutional issues and simply tolerate each other. As an experienced conflict mediator in Derry/Londonderry once confided in me a few years ago, ‘it’s not a “shared future”; it’s just plain co-existence’!

That is not to deny that individual Sinn Fein activists have engaged in community relations work. Some activists have worked with loyalists at the grassroots, addressing interface issues and promoting the work of ex-prisoner groups, but this is in danger of being drowned out by the forward march of ‘zero-sum’ ethnic politics.

The other tragedy in all of this is that Provisional republicans have been able to make their political agenda totally indivisible with the forward march of the ‘peace process’. Anyone who dares to criticise it, consequently, is labelled a ‘drug pusher’, ‘mentally ill’, or, simply, and perhaps most conveniently of all, a ‘sectarian bigot’. No attempt is made to try and understand the ‘non-criminal’, identity, issues behind the protests, or, for that matter, the violence that has followed suit.

It is little wonder that loyalism finds itself in a perpetual crisis.

On the one hand, we have a community that sees itself as having advanced its objectives, while on the other hand we have another that perceives itself to have ‘lost out’ and, lacking in clear political leadership, finds itself forced to take to the streets in an even more regressive way. 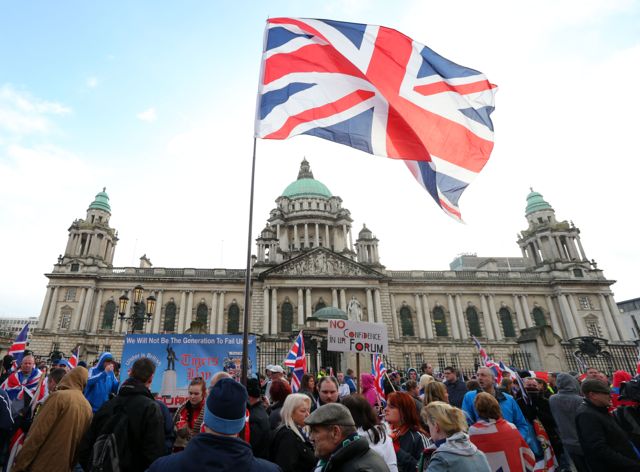 Loyalists at the protest at Belfast City Hall

As we have seen from media coverage, the unfortunate net result is that Northern Ireland does not look like it is at peace – a travesty considering that we are almost 20 years on from the paramilitary ceasefires.

As people in this part of the world know only too well, peace is a highly politicised concept that has to be constantly negotiated and re-negotiated between ardent opponents to make it stick.

In divided societies across the world, particularly those ravaged by armed conflict, ‘peace processes’ are an unhappy equilibrium that must be constantly maintained so as to avoid slippage back into war.

In the end, the Agreement only served to copper-fasten a compromise that could enable all parties in conflict to draw back from the brink honourably. The fine details on how to move on to the next phase of reconciling ideological differences for the benefit of all the people of these islands were left to posterity.

Many thought that the billions of pounds invested in the ‘peace process industry’ by the British and Irish governments – not to mention multiple donors in the United States and Europe – would help build our ‘new Jerusalem’.  They were wrong.

Indeed, it is difficult to comprehend how successful the throwing of money at the problem has actually been. So-called peace-walls are increasing in number, sectarianism is rampant and the parties to the conflict cannot even agree on a shared view of the past; or, as the flag vote shows, on the present.

So what? What is the sum total of this bleak assessment?

Well, it is clear that Northern Ireland will continue to remain divided, with little prospect of meaningful reconciliation, unless political representatives are honest about where they are leading their voters and supporters. They must reaffirm their commitment to accommodate one another in a way that fosters mutual respect and, above all, shows an understanding of the ‘other view’.

In other words, until trust is established at all levels of society, on all sides of this conflict, from the grassroots upwards, it is unlikely that a ‘shared future’ will ever be realised in Northern Ireland.

Building and rebuilding trust within and between communities, therefore, is what is required.