You are at:Home»News & Current Affairs»Opinion»“The working class can kiss my ass”
Social share:

All that can be said with any degree of certainty is that the ongoing protests (supposedly about restrictions on the flying of the Union Flag at Belfast’s City Hall) are being carefully orchestrated. What isn’t so certain is—by whom: and for what specific purpose?

No amount of bricks thrown or roads blocked is going to change the flags policy; and no level of intimidation or arson is going to force Alliance to rethink their position, re-table the motion and reverse their decision of December 3.

Since it strikes me as unlikely that the organisers are not aware of these realities, I’m forced to conclude that there is something else at the heart of this dispute. 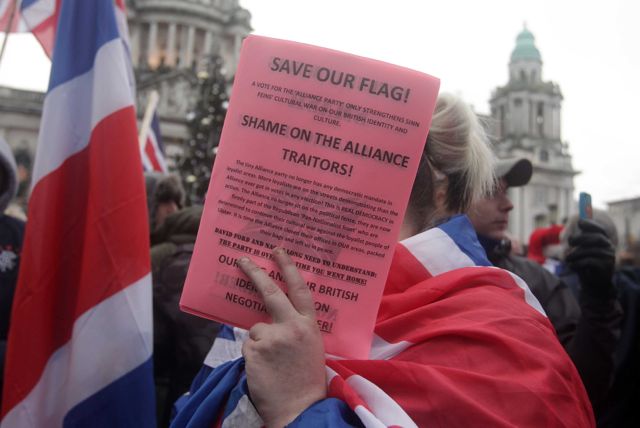 I suspect that the authors and distributors of the now infamous joint attack-dog leaflet against Alliance assumed that the protest would be a one day wonder.

The leaflet would give them a chance—so they thought— to do a bit of political/electoral point-scoring in the run-up to the debate and vote (which they always knew they were going to lose) and allow a few hundred Belfast unionists/loyalists to jeer Alliance councillors and dump the blame squarely and noisily on their doorsteps.

But it didn’t work out like that. The protests snowballed and turned ugly: and what had been an issue about the Union Flag became a much bigger issue about violence, bullying, death threats, attacks on the police and millions of pounds worth of lost trade in the countdown to Christmas.

It became an issue about unexpected divisions within the DUP, with MLAs, MPs and councillors openly defying the advice of Peter Robinson.

It became an issue about Mike Nesbitt’s almost total loss of control of his party: Belfast councillors choosing not to consult him, MLAs turning up at protests (against his initial instructions), the withdrawal of the whip from Basil McCrea and the further isolation of John McCallister.

Indeed, a few days ago a very senior member of the UUP—and important Nesbitt supporter during the leadership election—asked me ‘can he survive until next year’s AGM’?

A number of MLAs, councillors and influential constituency activists are ‘very concerned’ about how close the UUP has now become to the DUP. 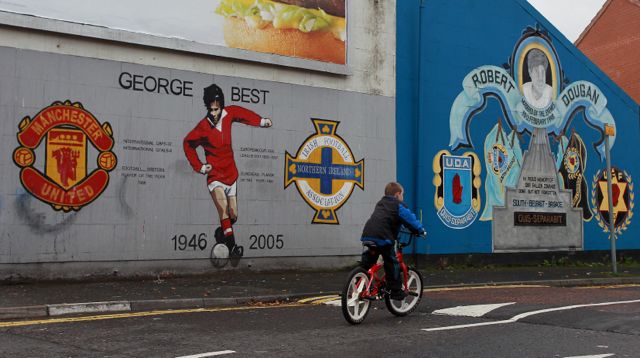 It became an issue for the PUP and an array of self-styled ‘community workers’ from within the loyalist community, who were forced to admit that they weren’t in control of events on the ground.

It became an issue about the nature of the relationship between mainstream unionism and working class loyalists, many of whom believe that they have been abandoned and sidelined since 1998.

The truth, however, is that working class unionists/loyalists have almost always been sidelined by mainstream unionism. Yes, they were dragged out as voting fodder or muscle-on-the-street as and when required, and there was the occasional token working class ‘Prod’ elected to the back benches, but generally speaking they were never an influential voice at the heart of mainstream unionism.

When they rowed in behind the Belfast Agreement it was–I think–because they believed (or were encouraged to believe) that they would finally achieve political parity.

For years they looked on with envy as Sinn Fein delivered on the ground for their working class base, as well as reaching out more widely to a middle class vote and getting their platform included in the Programme for Government.

They feel disconnected, too, from mainstream unionism, claiming that neither the DUP nor the UUP, let alone the TUV, UKIP or the local Conservatives speak for them, or even understands them.

When it was founded in 1971 the DUP tapped into the anti ‘big house’ unionism of working class loyalist/unionists who were hostile to the reforms of O’Neill, Chichester-Clark and then Faulkner.

William Craig’s (a stereotypical example of the unionist middle class) Vanguard Party also tapped into that working class discontent and fear. Many of the young men who were the target audience for Vanguard and the DUP in the early 1970s ended up in the UDA, while others drifted into the UVF.

Interestingly, the unionist/loyalist vote has not rallied around either the PUP or Gary McMichael’s Ulster Democratic Party (which has now disappeared). Does that suggest that they are reluctant to vote for parties which are linked to loyalist paramilitarism?

Does it further suggest that their reluctance to vote for them may be linked to a perception that these paramilitaries are too busy lining their pockets from criminal activity or too likely to have been double agents for various security forces?

Or maybe they won’t vote for them because, unlike Sinn Fein, they don’t seem to deliver for them.

What has been apparent over the last few weeks is that there is no central, coordinated message from the protesters. While there is clear evidence of disconnect and disengagement, there is very little evidence of a ‘we-must-tick-the-following-boxes agenda.’

And no new spokesmen to put their case articulately and non-threateningly to the media and wider public. Put bluntly, you can’t easily communicate behind a mask and nor can you advocate democracy while holding a brick.

Yet it needs to be remembered that the unionist/loyalist working classes represent a significant demograph—with probably enough votes to add a few seats to the unionist tally on Belfast City Council and maybe even an extra 1 or 2 MLAs.

But mobilisation is something they need to do for themselves. Being patted on the head by the DUP or UUP—with vague promises to ‘listen to your concerns’ is not the answer.

The answer lies in creating a brand new left-of-centre working class vehicle which isn’t linked to loyalist paramilitaries. There is a legacy to be dealt with, but it’s a legacy of isolation stretching back to 1921 which kept working class issues well away from the agenda of successive unionist governments.

Judging from tweets I have received over the past three weeks there are a number of people who seem able to make a case and who appear capable of genuine political thinking. 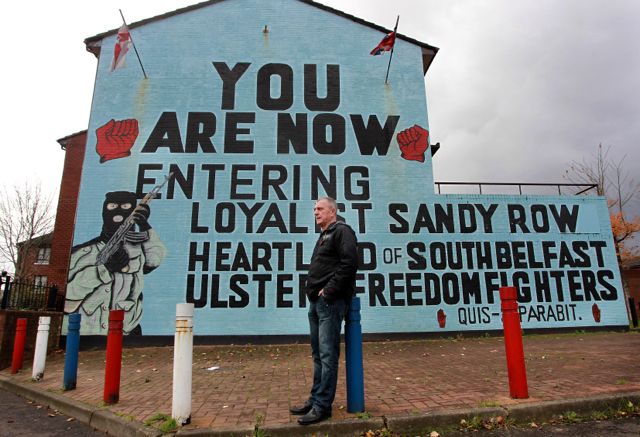 Leading loyalist Jackie McDonald pictured on Belfast’s Sandy Row before the removal of the famous mural.

The Union is safe. There is not going to be a united Ireland anytime soon: so they must not let themselves be distracted by people in the DUP and UUP who will try and tell them that a new party will just split the vote and play into Sinn Fein’s hands.

That’s the argument they have heard for almost a century: an argument that confines them to their own areas and kept in their place.

Mainstream unionism quite likes the idea of the loyalist/unionist working classes being hyped up by flags and symbols. It doesn’t want them properly organised and mobilised as a separate political party. And that’s because mainstream unionism doesn’t have a socialist bone in its body.

So when you hear Peter Robinson and the increasingly hapless Mike Nesbitt talking about using a Unionist Forum to find a solution to the flags issue, you can bet your bottom dollar that it will have very little to do with a long term thought-through socio economic agenda built on better education and engagement with the political process.

Rather, it will consist of throwing a few million pounds into an array of initiatives and promising to fly the flag a few extra days.

I have argued many times in favour of the emergence of a new generation of post-conflict parties in Northern Ireland: parties which have a real chance of attracting back those who have stopped voting and those who have never acquired the habit in the first place.