You are at:Home»News & Current Affairs»The new ‘Us and Them’ in Unionism
Social share:

When one hears a single drumbeat during the marching season in Northern Ireland one ought to recognise the hand behind that thump on the drum senses ‘the hand of history.’

Professor John Brewer in a very fine exposition of Protestantism and the Planter on eamonnmallie.com elucidated this sense of being ‘a chosen people’ who like Moses led his people into the Promised Land in settling here.

Brewer further argues that during the last century and contemporaneously we are witnessing an ongoing erosion of that innate intuitive sense of superiority so quintessentially part of the DNA of the Planter.

Professor Brewer’s analysis helps us to understand where Loyalism is today. To progress this thesis we have to draw a line of distinction between Loyalism as articulated by Billy Hutchinson and the DUP and Ulster Unionism.

Flags emblems, parades, street names, loss of UDR, RUC, elevation of the Irish language, more GAA coverage on BBC, closure of local Protestant schools are all perceived by Loyalism as part of a ‘Republican Cultural War’ being waged against them today.

The lowering of the Union flag on Belfast City Hall to designated days crystallised a further sense of loss and diminution.

This touched a raw nerve which privately one senior DUP member told me “caught us by surprise.”

Those taking part in the ‘flag row’ have no real empathy or sympathy with the ‘higher politics’ as paraded by Peter Robinson and the DUP claiming ‘the Union is secure’ etc.

These street protesters who live in Sandy Row, The Village and the Lower Shankill are only too aware that their offspring is shunned by grammar schools even though these children live within a stone’s throw of these seats of privilege which are highly resourced.

A Protestant mother of two boys from a working class estate said to me “all that matters to our fifteen year olds in our areas is ‘the Organisation.’ They see the bling and the big cars and they want to identify with those.”

Ulster Unionist Party leader Mike Nesbitt, he who wants more Campbell Colleges, spoke of ‘a disconnect’ recently in working class Protestant areas. Hello Mike… Where have you been living?

The penny has dropped… You have discovered there is a disconnect.

Ministers scooting in and out of these rundown areas in high end four wheel drives cut no ice with poor Protestants.

They want to know what are they getting from Northern Ireland’s new ‘political dispensation.’

Large private houses on the top of hillsides, large salaries and rubbing shoulders with the ‘big boys’ on a world stage are fine but moving away from people at the bottom of the pile is dangerous. 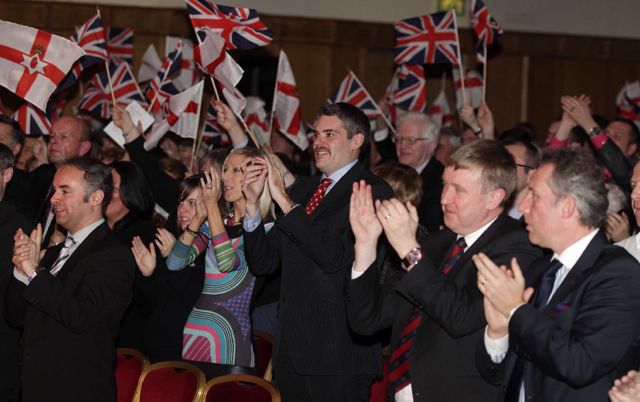 One can argue the DUP is the majority in Carrickfergus Town Hall but the angry protesters didn’t spare their bile on DUP councillors either when they stormed the Council Chamber.

What we are now witnessing is the emergence of a new ‘us and them’ in Loyalist Unionism.

This is a dangerous development.

It is not an accident that the Douglases, McCreas, Kingstons, etc are hanging onto the coattails of the street protesters in defiance of party leader Peter Robinson calling on the protesters to go home.

Hundreds of votes in these areas can decide electoral success or political wilderness.

All politics is local. It is better to be with “them” just in case.

Who could possibly call the outcome in a constituency like east Belfast in the next election.

If the PUP vote was loaned to Naomi Long of the Alliance Party in protest against Peter Robinson does it automatically mean it will return to the DUP next time?

‘Us and Them’ in Unionism could be a bigger factor than we think.